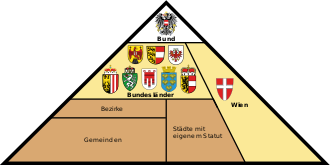 Below the federal government, the political structure of Austria according to regional authorities works as follows:

The Austrian federal states and their capitals:

The federal states of Austria

The lowest administrative units are the municipalities . They take care of the communal self-government assigned to them. Matters of building regulations or the local security police are part of their area of ​​responsibility, which they take care of through the elected councilors and community representatives as well as the mayor. The municipalities are purely administrative units without legislative powers.

Unlike in Germany, for example, there are municipalities across the board, because according to Art. 116 B-VG “every property must belong to a municipality”.

Further subdivisions, such as into districts (municipality parts, local parishes, local administration parts, localities, city districts) are not prescribed by the legislature, but are quite common in local government. The mayor but usually get only very limited areas of responsibility and respect to the community organs frequently subject to directives.

Vienna is a special case in the Austrian administrative structure. It is both a federal state and a statutory city (and thus at the same time a district administrative authority and political municipality), so it also handles the levels of state, district and municipal agendas.

The state and local government are formally strictly separated, but the people involved are always the same. By virtue of his office, the mayor of Vienna is also provincial governor. By virtue of its office, the Vienna City Council is also the Vienna Landtag - however, the chairmanship of the city council meetings and the Landtag meetings is held by different people. Incidentally, the federal capital is divided into 23 municipality or city districts, which, however, cannot be compared with either the district administrative authorities or the municipalities in the other federal  states.

In addition to the administrative structure in the true sense of the word, there are other administrative, functional and political structures in Austria: