In addition to the continental European heartland, the Kingdom of Denmark also includes the autonomous outer regions of the Faroe Islands and Greenland . The constitutional unity of motherland and former possessions is known as the "Reichsgemeinschaft" (Danish rigsfællesskabet ). Since January 1st 2007, the administrative structure of the Danish heartland comprises five regions and 98 municipalities. The districts / districts (Danish amt ) were abolished in the course of a local government reform. Your responsibilities have been divided between regional and local levels. 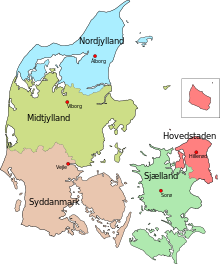 The main tasks of the regions are:

Compared to the previous administrative districts, the tasks of the regions are limited. The regions no longer have an independent right to tax, but are financed by state key allocations.

With the enlargement of the municipalities in 2007, the municipal tasks were expanded. This should enable the municipalities to further develop and streamline the public service . However, opponents feared that the gap between citizens and local politicians could become too great and that rural areas and villages in particular could suffer as a result of austerity measures. The Association of Danish Small Islands fears consequences such as school closings , reduced care for the elderly , restrictions in ferry traffic and restrictions in the maintenance of the dykes .

Christiansø and Frederiksø are the only areas in Denmark that are not part of the municipality. As a result, residents do not pay any municipal tax. The islands are subordinate to the Ministry of Defense , which is represented by an administrator on Christiansø.

The Landstinge in the Middle Ages
→ Main article : "Jutland" in the article Syssel

The oldest division of the country were the Syssel and Harden , which emerged in the early Viking Age . The Landstinge above the Hardentinge existed in Viborg ( Nørrejylland ), Urnehoved ( Sønderjylland ), Ringsted ( Danish Islands ) and Lund ( Skåneland ). In the Middle Ages, the division into fiefdoms followed a feudal model, mostly subordinate to a manor house . Around 1200 the Duchy of Schleswig was formed, which remained connected to the kingdom as a royal Danish fiefdom, but developed its own administrative structures in part (see Ämter und Harden in Schleswig ). 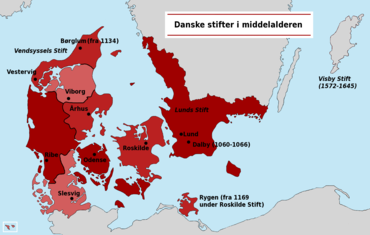 Danish dioceses in the Middle Ages

With the Reformation, the dioceses were in 1536 deaneries divided, the limits on the Harden -oriented.

After the introduction of absolutism , King Friedrich III. Divide Denmark into 44 administrative districts (Danish amt ) in 1662 .

For the duchy of Schleswig, which is connected as a fief and in personal union with Denmark, see the article Ämter und Harden in Schleswig .

After the formation of the entire Danish state , the administrative districts were enlarged and redesigned in 1793. This structure was essentially retained until 1970.

1 These offices were set up in 1920 following the cession of North Schleswig to Denmark on the basis of a provision in the Versailles Treaty .
2 Sønderborg Amt and Aabenraa Amt were partially merged in 1932 to form the Aabenraa-Sønderborg Amt .

On April 1, 1970, the 23 offices (administrative districts) were replaced by 14 municipal authorities. The municipalities of Copenhagen and Frederiksberg carried out the official municipal tasks themselves because of their special requirements (metropolitan area).

On Langeland , two referendums were held in 1992 and 2000 in the island's three municipalities. One reason was to avoid a feared possible merger with Svendborg Municipality . Sydlangeland Commune was against amalgamation in both. On February 12, 2003 there was a referendum only in the Sydlangeland municipality. The last one was positive for a merger, which was only implemented on January 1, 2007 in the course of the state-wide municipal reform.