Frederiksberg is one of 29 municipalities in the administrative region of Hovedstaden . Until January 1, 2007 it had the status of an official municipality .

In Frederiksberg there is a production facility of the Porcelain Manufactory Royal Copenhagen, founded in 1775, and a contact point of the BGI for archiving sequenced genomes .

The city coat of arms shows three falcons, this motif was also used to name some buildings.

The Frederiksberg settlement goes to King Friedrich III. back, who on June 2, 1651 gave twenty farmers from the island of Amager, southeast of Copenhagen, permission to settle in Ny Hollænderby (New Dutch Town); Amager had been reclaimed by Dutch farmers.

From 1700 to 1703 Frederick IV had a summer palace built on Valby Bakke (Valby Hill), called Solbjerg . It was inspired by the king's travels in France and Italy. According to him, the received Frederiksberg Castle and the settlement Ny Hollænderby their names to the castle hill.

The city grew rather slowly, around 1800 there were only 1,200 inhabitants. After 1822, when the so-called military demarcation line around Copenhagen was moved and finally lifted, Frederiksberg's real growth began. In 1857 the place was raised to an independent municipality, in 1860 the market rights followed , in 1864 the connection to the railway .

Parishes in the commune 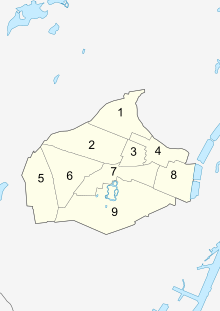 The city of Frederiksberg consists of the following parishes ( Danish : Sogn ):

Municipalities in the Hovedstaden region