C is an enclave in A and an exclave of B in A.

In a figurative sense, one also speaks of enclaves when there is a sprinkling of another area in another geographical area, for example in areas of distribution of animal or plant species (for example a coniferous forest enclave in a large deciduous forest), settlement or language islands , different denominational areas, etc. .

Areas on the water

In the case of areas by the sea or inland lakes, most do not speak of an enclave if the areas have a continuous connection between their territorial waters and the stateless high seas or another part of the same state.

On the other hand, Campione d'Italia is a real enclave on the water , because Lake Lugano between Campione and the other Italian part of the lake is Swiss territory .

Islands are generally not viewed as enclaves. Exceptions are rare cases in which islands are completely surrounded by the territorial waters of another state, such as the Argentine island Martín García in the Uruguayan part of the Río de la Plata or the Malawi islands of Likoma and Chizumulu in the Mozambican part of Lake Malawi . The French islands of Saint-Pierre and Miquelon off Canada are within the 12-mile zone, but have contractually granted access to the open sea and are therefore (politically) not considered enclaves.

Some areas have a land connection to the rest of their own national territory, but can be better reached via the territory of another state. The Austrian Kleinwalsertal , whose only road connection leads to the German Oberstdorf , is just like Samnaun in Switzerland such an example. Such areas, while not enclaves, have many of their characteristics. They are occasionally called Pene enclaves (based on the English peninsula for " peninsula ").

A de facto functional enclave can also exist if there is a road connection, but due to geographical conditions the locality is completely oriented towards a different area. One example is the Lower Saxony Büscherheide in Eggetal that, ecclesiastical, cultural, etc. in many areas of daily life, a part of post de facto North Rhine-Westphalia is.

Enclaves in other local authorities 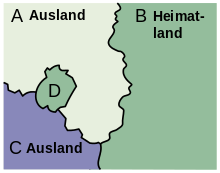 D: Exclave that is not an enclave

With the exception of independent states, all enclaves are also exclaves . If you look at other administrative levels, the same applies: Every enclave is an exclave, unless it represents a closed unit on the level under consideration. Bremerhaven is an exclave of the state of Bremen ; the state of Berlin , on the other hand, is an enclave in Brandenburg , but not an exclave. The same applies in Austria to the Province of Vienna , which is completely surrounded by Lower Austria .

There are several second-order enclaves worldwide, involving two countries. Examples of this can be found at

Until the Indian-Bangladeshi border treaty of 2015 , there were also sub-enclaves in the border area of ​​Bangladesh and India near Kuchlibari. With 198 enclaves, 80% of all enclaves worldwide were located there; 24 of them were second-order enclaves. In addition, there was a third order enclave: an Indian enclave in a Bangladeshi enclave, which was in an Indian enclave within Bangladesh.

Enclaves of the second or higher order are also conceivable with a number of participating different countries corresponding to the ordinal number. B. Country C enclosed by country B, this in turn enclosed by country A. However, this case does not currently occur anywhere in the world.