The Schönhengstgau was a German-speaking island in the former Czechoslovakia.

A language island is understood to mean a relatively small, closed language and settlement community that is located in a larger foreign language area.

This article or section needs to be revised: Plautdietsch is mentioned in "2.2.18 In Übersee" and in "3.18 Plautdietsche Sprachinseln". If Plautdietsch is a variety of German, the language islands in 3.18 under 2.2.18 belong as secondary language islands. If Plautdietsch were an independent language (which would then also have to apply to Pennsylvania and others and is hardly tenable), it should not be listed in 2.2.18. Only Yiddish-speaking communities outside of Central Eastern and Eastern Europe can be regarded as Yiddish language islands in 3.12 because of the condition “that the language is still spoken in the country of origin”, which can be regarded as the “country of origin” after the development of Yiddish into a separate language. This condition also forbids viewing Sorbian, Frisian, Rotwelsch and others as linguistic islands.
Please help to improve it , and then remove this flag.

Due to various settlement movements that began in the Middle Ages (see Deutsche Ostsiedlung ) and did not come to an end until the middle of the 19th century, there were German linguistic islands until the end of the Second World War, and in a few cases until today, that spanned large parts of eastern and East Central Europe were or are scattered. The smallest of these linguistic islands are just a few small villages, while the largest are almost closed German-speaking areas (e.g. Transylvania) in the middle of foreign-language areas. These linguistic islands were found in large parts of Poland , the Baltic States , Belarus , the Ukraine , the Czech Republic , Slovakia , Hungary , Romania , Slovenia and Croatia . Some linguistic islands were also located in what is now Serbia .

In addition, there were German language islands in the Caucasus region , near Saint Petersburg and in some places in the Urals and Siberia .

When colonizing the New World, too, German emigrant communities often came together, each of which came from a specific area of ​​origin and who settled relatively closed in the destination area. Especially in the Midwest of the United States , in western Canada , in southern Brazil and in southern Chile, there are still German-language islands in various well-preserved areas.

As a result of the First World War and finally again in the course of the Second World War, the need arose in the German settlement areas of North America to demonstrate loyalty to the newly-found homeland. a. also to show that one no longer used the standard German language or the various German dialects. This led to the fact that the overwhelming majority of German-speaking islands in North America are now only relicts, with German being pushed out of the public and most families since the 1940s at the latest.

Language islands in the German-speaking area

A larger number of Burgenland Hungarians also live in the provincial capital Eisenstadt / Kismarton, or the 2001 census shows a Hungarian-speaking population of 5% to 10% of the total population for Frauenkirchen / Boldogasszony, Lutzmannsburg / Locsmánd and Schachendorf / Csajta.

Outside the closed German-speaking area 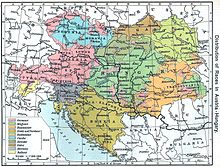 The inhabitants of the German colonies of Swabian radical Pietists in Azerbaijan , which had existed since 1818, were deported in 1941.

In Jutland to 1759/61 settled Palatine families that maintained until 1870 German church and school:

In Southeast Jutland, a Moravian congregation was founded in 1772

The inhabitants of the German colonies of Swabian radical Pietists in Georgia , which had existed since 1818, were deported in 1941.

The ethnic minorities in Italy are protected by Law No. 482 “For the Protection of Historical Linguistic Minorities” of December 15, 1999.

in the autonomous region of Aosta Valley

in the province of Vercelli

in the province of Verbano-Cusio-Ossola

(actually except for Campello Monti and Ornavasso language peninsulas, see under Gressoney)

Adjacent valleys in which German / Cimbrian was spoken until the 19th century:

Municipalities in which (partially) heels was spoken in the past:

The Cimbrian in the seven parishes only leads a niche existence in Roana and its district Mezzaselva (Mittewald) .

Cimbrian in the Thirteen Congregations is only spoken in Giazza / Ljetzan.

Most of the Kazakh Germans have now emigrated to Germany .

Most of the Kyrgyzstan Germans have now emigrated to Germany .

By 1918 there were around 3,300 closed, largely denominational and ethnically uniform German settlements in Russia. After the German attack on the Soviet Union in 1941, Stalin had most of the Russian Germans deported to the Asian part of the Soviet Union .

Minorities of German origin still live in the following regions:

The majority of Germans living in Russia have emigrated to Germany in recent years.

In the area of ​​what is now the Federal Republic of Germany, French or Old French dialects were spoken in Wallonia , Huguenot and Waldensian communities until after the Second World War. For a long time, services were preached in French at least once a month. In Louisendorf near Marburg , French is z. B. only died out around 1990.

The Walloons, Huguenots and Waldensians settled in the territories in particular

Since the Second World War, the Yiddish language has been spoken by secular, predominantly old Jews in Argentina ( Balvanera district in Buenos Aires), Australia, Brazil, Israel, Canada, Mexico and the United States (focus on New York region ), for example others used today predominantly by Hasidic communities in the USA ( Williamsburg in Brooklyn ), Canada (Montreal, Toronto), Israel ( Me'a She'arim [Jerusalem], Bnei Berak ), Great Britain ( London ) and Belgium ( Antwerp ) . At the end of the 1970s, Kiryas Joel, a settlement of Hasidic Jews in New York State, was established that today has around 20,000 inhabitants, around 90% of whom are Yiddish-speaking.

A small Yiddish-language island has survived in the Jewish Autonomous Oblast in the Far East Federal District on the border with the People's Republic of China . The newspaper Birobidschaner Schtern appears twice a week .

See the article on the Plautdietsch language