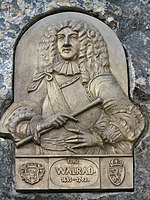 Prince Wilhelm Ludwig von Nassau-Saarbrücken left three sons, who carried out a new division of the Nassau area on March 31, 1659: Johann Ludwig received the rule of Ottweiler , Gustav Adolf received the county of Saarbrücken and Walrad received Usingen and became the founder of the new branch.

With the extinction of the lines in 1723 Saarbrücken, 1728 Ottweiler and Idstein fall back to Nassau-Usingen. In 1735 Saarbrücken was divided up again.

The residence of the House of Nassau-Usingen had been the city of Usingen im Taunus since 1659 . Prince Walrad had a new castle built here. In 1744, Prince Karl moved the residence to Biebrich Castle in Biebrich a. Rhine . The castle was previously used as a summer residence.

The duchy also included parts of Solms , Wied and other areas. The church property is secularized and the imperial knights mediatized . These were awarded to the Duchy of Nassau as compensation for the loss of territory on the left bank of the Rhine after the Reichsdeputationshauptschluss . In 1866 the Duchy of Prussia was annexed and part of the Hesse-Nassau Province . In 1945 most of the former Duchy of Nassau became part of the State of Hesse .

In 1728 the offices of Idstein , Wiesbaden , Saarbrücken , Ottweiler and Lahr were added. The previous states are now divided into the offices of Usingen , Wehen and Burgschwalbach .

In 1735 the offices of Saarbrücken and Ottweiler were spun off again. In 1797 these two offices were returned to Nassau-Usingen. With the Reichsdeputationshauptschluss Nassau-Usingen finally lost the areas on the left bank of the Rhine, but received extensive areas as compensation.

In the first third of the 18th century, a uniform administrative system developed in Nassau-Usingen. While the court was previously the only central administrative authority with the court master at its head and the individual offices had a great deal of leeway (also due to the spatial fragmentation), new structures were introduced from 1718 during the reign of Charlotte Amalie. Usingen was expanded as the sole government center, the influence of the offices decreased. Only Saarbrücken retained greater independence (due to spatial separation and size).

First, Charlotte Amalie separated the court administration from the state administration. With the chancellery regulations of 1729, administration and justice were formally separated on the upper level. Formally because officials served in several functions at the same time. The most important body remained the court. The chief steward was also the first secret council . The office director, also with the rank of a secret council, headed the secret office. This consisted of the government councils of the noble and the learned bank and was responsible for all government and administrative matters. It was organized on the provincial principle . The councils had their seat in the offices since the 1730s.

The court chamber was responsible for the finances of the principality, and was headed by the court chamberlain. The government college was the supreme judicial authority. It was the appellate body for the processes in civil and criminal matters. The first instance was the (higher) offices and the government in Saarbrücken. The government in Saarbrücken and the senior consistory in Usingen continued to exist as higher authorities . There was no secret council as an independent authority. Foreign policy was dealt with by the first secret council.

This administrative structure existed until 1769 (albeit after the residence with seat in Wiesbaden was relocated). In that year Karl Friedrich Freiherr von Kruse took up his position as the first Privy Councilor. In order to persuade Kruse to leave his position as Reichshofrat in Vienna , the position and the title of president of all colleges and director of the court chamber was awarded. The Chancellery Regulations of 1770 renamed the Secret Chancellery to “State Government” and the Government College to “Court Court”. The state government, court court, court chamber and consistory each received a director as head. Kruse, as the district president, was in charge of the four colleges.