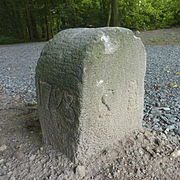 The county of Solms-Rödelheim was a territory in the Holy Roman Empire of the German Nation from the early 17th century to the beginning of the 19th century .

The county belonged to the Upper Rhine Empire . The administrative centers were the city of Rödelheim west of the city of Frankfurt am Main and Assenheim Castle . The county was spread over several non-contiguous areas.

The county of Solms-Rödelheim was ruled by the line of the same name of the noble family Solms , Solms-Rödelheim . Today the territory of the former county belongs to the Rhine-Main area in the south of the German state of Hesse .

The county of Solms-Rödelheim had around 5300 inhabitants at the end of the 18th century. It was composed of:

There were also a large number of individual slopes in other localities.

The county was divided into offices :

Model of the Rödelheim Castle

Until the late 17th century Solms-Rödelheim had no central administration. In the offices, a bailiff managed the business and a cellar was responsible for the finances. Since the Rödelheim winery was by far the largest in the county and was located at the court, it also took on the tasks of central and court administration.

In 1682 the chancellery was created as the highest administrative authority and in 1695 the office of the land cashier, to which the rent chamber was subordinate, as the county's highest financial authority. With that the cellars disappeared and the officials were subordinated to a money and fruit clerk who administered the income of the rent chamber. Both offices were partially merged in the course of the 18th century.

With the Reichsdeputationshauptschluss , Solms-Rödelheim received the Arnsburg monastery and the Altenberg monastery as compensation for the lost power on the left bank of the Rhine .

With the Rhine Confederation Act of 1806, state sovereignty over the county of Solms-Rödelheim fell to the Grand Duchy of Hesse. This incorporated the area into the Principality of Upper Hesse (from 1816: "Province of Upper Hesse"). This happened with the restriction that the count retained the rank of landlord and he continued to exercise sovereign rights in administration and jurisdiction in the ancestral county . He was left with the title and the title of noble highness . The senior of the family was a hereditary member of the first chamber of the estates as a registrar by the constitution of the Grand Duchy of Hesse of 1820 .

Known members of the family were: