Estates of the Grand Duchy of Hesse

The state house in Darmstadt (1888), seat of the state parliament

Land estates existed both in the Landgraviate of Hessen-Darmstadt and in the Duchy of Westphalia , which had been largely added to the Landgraviate after 1803 . While their effect in the Landgraviate was small, the estates of the Duchy , based in Arnsberg, had managed to enforce and maintain considerable rights to have a say in the dispute with Kurköln . As part of the founding of the Grand Duchy and the dissolution of the Old Kingdom , the estates were dissolved by Grand Duke Ludwig I in 1806 .

From the founding of the Grand Duchy to the March Revolution 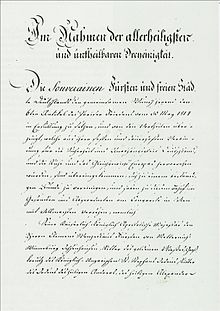 The Grand Duke was a staunch supporter of the monarchical principle and was critical of demands to restrict his power. On the other hand, a constitution was urgently needed, since the diverging, new and old parts of the country had to be integrated and Section 13 of the German Federal Act contained a corresponding requirement.

In the winter of 1818/1819 a number of towns and municipalities in the Grand Duchy elected “wild” state parliaments without the consent of the government. These met in Grünberg and Zwingenberg .

In March 1820, Minister of State Karl Ludwig Wilhelm von Grolman published a provisional “ Landstands constitution ”, which was published as a grand-ducal edict and on the basis of which the first state parliament was elected. On December 17, 1820, the constitution of the Grand Duchy of Hesse was enacted, which also provided for the establishment of estates with a two-chamber system .

The MPs were not subject to any instructions.

The first chamber served to represent the nobility and high office holders. In addition to the princes of the grand ducal family - the grand duke himself, as sovereign, was not a member of the first chamber - it was above all the landlords , the heads of the mediatized , formerly imperial families. These had lost their sovereignty in 1806 in connection with the formation of the Rhine Confederation (or by decision of the Congress of Vienna: Principality of Isenburg ) and were to be compensated politically.

Furthermore, the heads of the Catholic Church (Diocese of Mainz) and the Protestant regional church in the Grand Duchy were represented by office. For the Catholic Church this was the Catholic regional bishop, the Bishop of Mainz , for the Protestant side, a Protestant clergyman raised to the office of prelate by the Grand Duke for life . The Chancellor of the State University in Giessen was also a member because of the office . This representation of the university took up the old-class tradition. The university was already represented in the estates in the old empire. In addition, the Grand Duke was able to give up to ten citizens a seat in the Chamber due to special merits.

The prerequisite for being allowed to take his seat in the first chamber was the completion of the 25th year of life.

The deputies were elected for six years. During this period, there were two parliamentary periods. However, the Grand Duke was able to dissolve parliament, which resulted in a new election. The mandates of outgoing MPs (through non-confirmation, death or resignation) were filled in by-elections . These regulations were valid (apart from the revolutionary years 1848 to 1852) until 1875.

It was an indirect choice over two levels. The voters of the respective group elected representatives, these electors and these the members of parliament.

The representatives of the cities and the rest of the country were elected in one-person constituencies . The electoral district division was initially based on the cut of the offices .

The right to vote was limited. In principle, only taxable men were eligible to vote. In the first stage (the election of the authorized representative) the eligibility to vote was linked to the completion of the 25th year of life and to a tax payment of at least 25 guilders per year. In the second stage, the plenipotentiaries each elected a maximum of 25 electors who (like the MPs themselves) paid at least 100 guilders (nobles 300 guilders) direct taxes. Electors had to be 30 years old and belong to the 60 highest taxpayers in the respective constituency .

Thus participation was in fact limited to a small number of wealthy nobles and citizens. No diets were paid either . The MPs themselves had to bear the costs of exercising their mandate. It was an honorary dignitary parliament .

Central was the traditional right of the estates to have to consent to the collection of taxes . There were also initial approaches to budget law . The (three-year) budgets first had to be submitted to the 2nd Chamber. In contrast to modern parliaments, the estates were not bearers of state sovereignty . The estates were forbidden under threat of punishment to deal with objects that were not explicitly part of their field of activity. The Grand Duke was responsible for legislating, not Parliament. Also, the Grand Duke alone and at any time had the right to convene, adjourn, dissolve or close the estates.

In the twenties, the government could regularly rely on majorities in the estates. However, that changed with the July Revolution in France in 1830. The activities of liberal -minded citizens across Europe increased significantly . The censorship of the Karlovy Vary resolutions lost its effect and the restoration seemed to have come to an end. In autumn 1830 there were peasant riots in the province of Upper Hesse , which were militarily suppressed.

In this politically explosive situation, Grand Duke Ludwig I died and his reactionary-minded son Ludwig II succeeded him on April 6th. He renewed the censorship regulations, tightened the police measures against liberal and democratic-minded people and also brought the state parliament against it with the demand that the private debts from his time as Hereditary Grand Duke in the amount of 2 million guilders be imposed on the state. The chambers oppose this matter with a clear majority and advocate further liberalization . In December 1832, after the revolutionary events had subsided, Ludwig II dissolved the estates and dismissed liberal government members (including Heinrich Karl Jaup ) and civil servants (including Heinrich von Gagern ).

After the new elections that followed, a conservative majority loyal to the monarchy came together again in the estates. The liberal opposition , led by von Gagern, achieved a majority in the 6th state parliament, which was opened on April 26, 1834. Ludwig II again dissolved the state estates in October 1834. From the 7th Landtag (1835), Ludwig II could again count on inclined majorities in the chambers. The liberal opposition was marginalized.

The tenth state parliament (1844-1847) dealt with the civil code and thus triggered conflicts between the province of Rheinhessen , in which the modern French civil code still applied, and the other provinces, in which old monaristic law still prevailed. The attempt to summarize the different legal traditions in a uniform body of law was violently rejected by the Rheinhessen MPs as a step backwards. Nevertheless, there was a majority in favor of the new civil code.

In Hesse, the pre- March ended with the state elections for the eleventh state parliament in December 1847, in which the liberals again achieved a majority. This was preceded by the founding of parties by the Liberals at meetings in Heppenheim and Offenburg in autumn 1847 as well as several bad harvests and starvation winters.

Ludwig II did not dissolve the Landtag, but postponed it to February 28, 1848. The session of the second chamber was influenced by the February Revolution in France. Gagern's demand to create a German national assembly, put forward in the state parliament , was accepted by the state estates. At the latest with the acceptance of Theodor Reh's request for a fundamental “change in the previous system of government that was not in line with the wishes of the Hessian people”, the March Revolution had also reached the Hessian estates. The previous chief minister Karl du Thil was dismissed on March 5th, Heinrich von Gagern as prime minister of the March government and Hereditary Prince Ludwig III. was appointed "co-regent".

The most important demands of the liberals ( freedom of the press , armament of the people, freedom of assembly , withdrawal of the police penal code, the guarantee of the Rhine-Hessian institutions, free party formation and the introduction of jury courts ) were decided by government edict.

The change in the electoral law was crucial in order to form a more democratic state parliament. The electoral law of 1849 provided for a direct and more general election of the deputies of the second chamber. The first chamber should also be chosen. Here, however, a census option was still provided.

The state parliament after the victory of the reaction

Ludwig III. With the edict of October 9, 1850, suspended the democratic electoral law and passed a new electoral law for the election of an extraordinary state parliament. The electoral rules were the same as before the revolution.

In 1861 the Hessian Liberals reorganized themselves in the Hessian Progressive Party . In the state elections in 1862, the Progress Party under August Metz achieved a landslide victory.

With their liberal majority, the estates demanded that press censorship and other reactionary laws be lifted, but they could not get their way. The Dalwigk government also remained in office. However, by adopting the Franco-Prussian trade agreement and making significant cuts in the budget in 1864, the state parliament was able to set liberal accents.

In 1884, Franz Jöst was the first social democrat to be elected to the state parliament.

In 1911 there was another reform of the electoral law. The 35th state parliament was already elected under this new electoral law. Due to the First World War , the 1914 elections were no longer held. Only after the November Revolution was a Landtag re- elected in 1919 - then in the People's State of Hesse during the Weimar Republic .

For the elections before 1862, it is not sensible to assign the delegates to parties. Parties in the current sense were only formed at this point in time. For the time before, it can only be roughly stated whether the MPs are conservative , i.e. close to the government, or liberal , i.e. H. were classified as oppositional.

The seat of the estates of the Grand Duchy of Hesse was in the Estates building on Luisenplatz in Darmstadt. The residence of the Grand Duke ( Altes Palais , today the Luisencenter is located there ) and the seat of government ( college building , today the seat of the Darmstadt regional council ) were also located on this square . The Ständehaus, formerly the Palais of Landgrave Christian , was rebuilt accordingly from 1836 to 1839 and completely destroyed in the Second World War, as was the Old Palace. Today, the headquarters of Sparkasse Darmstadt is located in its place .

The presidents of the estates

Commons : Landstands of the Grand Duchy of Hesse  - Collection of images, videos and audio files