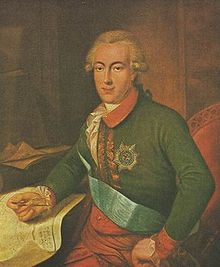 Ludwig was the eldest son of Landgrave Ludwig IX. von Hessen-Darmstadt (1719–1790) and his wife Henriette Karoline (1721–1774), daughter of the Count Palatine and Duke Christian III. from Zweibrücken-Birkenfeld . Ludwig was born in Prenzlau, where his father was stationed in Prussian services. The children were raised by their mother in Buchsweiler , the former residence of the Counts of Hanau-Lichtenberg , while the father mainly stayed in Pirmasens to devote himself to the life of a soldier.

Ludwig studied at the University of Leiden from 1769 and then undertook his cavalier tour to London and Paris. In France he met with d'Alembert and Diderot , among others . In 1773 he traveled with Melchior Grimm to the Prussian court of Frederick the Great , where his sister Friederike was married to the heir to the throne, Friedrich Wilhelm . Finally, in 1773, he attended the wedding of his sister Wilhelmine to the future Tsar Paul I in St. Petersburg . As a Russian general he fought in theRusso-Turkish War 1774 and in the same year he became a Freemason in Moscow in the lodge "To the crowned flag", which belonged to the system of strict observance . In 1776 Ludwig got engaged to Princess Sophie Dorothee von Württemberg , but she was chosen by Catherine the Great to be the wife of Tsarevich Paul after Ludwig's sister Wilhelmine died in childbirth .

After this humiliating incident, Ludwig spent the summer at his sister Luise's court of muses in Weimar , where he was in contact with Johann Wolfgang von Goethe . Even after that Ludwig was in contact by letters, in addition to the Weimar court and Goethe also with Friedrich von Schiller .

Ludwig's reign is marked by the change from an absolutist to a constitutional system of rule in Hesse-Darmstadt. His first decisions were regulations for more religious freedoms for Catholics and Jews in the country.

Through the wars of revolutionary France , Ludwig lost the holdings of the county of Hanau-Lichtenberg on the left bank of the Rhine . After the capture of Mainz , the residence in Darmstadt itself was threatened and was temporarily vacated by the princely family and the government. Through treaties with England and the Netherlands, Hessian troops fought against France, which was ended in 1799 with a declaration of neutrality. Through the Reichsdeputationshauptschluss 1802/3 Ludwig was compensated territorially.

Grand Duke Ludwig I of Hesse and the Rhine

On August 13, 1806, Ludwig joined the Confederation of the Rhine, took on the title of Grand Duke of Hesse and was able to expand the state territory again. He now stylized himself Grand Duke Ludewig I (with an extra "e") and, with a decree of August 13, 1806, announced not only what was a pleasant event for him, but also which territories he had collected on the basis of the Rhine Confederation Act . After the Congress of Vienna and the acquisition of Rheinhessen on the left bank of the Rhine , he added to his title and at Rhine on July 7, 1816 .

In June 1814, he approved Johannes Hess's application to dry out the moat in Darmstadt and to set up the Darmstadt Botanical Garden there.

On March 18, 1820, he gave the country a constitution designed by Karl Ludwig Wilhelm von Grolman after the so-called “wild state parliaments” had come about in Upper Hesse and Starkenburg. The reform efforts by the Prime Minister von Grolman and his successor Karl du Thil were not encouraged by Ludwig, but approved.

Ludwig's policy in the cultural field was mainly characterized by the opening of the court library, the award of scholarships, the promotion of theater and musical life and the work of Georg Moller , who also rebuilt the court theater in Darmstadt and gave Darmstadt a classicist face (“ Moller City ").

After his death on April 6, 1830 in Darmstadt, Ludwig I, like his wife Luise , was buried in the landgrave's crypt in the city ​​church . In 1910 their coffins were transferred to the old mausoleum in Rosenhöhe Park .

Ludwig had the following children from his marriage:

The Rheinhessen town of Ludwigshöhe , which was rebuilt between 1822 and 1830 after being relocated, is named after Ludwig , as is Ludwigstrasse in the capital of the province of Rheinhessen , Mainz, which was granted to it . The Hessendenkmal Finthen commemorates his participation in the siege of Mainz (1793) .