Signing of the American Constitution in 1787, history painting from 1940

Constitutionalism is a term from constitutional history and describes a certain form of government in which a constitution plays a certain role. Depending on the country and language, this can mean something different in detail.

In the Holy Roman Empire there were some important decisions that are now referred to as constitutional documents, and during the period of French rule (from around 1793 to 1814) in Germany there were some states with constitutions. Today, however, these are not actually considered representative constitutions . Such a constitution means that the citizens, or at least some of the citizens, elect a representative body that takes part in the legislation. According to the Federal Act of 1815, which established the German Confederation , a German state should have a state constitution . However, there was no precise definition for it.

After 1815 constitutions were first drawn up in southern Germany, including in Bavaria on May 26, 1818, in Baden on August 22, 1818 in Württemberg on September 25, 1819. Then after 1830, triggered by the July Revolution in France, constitutions were made in some northern German states, including in Hesse on January 5, 1831 , in Saxony on September 4, 1831, in Braunschweig on October 12, 1832 and in Hanover on September 26, 1833. The newly created constitutions contain concessions to the People (partly abolition of serfdom against one-off payments, land, etc.), because these were not imposed, but worked out in agreement with the estates or their representatives in assemblies.

However, even after 1830 there were still enforced constitutions. The largest state in Northern Germany, Prussia , imposed a representative constitution on December 5, 1848 in response to the preceding March Revolution, which called for such a constitution. Austria only finally (after a few earlier approaches) gave itself a constitution ( December constitution ) imposed by the ruler in 1867 .

The rule of the monarch is based on the monarchical principle . This justifies the outstanding and inviolable position of the monarch and traces this back to the divine right, as in the times of absolutism ( Friedrich Julius Stahl , 1845). The monarchical principle states that the monarch has the justification for his actions within himself. It comes to him by virtue of his position and is not granted to him either by the constitution, by the people or by third parties. The king is ruler not on the basis of the constitution, but before the constitution. The constitution is therefore not the basis of the king's rulership, but only its limitation. Thus the monarch himself is the constituent power (see below, constitution-making), that is, pouvoir constituant and not just constituted power, pouvoir constitué . With regard to the position of the people and the representatives of the people, it can be summarized as follows: While the people and representatives of the people require a constitutional title for all political action, the monarch bears this title, i.e. the authorization to act in himself. However, in contrast to absolutism, the state occurs and head of state formally apart. The state's territory is withdrawn from the ruler's legal power of disposal, and his private property is separated from the state property.

A typical example of this is the formulation in Title II § 1 of the Bavarian Constitution of 1818: "The king is head of the state, unites all the rights of state authority and exercises them under the provisions set out by him in the current constitutional document".

The monarchical principle, which goes back to the final act of the Congress of Vienna , served as a reaction to revolutionary and liberal endeavors to ward off any form of popular representation. 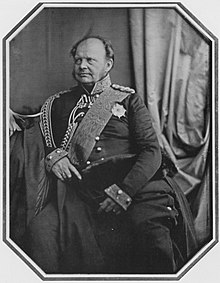 Friedrich Wilhelm IV. Was the king who gave Prussia a constitution in December 1848 . Since he issued it unilaterally, this constitution of Prussia is called an “imposed” (imposed, imposed) constitution.

Legislation could only take place with the joint consent of the king and the parliament. In addition to the sole ownership of the executive, the king was therefore entitled to participate in the legislature . The extent to which a matter had to be regulated by law was therefore decisive for the extent to which the parliament was involved. Only in this case was the consent of the people's representative a mandatory requirement; in all other cases, the king, as the bearer of the government, was solely responsible. The law's reservation was used as a criterion for the participation of the legislature.

Legal regulation was always necessary when there was interference with property and freedom. However, the parliament was not entitled to self-assembly, nor could it take any legislative initiative. At this point came the convocation by the monarch and the law petition as an appeal to the monarch to enact a corresponding legal regulation.

Government and administration were reserved for the monarch. The ministers did not face the monarch as ambassadors for the representative body, but were his assistants appointed by him. The government was thus personally and institutionally independent of the parliament.

The monarch's competence was unlimited, especially in foreign policy, the army constitution and the organization of the administration. There was a legal reservation that restricted the monarch's power. However, the monarch alone determined ordinances, which were often more important than a law because they regulated details and thus the application.

Ministerial responsibility was also important . Even if the monarch himself was inviolable, the representatives of the people paid attention to whether the ministers obeyed the law. In this way, the monarch's actions could possibly also be controlled indirectly. What ministerial responsibility meant in detail depended on the respective constitution, but also on constitutional reality. It was common for the people's representatives to summon the ministers and question them (ministers are accountable). The Wuerttemberg constitution also knew an indictment by the ministers before the state court. The constitution-makers of the 19th century (including the liberal ones) mostly shied away from formally giving the parliament the right to force the government to resign.

Supreme command of the army

The monarch was in command of the army. It was usually sworn in on these - and not the constitution, for example. Acts that followed from the supreme command were not countersigned and were therefore not subject to the approval of the parliament.