In 1753 , the equilibrium of the great powers of Europe achieved in the Peace of Aachen in 1748 continued, but there are first signs of the soon following reversal of the alliances , a merger of France and Austria on the one hand and Great Britain and Prussia on the other. In India there are already armed conflicts between France and Great Britain in the ongoing Second Carnatic War , and the colonies in America are on the verge of the outbreak of the French and Indian War .

Sigismund III. Christoph von Schrattenbach is elected Prince Archbishop of Salzburg to succeed Andreas Jakob von Dietrichstein , who died on January 5th . The decision will only be made on the 13th election day in the 50th ballot against Joseph Maria von Thun and Hohenstein , the Bishop of Gurk. On May 7th, the new archbishop moved into the city ​​of Salzburg , where he was ordained bishop on December 16th . 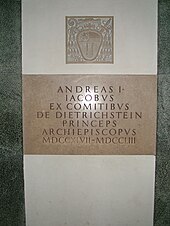 Richmann dies in the presence of his assistant (who survived the incident) when his apparatus is struck by lightning during one of their electrical thunderstorm experiments in Saint Petersburg. The incident caused a sensation in Europe and reinforced the opponents of the lightning rod in their conviction of the dangerousness of the new technology. The picture shows a dramatized representation of this 19th century incident.