Rule of the Gyurme Namgyel

Map of Fürstenberg in the middle of the 18th century: Fürstenberg Castle on the left, Old Distillery and Old Mill on the right

The Gotha Orangery and Friedrichsthal Palace

50 times ducat on the occasion of the election as archbishop

Floor plan of the city of Buxtehude by Nicolaus Rohlfs

Louis Philippe Joseph as a child, around 1750 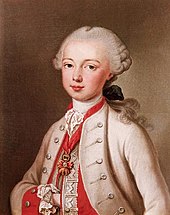 Archduke Leopold as a child