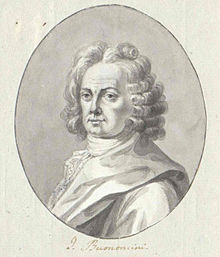 Bononcini was the son of the church musician Giovanni Maria Bononcini from Modena. He received his first artistic training from his father. When he died in 1678, he became a student of Giovanni Paolo Colonna and Giorgio Buoni in Bologna , from whom he received cello lessons. Bononcini was also able to publish his early works in Bologna.

From 1688 Bononcini held the office of church musician in Bologna. There he made the acquaintance of the famous librettist Silvio Stampiglia . In collaboration with Stampiglia, five operas were written between 1692 and 1696, including Il Trionfo di Camilla, regina de 'Volsci , which on December 27, 1696 with the famous Vittoria Tarquini in the title role and the famous castrato Domenico Cecchi “ il Cortona ” on Teatro San Bartolomeo was premiered in Naples and was Bononcini's real breakthrough and arguably greatest success as an opera composer. 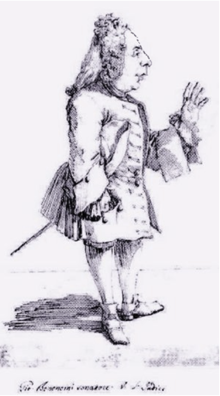 Caricature of the composer by Pier Leone Ghezzi

From 1692 on Bononcini stayed in Rome and in 1696 traveled to Vienna via Venice . There he became a member of the court orchestra of Emperor Leopold I , where he was also successful as a composer. In between, he also stayed in Berlin , where he saw the premiere of his opera Polifemo with great success in the spring of 1702 .

Bononcini was established as a composer by 1706 at the latest. His engagement at the imperial court lasted until 1711. He then went on long study trips, including to Venice and Rome. From there he engaged the Italian Opera House in London in 1720 (together with Georg Friedrich Handel ).

Bononcini's works were on a par with Handel's, and composing between the two musicians turned out to be a competition at times. The concerts, which Bononcini often performed as a soloist with the violoncello, were highly valued by the London aristocracy; the Marlborough family employed him as a house musician for some time.

Between 1720 and 1724 Bononcini was a member of the Royal Academy of Music in London. On May 6, 1727, his opera Astianatte premiered at the King's Theater in London. At the last performance on June 6th 1727 there was a dispute (still known today) between the famous prima donnas Faustina Bordoni and Francesca Cuzzoni .

At the turn of the year 1727/28 there was a scandal in London when Bononcini presented the madrigal In una siepe ombrosa as his own creation. In fact, it came from Antonio Lotti , who published it as part of his Duetti, terzetti e madrigali . From then on, Bononcini, as an "undesirable person", did not receive any more orders and also lost his memberships. Forced by this plagiarism affair , Bononcini went to Paris and composed in 1733 for the “ Concert Spirituel ”. In 1735 he stayed in Lisbon for a year.

In 1737 he lost a lot of money in dubious speculations and temporarily had to earn his living as a copyist . Later he turned to the court in Vienna and from 1741 received a pension from Empress Maria Theresia . His last known composition is the Te Deum from 1741, commissioned by the Empress. Bononcini spent the last years of his life in Vienna, where he died 9 days before he was 77 years old. 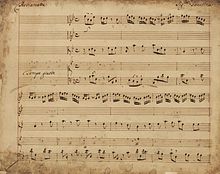