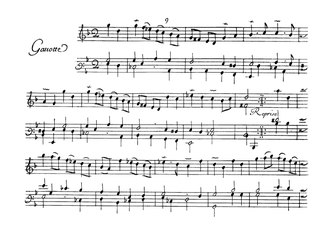 The Gavotte (Italian: Gavotta ; English: Gavot ) is a historical society dance in the straight Allabreve- or 2/2-clock. A half-bar start , often in the form of two quarters, is characteristic. It was often part of the baroque suite .

"... Your affect is really a real exultant joy. Your time measurements are straightforward; but not a four-quarter time; but one that consists of two half blows; whether it can be divided into quarters or even eighths. I wanted to wish that this difference would be taken a little better into account ... "

There are different explanations for the origin of the French word Gavotte : Some experts believe that it comes from the term gavot for the inhabitants of the Pays de Gap in the Dauphiné , mountainous regions near Provence . Another theory is that it comes from the Gaves region , i.e. H. the two rivers Gave de Pau and Gave d'Oloron in southwest France. Still others believe that gavotte means petit galop ("little gallop ").

Typical of the Gavotte are:

“The jumping being is a real property of these gavottes; by no means the current ... "

Georg Friedrich Handel, “A Tempo di Gavotta” from the Sonata op. 1, No. 7.

The gavotte was mentioned by Thoinot Arbeau in his orchésography in 1589: he describes it as the last of a series ( suite ) of Branles doubles; Significantly, he uses the word “Gavotes” only in the plural. It was danced in a row or in a circle "... with small jumps in the manner of the Haut Barrois, ...":

"When the dancers in question have danced a little, one of them comes out (with his lady) and makes some passages in the middle of the dance in front of the others, then he comes to kiss all the other ladies & his lady all the young men, & then they go back to their place, and afterwards the second dancer does the same, & subsequently all the others: But nobody has the privilege to kiss, that belongs only to the boss of the party, and only to those he leads: And finally the lady in question has a cap or a bouquet (= bouquet of flowers, translator's note), and gives it to the dancer who has to pay the musicians and who will be the head of the festival next time ... "

The melody handed down by Thoinot does not begin with a prelude, but is full-time.

Manuscript of the Gavotte from Bach's 5th French Suite

The gavotte became particularly popular from around 1660 at the court of Louis XIV , in the form coined by Jean-Baptiste Lully . He and his successors, such as Michel-Richard Delalande , André Campra , André Cardinal Destouches and Jean-Philippe Rameau, used them extremely often in their ballets and operas. Rameau composed e.g. B. for his tragédie-lyrique Zoroastre (1749/1756) a "Gavotte tendre" (Act I, 3), a "Gavotte en Rondeau I & II" (Act I, 3), a "Gavotte gaye" (Act II, 3), and for the final ballet a “Première Gavotte vive & Gavotte II” (Act V, 8). This example also makes it clear that apart from the various forms discussed above, different characters and tempos were used, as evidenced by the indications “tendre” (tender), “gaye” (happy) and “vive” (lively).

It was not uncommon for the gavotte to be sung on stage, often by a lead singer, and then repeated by the whole choir or by a solo vocal ensemble - all in combination with stage dance. An example in Lully's Atys would be the Gavotte in Act IV, 5, where river gods, deities of springs and streams dance and sing together: La Beauté la plus sévère / prend pitié d'un long tourment / et l'Amant qui persévère / devient un heureux Amant ... (= "Even the strictest beauty has pity on a long torment, and the constant lover becomes a happy lover ...").

Together with the minuet, the gavotte was by far one of the most popular baroque dances, and it is said that they were often coupled with one another in the ballroom. It also found its way into the harpsichord suite as one of the first “additional dances”, or gallanteries . The very first musical examples ever include a gavotte by Jacques Hardel and Nicolas Lebègue in the famous Bauyn manuscript ; Since Louis Couperin (1626–1661), who died prematurely, wrote a double for both , these pieces must have been written before 1661. Hardel's Gavotte was a famous piece that was copied in numerous manuscripts until after 1750, and also existed in versions for other instruments, as a drinking song and a love song; it was also sometimes imitated by other composers, e.g. B. by François Couperin in his Premier Ordre ( Livre premier , 1713).

In harpsichord music since Lebègue ( Livre Premier , 1677), the gavotte, like the minuet, was part of almost every suite (as well as suites for lute or guitar ). In France it was usually at the end of the suite, after the gigue and sometimes after a chaconne, followed only by the final menuet. Examples of this can be found in Lebègue (1677, 1687), Élisabeth Jacquet de la Guerre (1687), d'Anglebert (1689), Louis Marchand (1702, 1703), and Rameau (1706). It was not until François Couperin ( Livre premier , 1713) that the gavotte was found further forward in the sequence, as he added many character pieces, and from 1716 ( Second Livre ) most of the dances disappeared in favor of the character pieces; but even with him there is still the coupling of Gavotte-Menuet. Rameau's aforementioned Gavotte with 6 variations (approx. 1727–1728) also forms the end of a larger suite (in a / A).

In Germany, the Gavotte found its way into their orchestral and piano suites through the generation of the so-called Lullists ( Johann Sigismund Kusser , Georg Muffat , Johann Caspar Ferdinand Fischer and others). Composers in the Italian-friendly south often used the Italian form of the name Gavotta , even if the pieces are stylistically entirely French (Muffat, Aufschnaiter). The sequence in the suite corresponded to the loose and free sequence that was also used in France when putting together dances and orchestral pieces from operas and ballets; Telemann , Handel , JS Bach and their contemporaries liked to use it in this form . Bach normally classified the gavotte in his harpsichord and solo suites and partitas between sarabande and gigue , and in his French and English suites, like other composers of the 18th century, liked to use the combination of gavotte I and II (see above).

From the middle of the 18th century, the gavotte gradually went out of fashion, although it was still regularly used as a stage dance in French opera by composers such as Rameau. Even Wolfgang Amadeus Mozart even composed a Gavotte for the ballet music to his opera Idomeneo , K. 367 (1779). 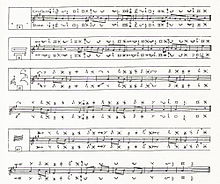 The Gavotte de Vestris is an almost mythical dance in France, which was first performed on January 25, 1785 in André-Ernest-Modeste Grétry Comédie lyrique Panurge dans l'île des lanternes ("Panurge on the island of lanterns") by the famous Dancer Gaëtan Vestris was danced. The brilliant choreography came from Maximilien Gardel and had little to do with the traditional gavotte.

In 1831 the English dancer Théleur translated the Gavotte de Vestris into a shorthand he had invented and thus saved this dance from being completely forgotten. During the 19th century it was introduced at balls and in the repertoire of military music and in France it became the mandatory rehearsal for every prévôt de danse .

Composers of the late 19th and 20th centuries occasionally wrote “gavottes” that had little or nothing to do with baroque dance, especially the polka-like pieces by Johann Strauss Sohn ( Gavotte der Königin , op. 391) and Carl Michael Ziehrer ( Golden Youth, op. 523); but also for Richard Strauss (Suite in B flat major op. 4).

Closer to the character of the baroque or rococo original are the gavotte in Edvard Grieg's Holberg Suite op. 40, or the (sung) gavotte from Ambroise Thomas ' opera Mignon . Even Jules Massenet settled by time and action of his opera Manon to a few bars "Gavotte" in a scene for coloratura soprano inspired, known as "Gavotte of Manon."

Gavotten also exist in Gilbert and Sullivan: In the second act of The Gondoliers and in the finale of Act I of Ruddigore . Sergei Prokofiev uses a “gavotte” instead of a minuet in his Classical Symphony .

The so-called “glow worm idyll” from the opera Lysistrata (1902) by Paul Lincke is also known as Gavotte Pavlova because it was a favorite piece of the famous dancer Anna Pawlowa , who invented her own choreography and danced on her tours.

As a folk dance and folk music genre, the gavotte is still alive today in Brittany , where numerous gavottes ( Gavotte de l'Aven , Dañs Fisel , Gavotte des Montagnes , Kost ar c'hoad ) are an integral part of dance festivals such as the Fest-noz . It has a two-bar structure in common with the baroque gavotte. The rhythm is mostly a syncopated 4/4 time, but 9/8 and 5/8 time should also occur.

The Gavotte des Montagnes and the Dañs Fisel are i. d. Usually performed in a three-part suite in which the first fast part ( tone simpl ) is followed by a slow step dance ( Tamm-kreiz ), which in turn is followed by a fast closing part ( tone doubl ). This has the same rhythm as the tone simpl , but the second part of the two-part melody is here often lengthened by a few characteristic bars.