Postage stamp (1956) for the 10th anniversary of death

Paul Lincke (born November 7, 1866 in Berlin , † September 3, 1946 in Hahnenklee-Bockswiese ; full name Carl Emil Paul Lincke ) was a German composer and theater conductor . He is considered the "father" of Berlin operetta . Its importance for Berlin can be compared to that of Johann Strauss for Vienna and Jacques Offenbach for Paris . Paul Lincke lived in Berlin and at the age of 19 became a theater bandmaster and music publisher . 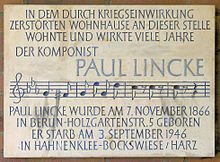 Memorial plaque on the house at Oranienstrasse 64 in Berlin-Kreuzberg

Paul Lincke was born on November 7th, 1866 near the Berlin Jungfernbrücke as the son of the magistrate's clerk August Lincke and his wife Emilie . At that time his father August Lincke played as a violinist in several small orchestras. Son Paul was only five years old when the father died. Mother Emilie and her three children moved to Adalbertstrasse, later to Eisenbahnstrasse, near Lausitzer Platz in Kreuzberg .

Paul's musical inclinations, which were recognizable early on, were particularly evident in his penchant for military music . That is why his mother sent him to an apprenticeship in Wittenberge after finishing secondary school . Here he was trained as a bassoonist by Rudolf Kleinow in the Wittenberg town music band . In addition, he learned to play the tenor horn , the drums , the piano and the violin .

His body measurements did not meet military music requirements in 1884 when he applied for training. Instead, he managed to get his first engagement as a bassoonist at the Central Theater on Alte Jakobstrasse with Adolf Ernst . After only a year he switched to the orchestra of the Ostend Theater on Grosse Frankfurter Strasse. Spontaneously he fell in love with the 16-year-old Soubrette Anna Müller, whom he married in 1893 and from whom he was divorced again in 1898. His former wife later celebrated triumphs with the Berlin audience under the name Anna Müller-Lincke .

Lincke gained valuable experience in entertainment and dance music at the Königsstädtisches Theater , the Belle Alliance Theater and the Parodie Theater in Oranienstraße . He musically accompanied the variety programs and provided his own compositions for popular couplet singers. Venus on Earth , a revue - like one-act act , was created in 1897 in the Apollo Theater on Friedrichstrasse .

For two years Paul Lincke was celebrated at Europe's most famous variety, the Folies Bergère in Paris. He then returned to the Apollo Theater with new compositions. Ms. Luna was premiered in 1899 with great success . In the same year Im Reiche des Indra and in 1902 the operetta Lysistrata followed . Heinz Bolten-Baeckers provided the libretto in both cases .

In 1901 Lincke met a young actress who went by the stage name Ellen Sousa. She played in the Friedrich-Wilhelmstädtisches Theater and inspired Lincke from the very first moment. After she turned down the first invitation, which was an unusual reaction for Lincke, he kept visiting her performances and inviting her again and again until she moved into Lincke's apartment at Oranienstrasse 64 a few weeks after their first meeting . Their relationship was one of deep affection and passion. Lincke couldn't refuse her any wish, so Sousa sang the role of "Frau Luna" in the Apollo Theater.

Enthusiastic reviews and an enthusiastic audience gave Sousa hope for a great career, but Ellen Sousa had to quit her stage work because of a pregnancy: in 1902 she gave birth to Lincke, and the father demanded that Sousa should fulfill her motherly duties and stop working on the stage for this purpose . But this career break lasted only three months.

Lincke's attempts to come to terms with his family situation failed, so he offered Ellen Sousa the marriage and in return demanded that she leave the stage forever. She gave him some time to think it over and tried her new role as a housewife and mother. Paul Lincke experienced another wave of success during this time, as his pieces were in demand again in Paris . He also spent the evenings, if not at the theater, in illustrious groups or in large parties that Sousa could not attend. Lincke now demanded an answer from Sousa and said that if she should decide on the stage, he would no longer see her and their son. He gave her ten days to think about it, during which time he went to a guest performance, and when he returned after six days, Sousa and the child had moved out.

Years later, Ellen Sousa married a wholesale merchant, whom she followed to Dresden and who adopted Lincke's son without objection. This was the final end of the relationship with Ellen Sousa and his son. The waltz “Spurned Love” recalls those events.

The director of the Apollo Theater, Richard Schultz, signed Paul Lincke in 1908 as the first conductor and composer at the Metropol-Theater , whose pompous furnishing revues were among the greatest attractions of the capital.

Paul Lincke and the Nazi regime

In contrast to many biographies before him, Jan Kutscher dealt with this topic for the first time in his Lincke biography in 2016 and also critically questioned other biographical information on this topic: In this way, Kutscher differentiated Fred K. Prieberg's file research , which is based on would appear to be considerably more complex in his view.

Paul Lincke was a member and board member of the Kameradschaft der Deutschen Künstler eV, which was founded in 1933 under the patronage of Joseph Goebbels . From 1933 he was on the honorary board of the New German Theater and Film Club, from 1936 honorary president of the profession of German composers. In 1933 he composed a. a. the march “Our brown boys”, which then belonged to the repertoire of the SS Leibstandarte Adolf Hitler . This was followed by other compositions with similar titles - but in his unmistakable (and with regard to the titles also interchangeable) musical style. He was never a member of the NSDAP.

Even if he in 1937, presented by Minister Goebbels , the Silver Plaque of Honor was awarded his hometown of Berlin and on his 75th birthday on 7 November 1941 by Goebbels in the presence of all councilors, district leader and the Gauleiter of State Artur Görlitzer on behalf of Adolf Hitler , the Goethe Medal for Art and Science was presented, the “highest distinction of German artistic creation” at the time, and the latter also handed over the honorary citizenship of the Reich capital - Goebbels also gave the laudatory speech - Lincke was and remained, according to Kutscher's research, in a certain way too suspicious of the Nazi state in order to want to fully integrate it into their propaganda: On the other hand, examples of music that are still popular (and titles), such as castles that lie in the moon , or Until morning at five, little mouse , those of the (desired) ideology were completely alien to the Nazi state.

At the same time, Lincke had personal, sometimes very close contacts with various prominent National Socialists such as the cultural functionary Hans Hinkel , the so-called “Reich stage designer” Benno von Arent and Magda Goebbels , the wife of the Propaganda Minister. His music experienced a renaissance during the Third Reich, which paid off for him: between 1934 and 1940, his income (roughly) tripled. In the light of this development, the musicologist Albrecht Dümling comes to the conclusion that Lincke profited from the Third Reich.

Since these connections were known to the American and British occupying forces after 1945, they banned Lincke from appearing in their respective occupation zones, which had not been lifted until Lincke's death. Nevertheless, appearances by him, e.g. B. in Arzberg, with whom Lincke kept afloat financially in 1945 and 1946.

In 1943 Lincke made a guest appearance in Marienbad , Bohemia , to conduct his work Frau Luna , the premiere of which in 1899 is considered to be the birth of the Berlin operetta . During his absence, his apartment and his publishing house in Berlin's Oranienstrasse were bombed out.

After the end of the war , Lincke wanted to return to Berlin. For a long time he tried in vain to obtain the Allies ' immigration permit , which at the time was also required as a native of Berlin.

With the help of the American general Pierce, he first moved to Arzberg in Upper Franconia with his housekeeper Johanna Hildebrandt, who had been looking after him for 35 years . There was not the right climate there for Lincke, who was already suffering from health problems, so friends in Lautenthal arranged for a move to Hahnenklee , a climatic health resort near Goslar . Here he died shortly before the age of 80. After the funeral ceremony in the Hahnenklee stave church , he was buried in the Hahnenkleer cemetery, where his grave is still tended to this day.

Wikisource: Radelwadelmadel-Lied , in: The Spree-Amazone , around 1896.  - Sources and full texts