Wittenberge is a city in the Prignitz district in northwest Brandenburg and the most populous place in Prignitz . The city on the Elbe , halfway between the metropolises of Berlin and Hamburg , has existed since the Middle Ages. It developed during industrialization through the Wittenberge train station and the Elbhafen as a technology location , especially with the railway repair and sewing machine factories. With the neighboring Perleberg it forms a middle center . The Elbland Festival takes place here every year .

The stone gate , the oldest building in Wittenberge, was first mentioned in 1297. 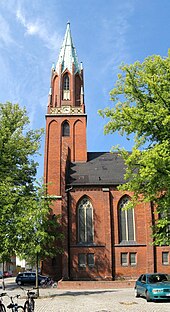 Wittenberge is located in the north-west of Brandenburg in the Prignitz , about eleven kilometers southwest of the district town of Perleberg , on the northern bank of the Elbe , directly at the confluence of the Stepenitz and the Karthane in this river . The city is roughly halfway between Berlin and Hamburg and Rostock and Magdeburg .

Following clockwise are the neighboring communities, starting in the west, Cumlosen , Lanz , Perleberg , Weisen , Breese and Bad Wilsnack on the Brandenburg Elbe side and across the river Seehausen (Altmark) and Aland (Altmark) in Saxony-Anhalt .

A landmark of the city: the clock tower of the sewing machine works in Wittenberge from 1929 (largest free-standing clock tower in Germany and on the European mainland)

In the course of the German settlement after the conquest of the East Elbe territories, which later became the Mark Brandenburg, Wittenberge was founded under the care of the Gans family, as was Perleberg and Putlitz . Wittenberge is said to be in a document in 1226 that was only used as a transsumpt in an original document from Margrave Friedrich the Elder. J. von Brandenburg from February 15, 1463, was first mentioned in a document. In the said document, the Margraves Johann and Otto von Brandenburg decreed that no one was allowed to run a ferry on the Elbe between the town of Werben (Elbe) and “Wittemberge” . In 1910, Hermann Krabbo described the document from 1226 as a forgery, which was confirmed by research in the State Archives of Saxony-Anhalt in January 2006. Another documentary mention can be found on October 29, 1239. At that time, a witness signed a document with "prepositus de uittenberge". It was also Wittemberg documented on July 22, 1300 I as the city Mr. Otto Gans rights Wittenberges confirmed as a city.

At the end of the Thirty Years War Wittenberge was completely depopulated.

The city fell victim to devastating fires in 1686 and 1757 and the Elbe dike breaches in 1709 and 1761. In 1820 the first steamship on the Berlin-Hamburg passenger line docked in the port of Wittenberge. The city's industrial boom was achieved in 1823 by the construction of an oil mill (1823–1935: Herzsche Ölmühle , 1942–1946: Märkische Ölwerke Wittenberge AG , 1946–1990: VEB Märkische Ölwerke Wittenberge , 1990–1991: Märkische Ölwerke GmbH Wittenberge ) by the merchant Salomon Herz established. The completion of the Elbe port in 1835 and the connection to the Berlin-Hamburg railway line on October 15, 1846 as well as the completion of the connecting lines to Magdeburg between 1847 and October 25, 1851, Lüneburg (1874) and Salzwedel (1879) were also decisive for the economic development of the city. The oil mill was followed by a soap factory in 1846, a chemical factory in 1849 and a railway repair shop in 1875, which still exists today.

In 1912, the Gropius construction office was commissioned to take over the project and construction management of a large workers' estate in the north of the city. Around 1914, three types of settlement houses were built in this way, in which Gropius' concept of rationally constructed buildings could be implemented for the first time. The city of Wittenberge failed to place the buildings under monument protection, so that the original condition has been lost through decades of use and private renovations and additions.

As early as 1912, part of the cemetery was set up as a burial place for the city's Jews . The Jewish community founded in 1923, which did not have its own synagogue , buried its deceased members here. During the Nazi era in Germany, the National Socialists cleared the cemetery. Furthermore, founded in 1937 pulp and rayon factory which was located from 1942 on the site of concentration camp Wittenberge the Neuengamme concentration camp . The approximately 3,000 prisoners were obliged to do forced labor under inhumane conditions. Hundreds did not survive because they died of starvation, disease, or were murdered. In 1962 gravestones were restored and erected, as well as a memorial stone.

With the oil mill, Singer and the railway works as well as the construction of other factories such as the North German Machine Factory in 1935 and the cellulose and cellulose factory in 1937/38 , Wittenberge became the most important industrial city in the region. Due to the industrial and thus economic upswing, the population rose quickly. This led to the expansion of the urban area. Especially between the old town and the train station built around 1 km northeast of it, apartments for workers were built in several phases. These include a number of buildings from the Wilhelminian era that are gradually being renovated. The "House of the Four Seasons" with its facade in Art Nouveau deserves special attention .

In the years 1912–1914, the Wittenberg Town Hall (tower height 51 m) was built, which in its monumental design clearly symbolizes the urban aspirations of the up-and-coming industrial city. This awakening was dampened by the consequences of the First World War 1914–1918 and the global economic crisis from the end of the 1920s.

The reunification of Germany in 1990 brought considerable economic changes for the Prignitz and Wittenberge. In addition to the sewing machine factory (1991), the pulp factory (VEB Zellwolle, 1990) and the oil mill (1991) were also closed. Of the large companies, only the Reichsbahnausbesserungswerk Wittenberge (RAW) remained as the current maintenance facility of Deutsche Bahn AG . Due to the associated loss of jobs, there was a considerable emigration of residents (approx. 2% p. A. Since 1990), the end of which has not yet been forecast. The Wittenberge station, which until 2000 was still served every hour by ICE trains on the Hamburg – Berlin route, lost its importance dramatically.

Since the year 2000, the 700th anniversary of the city, Wittenberge has been the annual venue of the nationally known Elbland Festival Wittenberge (EFS), the international festival of operetta and cheerful stage arts in Germany. It is the most important music festival of this musical genre in Germany. Wittenberge is also the venue for the Paul Lincke International Singing Competition for Operetta .

Territory of the respective year

The city council of Wittenberge consists of 28 city councilors and the respective full-time mayor. The local elections on May 26, 2019 resulted in the following composition of the city council:

Hermann was confirmed as a candidate of the SPD on April 10, 2016 without an opponent with 94.8% of the valid votes for a further eight years.

The city's flag is striped red and white (1: 1) and has the city's coat of arms in the center.

There are partnerships with the following cities:

Memorial at the Jahn School 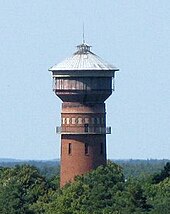 Culinary specialties of the region

The legend of the ferryman Hildebrand belongs to the regionally traditional folk good .

The business location is part of the Prignitz growth core, one of 15 regional growth cores in the state of Brandenburg. This promotes selected future-oriented industries.

In Wittenberge there was the sewing machine factory Wittenberge with 3200 employees in 1989. Although new production facilities were built here in the 1980s, the Treuhandanstalt saw no future for the factory and liquidated it shortly after the fall of the Wall in 1992. The factory went as Branch of the American Singer in operation in 1903, the machines produced were sold under the names Veritas and Naumann . Due to the high reliability of the machines, there is still a market for the machines 20 years after production standstill and good spare parts. In 2012 and 2013 there were commercial settlements such as the Austrian insulation manufacturer Austrotherm , the franking machine manufacturer Francotyp-Postalia or the transformer manufacturer Schacht GmbH .

The further still largest employer is the DB work Wittenberge the German railway , it is responsible for the maintenance of passenger coaches. From 2012 to 2014, the double-decker cars were revised there with the installation of new monitors, LEDs instead of tubes and notebook power connections for local transport in e.g. B. Hessen and Brandenburg. Similarly, there is IC fleet including Deutsche Bahn modernized.

Wittenberge is on federal highway 189 between Perleberg and Stendal . From the B 189, the B 195 branches off to Boizenburg . On the country road L 11 is Bad Wilsnack distance.

The Elbe bridge on the B 189 near Wittenberge is the only road bridge between the bridges of the B 191 near Dömitz (approx. 50 km downstream) and the B 188 near Tangermünde (approx. 60 km upstream). In between, the Elbe can only be crossed with the help of ferries .

The next motorway junctions are Karstädt on the A 14 and Wittstock on the A 19 to Rostock. With the planned closure of the A 14 gap, Wittenberge will have a direct motorway connection.

The Wittenberge train station with extensive other operating facilities is located on the Berlin – Hamburg high-speed line and is the most important station between the two cities. It is also the starting point for the railway lines to Wittstock (Dosse) and Stendal .

Regional express trains on the RE 2 ( Wismar –Schwerin–) Wittenberge – Berlin – Cottbus stop here every hour (between Wittenberge and Wismar every two hours). Once an hour drive a regional train S 1 after Stendal- Wolmirstedt -Magdeburg- (Elbe) and the regional express RE 6 to Perleberg - Pritzwalk - Wittstock (Dosse) - Neuruppin - BerlinGesundbrunnen . The railway line to Arendsee – Salzwedel is now without passenger traffic and has been replaced by the state bus 200 .

Before that, from 1870 onwards, trains on the Wittenberge – Lüneburg line of the Berlin-Hamburg Railway also ran here , which ran at Dömitz across the Elbe and via Dannenberg and Lüneburg to Buchholz. It was originally intended to serve as a direct connection between Berlin and Bremen, but this did not materialize. During the GDR era, Wittenberge station was one of the most important stations in the north-western area of ​​the Deutsche Reichsbahn network and, apart from the Schwanheide and Griebnitzsee and Staaken border stations , was the only stop for interzonal trains between Hamburg and Berlin.

New pier for tankers in Wittenberge

The port of Wittenberge is located at the confluence of the Stepenitz with the Elbe, directly on the south industrial area. Various types of goods can be transshipped at the multi-purpose dock. The port station with four loading tracks enables trimodal handling. An additional jetty for liquid goods enables tankers to be loaded and unloaded directly without intermediate transport. The operator of the inland port is ElbePort Wittenberge GmbH .

In addition to the Marie-Curie-Gymnasium Wittenberge, there is also the Oberschule Wittenberge , the upper school center of the Prignitz district , several elementary and special schools and eight day-care centers run by the city or other operators.

Wittenberge is a popular location for various film productions (historical building fabric backdrops) and the like. a .:

Cities and municipalities in the Prignitz district

Districts and residential areas of the city of Wittenberge