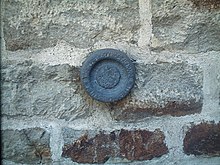 Leveling point at the New St. Alexander Church in Wallenhorst

In practice, the reference area is achieved by defining the height of one or more fixed height points . For example, the point at the New St. Alexander Church in Wallenhorst ( Osnabrück district , Lower Saxony ) served as a reference point for the DHHN85 and DHHN92.

The NHN area corresponds to a quasigeoid that runs through the zero point of the Normaal Amsterdams Peil. Both heights in the German main height network 1992 (DHHN92) and the currently valid heights in the German main height network 2016 (DHHN2016) are labeled "heights above sea level". The NHN therefore only designates the height reference system; for a clear description of a height, the reference frame (the realization of the height reference system through specific measurements in a specific measurement period) must also be specified, e.g. B. for the currently valid heights: "Height above sea level in DHHN2016".

The designation normal zero (NN) was introduced in 1879 when altitude reference levels such as "Hamburger Null", "Höhe above Swinoujscie", "Level zu Neufahrwasser", which had previously been used side by side, were replaced by a uniform altitude reference first for Prussia and soon afterwards for all of Germany. The sea level heights were derived from the level of the Amsterdam water level. The calculation of the first sea level heights (heights in the "old system") was carried out without any seriousness correction. From around 1912 heights were calculated in the so-called "new system" (System 1912), with the actual gravity being approximated by a model, the normal gravity, for the correction due to the earth's gravity field. Such heights are called normal orthometric heights . The heights in the German Main Height Network 1985 (DHHN85) , which was calculated from the remeasurement of heights in the Federal Republic of Germany in the 1980s, were also referred to as heights above sea level. NN heights can therefore refer to different height reference frames, between which a difference of several centimeters must be expected.

NHN heights in the DHHN92

NHN elevation in the Harz on Brockenstrasse

After the reunification of Germany, its leveling networks were reunified relatively quickly. For this purpose, 16 connecting lines between the two power supply units were measured and then all measurements were evaluated together. As a result, the German Main Elevation Network was created in 1992 (DHHN92). Measured gravity values ​​were used to correct the measured values. The surveying authorities of the German federal states decided that the newly calculated heights, like the old NN heights, should refer to the Amsterdam gauge. This means that the German heights have the same reference level as the heights in the United European Leveling Network . For the height definition, the more exact normal heights were selected instead of normal orthometric heights. In order to make the changes visible to the user and to avoid confusion, the designation NHN was introduced, which virtually merges the designations NN and HN.

In Germany, the federal states are responsible for official land surveying . As a result, the new height information is recorded and published inconsistently. In the case of DTK25 maps, normal height zero (NHN) is specified as the height reference, in DTK25-V maps, the scanned topographic maps, height zero (HN) or sea ​​level (NN) is used.

The German Main Elevation Network 2016 (DHHN2016) was decided by the AdV on September 21, 2016 and introduced in all federal states by June 30, 2017. It is part of the Integrated Spatial Reference 2016 . The underlying new measurement of the leveling network of the 1st order between 2006 and 2012 led to deviations from the DHHN92 in the range of a few centimeters. Larger differences in the decimeter range can occur in mining areas. To distinguish between heights of the previous DHHN versions, DHHN2016 heights are referred to as heights above normal height zero (NHN) in DHHN2016 .