This article explains the term sea ​​level in geodesy; for the zero point of a level or a measuring scale, see zero point , for areas see zero level . 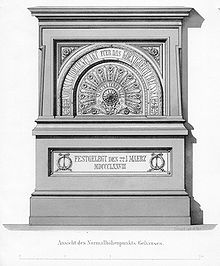 "Normal high point for the Kingdom of Prussia
37 meters above zero.
Fixed March 22, 1878" - Closed flap of the case with feces 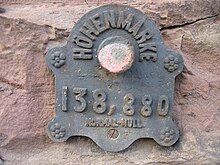 In the past, almost every German station building had a normal zero indicator on the platform side

The normal zero (also normal zero , abbreviated NN or N.N. ) was from 1879 to 1992 the fixed zero level of the official reference altitude in Germany . Colloquially, the now outdated term above sea level and the abbreviation mNN are often used as a synonym for above sea level , wrongly also for areas outside Germany.

Since 1993, the sea  level (NN) has replaced the sea level in the German main altitude network  (DHHN). This change in the height reference area took place in the course of merging the height networks of the old and new federal states ( DHHN92 ) and in connection with the Europe-wide standardization of the height networks ( UELN ).

In geodesy, height is the position specification of the perpendicular distance from a reference surface.

Sea level refers to the height reference area in the German main height network, which runs through the sea level. This is a theoretical point that is exactly 37 m below the normal altitude point in 1879 at the former New Berlin Observatory .

The normal high point in 1879 was replaced in 1912 due to the demolition of the New Berlin Observatory by the normal high point in 1912 near the Müncheberg district of Hoppegarten (40 km east of the city center of Berlin). The heights determined by loop leveling without gravity measurements were also corrected with the normal gravity to normal orthometric heights . The resulting altitude system is called DHHN12 . These values ​​were further identified with the addition  NN (for sea level).

The height reference surface of sea level does not approximate the geoid very well - in the high mountains there can be deviations of several decimeters. In addition, when determining heights, in addition to the small random errors, there are model-related deviations, the theoretical loop termination errors .

In the years 1980 to 1988 the first order leveling network in the Federal Republic of Germany was completely re-measured. The resulting normal orthometric heights are also referred to as heights above sea level.

This height system has only been implemented in a few countries and is being replaced there by the current DHHN92 and  DHHN2016 . Height information in the height reference DHHN92 is marked with the addition NHN (for normal height zero ) to make it easier to differentiate  , with DHHN2016 the expression heights above normal height zero (NHN) is used in DHHN2016 .

Elevation systems in the GDR

In the GDR , sea level was replaced by an altitude reference surface called altitude zero  (HN) since 1956 . For this height system (referred to as  SNN56 ), as in many other countries of the Eastern Bloc , normal heights were used. The approximately 14 cm higher Kronstadt level was used as the date .

In East Berlin , with the height system of the Deutsche Reichsbahn and on the inland waterways , however, NN heights were used unchanged in the GDR.