The title of this article is ambiguous. Further meanings are listed under Müncheberg (disambiguation) .

Müncheberg is a small town east of Berlin in the Märkisch-Oderland district ( Brandenburg ) . The city, founded in the 13th century, is best known for its research institutions in the field of agriculture (in the GDR the AdL , today the ZALF ).

Müncheberg is halfway between Berlin and the German-Polish border on the Oder on the edge of Märkische Schweiz . The proximity to Märkische Schweiz and the towns of Waldsieversdorf and Buckow makes the city with several bathing lakes (including in the districts of Obersdorf and Münchehofe) a popular destination for holidaymakers and day-trippers. To the northwest of Münchehofe and Hermersdorf, the Stobbertal nature reserve closes off the urban area.

According to the main statute, the city of Müncheberg is divided into the following districts:

Berliner Tor in the city wall

Church in the Münchehofe district

In the late summer of 1225, the Cistercian monks of the Leubus monastery near Breslau and the Cistercian women of the Trebnitz monastery received 200 hoofs of land from the Silesian Piast prince Heinrich the Bearded to found a market town. After the nuns waived their claims, the monks from Leubus built the settlement on a plateau surrounded by swamps and lakes, which they initially named Lubes based on its origins . The place was mentioned for the first time on June 29, 1232 in a document from Heinrich the Bearded, which granted the residents additional lands and privileges. In the confirmation of donation from Pope Gregorius on February 11, 1233, the place was given its current name Müncheberg (spelling at the time: Municheberg). In 1245 Duke Boleslav gave the place market rights. Beginning in 1319, a seven meter high city wall with two city gates, the Küstriner Tor (called Storchenturm) and the Berliner Tor (Powder Tower), was built to protect the city. In the course of the 14th and 15th centuries, the young city was able to expand its position as an important market town and expand its territory. In 1318 the city acquired the Cöpernitz forest, in 1352 the village of Hoppegarten came to Müncheberg, in 1410 the village of Maxsee and in 1493 the village of Schlagenthin. In 1355 the parish church and the hospitals were first mentioned. The relocation of the country roads via Quilitz and Seelow and Liebenberg to Müncheberg in 1348 and 1362 brought two customs offices to Müncheberg.

In April 1432, Trebnitz was completely destroyed by the Hussites , and on April 17, 1432, Müncheberg fell largely to rubble after the Hussites had destroyed the Küstriner Gate and plundered the church. From 1472 to 1639 Müncheberg was owned by the von Pfuel family, who lived in Jahnsfelde . The Thirty Years War and the plague left their mark in the 17th century . In addition, the city burned several times. The worst town fire in 1641 left only the church and a few surrounding houses. As a result, the number of inhabitants fell from around 1,300 in 1624 to less than 400 in 1655. In the late 17th century, however, conditions in the city improved again quickly. In 1689 the first post office was set up, which soon became an important station on the regular mail route from Berlin to Frankfurt (Oder) . In 1692 the rebuilt town hall was completed.

From 1699, French families who had left their homeland for reasons of faith were settled in Müncheberg. The French colony grew to 40 families, from 1701 French MPs were in the city's magistrate, in 1710 the French church was built on the site of the old Heilig-Geist-Hospital. The French colony lasted until the Napoleonic Wars of the early 19th century. The Französische Straße in the old town still bears witness to this time.

The expansion of the Kunststraßen in the first third of the 19th century ( Reichsstraße 1 ) made the city a center of goods traffic to the east. In 1818 the post station in Müncheberg was one of the largest post stations in Prussia.

Today's district of Dahmsdorf emerged from the "Villa Thomae" after Archbishop Rudolf von Magdeburg left it with 50 hooves to the Cistercians of the Silesian monastery Leubus (today Lubiąż). In the period that followed, up to the 15th century, the place had its name changed several times (Domestorp, Domasdorf, Tomasdorff, Tomestorf, Damesdorp, Damestorff and Domestorff). The Cistercians sold the village together with Buckow at the beginning of the 15th century. After that, it always had the same owners as this one. In 1560 Wolf von Kloster was enfeoffed with the village by Elector Joachim II. In the 17th century the village belonged to the von Pfuel family , and from around 1685 to the Counts of Flemming.

129 Münchebergers paid for the First World War with their lives. From the Second World War testify war cemeteries on the Müncheberger cemeteries and a Soviet war cemetery with the memorial on the B 168 (Karl-Marx-Straße). 239 Soviet soldiers are buried on the terraced complex built in the late 1970s. During the advance of the Red Army against Berlin, a large part of the city's historic building fabric was destroyed.

During the Nazi era , the New Synagogue at Hinterstrasse 155 , built in 1856, was desecrated and destroyed by SA men . A memorial plaque in Rathausstrasse 2 has been commemorating the Jewish community and its church since 1995. In the forest between the Hermersdorf and Wulkow district and between Wulkow and Neuhardenberg , two satellite camps of the Theresienstadt concentration camp were built during the Second World War . Since 1995 a memorial stone in the main street of Hermersdorf and a memorial plaque on the school camp next to the church have been commemorating the dead in these subcamps.

After the Second World War, the old town, which had been destroyed by the war, was largely rebuilt. After the reunification of Germany , the remaining monuments, in particular the town church of St. Mary, were restored and given a new use.

During the Cold War, Müncheberg had the joint command post of radio battalion 61 and Jagdgeschwader 8 of the NVA LSK / LV . From 1978 to 1981, a two-story monolithic protective structure of a higher protection class was built for around 28 million GDR marks , which was a special feature of this command post. The bunker was taken out of military use in 2004.

On January 2nd, 1992, the Center for Agricultural Landscape and Land Use Research (ZALF) e. V. founded, today's Leibniz Center for Agricultural Landscape Research (ZALF) e. V. This institution, financed jointly by the federal government and the state of Brandenburg, is the city's largest employer. The ZALF also houses the German Entomological Institute , which has one of the largest and most important insect collections (approx. 3,000,000 specimens) in Germany.

On July 13, 1992, the Minister of the Interior of the State of Brandenburg approved the establishment of the Müncheberg Office. July 16, 1992 was set as the date on which the office was established. The office was based in the city of Müncheberg and consisted of six communities in the former Seelow and Strausberg districts :

Church in the Trebnitz district

The city council of Müncheberg consists of 18 city councilors and the full-time mayor. After the local elections from 2003 to 2019, the following allocation of seats resulted:

The city council of Müncheberg elected the former director Klaus Zehm on April 10, 2003 as full-time mayor. He was replaced by Uta Barkusky, who won the mayoral election on October 12, 2008 with 68.4% of the valid votes. Barkusky was confirmed in office on September 25, 2016 in the first ballot with 60.0% of the valid votes for a further eight years.

The newly founded city took over the coat of arms of the dissolved Müncheberg office on March 6, 2004.

Blazon : “Square of red (fields 1 and 4) and gold (fields 2 and 3); at the top in front a silver six-spoke wagon wheel; at the top in the back a green fir tree, in front at the bottom on a green three-mountain a growing monk with a silver robe and black scapular, who holds a silver shield with a red gold-armored eagle in his right hand and a silver star-studded staff in his left hand (city arms before 2002), silver-colored lower back jointed masonry. "

The city of Müncheberg flies a flag. The flag is quartered in yellow and red with the city arms in the middle. 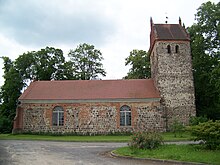 The Müncheberg , Obersdorf and Trebnitz stations on the Berlin – Küstrin-Kietz border line ( regional line RB 26 Berlin-Ostkreuz - Kostrzyn ) have been served by the Niederbarnimer Railway since 2006 . The Buckower Kleinbahn , operated as a museum railway, branches off from this route in Müncheberg .

In the district of Eggersdorf is the same airfield in the grounds, a production of UL aircraft is located.

Personalities at the Müncheberg research institutes