The title of this article is ambiguous. Further meanings are listed under Märkische Schweiz (definition of terms ) . 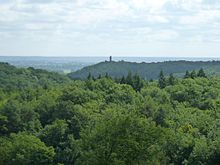 The Märkische Switzerland is a hilly landscape in the district Oderland in the state of Brandenburg in ( Germany ). 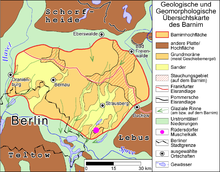 The compression areas shown here on the Hohen Barnim form the Märkische Schweiz.

The highest elevation of the hilly and wooded area is the Semmelberg ( 158  m above sea  level ) near Bad Freienwalde (Oder) . For Brandenburg conditions, the compression areas there are extremely rich in relics. With differences in altitude of well over 100 meters over a horizontal distance of less than 1 km, the area immediately south of Bad Freienwalde is the region with the greatest relief in Brandenburg. The formation of dry valleys at the end of the Vistula Ice Age strengthened the relief there .

Historically, the northern springs of Märkische Schweiz are mentioned as early as the 17th century under the Great Elector , who, because of their great healing powers, ushered in the beginning of the bathing era in Bad Freienwalde (Oder) , then still Freienwalde. Even today, this can be clearly seen from the resort architecture .

Since the 1920s, Bad Freienwalde (Oder) has become a popular winter sports destination for Berliners.

The central flowing water in the south of Märkische Schweiz is the Stobber . The stream rises on the North Sea-Baltic Sea watershed , so that it has two directions of flow and mouths. Its apex area with the pseudobifurcation is 48  m above sea level. NN in the Rotes Luch moorland . The shorter south-western part joins after about 6 kilometers between the Maxsee and the Liebenberger See with the Mühlenfließ coming from the Maxsee to the Löcknitz , which drains over the Flakensee and Dämeritzsee into the Spree and thus over the Havel and Elbe into the North Sea. This shorter part of the Stobber is mostly called Stobberbach or Stöbberbach to distinguish it; until the 19th century this watercourse was called Köpernitz . The 25 km long north-eastern main part flows from the Roten Luch through Buckow to the Oderbruch . At Altfriedland it unites with the Quappendorfer Canal to form the Friedländer Strom , whose water is fed to the Baltic Sea via the Alte Oder , the Hohensaaten-Friedrichsthaler Wasserstraße and the Oder in the Stettiner Haff . The Alte Oder is also the river that delimits Märkische Schweiz in the east and north. The numerous clear brooks of the Hohen Barnim , which arise in the central and northern areas of the Märkische Schweiz , flow into it .

The city of Buckow , a Kneipp spa town , located centrally within the nature park, is traditionally the tourist center in the south of Märkische Schweiz . In the north it is the town of Bad Freienwalde (Oder) , at the same time the oldest health resort in the Mark Brandenburg and moor spa .

Today the northernmost training location of the German Ski Association is in Märkische Schweiz . The longest natural toboggan run in the North German lowlands is also located along the dry valleys . Over a length of 870 m, about 80  meters of altitude are overcome.

Theodor Fontane described the region in the walks through the Mark Brandenburg as follows:

“But where is the real Märkische Schweiz located? We will have to put up with a dualism , as well as otherwise. Freienwalde is a lady after all, Buckow is a rural beauty who steps into the lake with bare feet and braids her hair under willow branches. Now everyone choose according to their sense "

- The Oderbruch and its surroundings, 1892 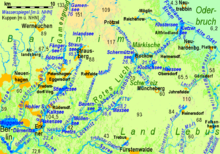 Märkische Schweiz between Berlin and Oderbruch

The Great Brockhaus in its edition from 1929 (15th edition) illustrates the location of Märkische Schweiz with its maps (see illustration).