Oderbruch in the Oder lowlands,
bluish-green = below 20 m above sea level,
Or in the entire section of the German-Polish border
Ho-Fri-Wa = Hohensaaten-Friedrichsthaler waterway

The Oderbruch (composition with the word Bruch for "wetland"; Polish Kotlina Freienwaldzka ) is a former inland delta of the Oder in the Märkisch-Oderland district of Brandenburg and in the West Pomeranian and Lebus voivodeships in Poland .

The Oderbruch is an area through which the Oder flows, almost 60 km long and 12 to 20 km wide, which lies significantly deeper than its surroundings and extends roughly between the towns of Oderberg in the north-west and Lebus in the south-east. In the west, the Oderbruch is bounded by the plateaus of Barnim and the country of Lebus , on whose hillside the towns of Wriezen and Seelow are located. The eastern boundary is formed by the Neumärk hill country and the Warta lowland. The Warta flows as its largest tributary of the Oder ten kilometers after she entered the Oderbruch. The part of the Oderbruch west of the Oder, about 5/6 of its area, has been a river polder since the middle of the 18th century , while the original wetland has been preserved on 1/6 of the area on the east bank, now in Poland . The bottom of the Oderbruch forms a very gently sloping plain and drops from 14 m in the southeast near Reitwein to one meter sea level in the northwest near Hohensaaten . The low lying only 2-6 km wide part west of the Neuenhagener spur is called Niederes Oderbruch . Excluding the Neuenhagener Insel , the Oderbruch has a total area of ​​920 km².

Quiet or south of the Neuenhagener Insel

In the Oderbruch, the Oder lowlands are part of the Thorn-Eberswalder glacial valley that was formed during the Vistula Ice Age . Until the 18th century, the Oder meandered in several arms through this lowland, which was flooded to a large extent several times a year, whereby the course and importance of the Oder arms also changed. In the first half of the 18th century, the main stream of the Oder flowed to Güstebiese (today Gozdowice ) on the eastern edge of the lowland, from there westwards towards Wriezen , from there along Freienwalde and westwards around the moraine ridge of the Neuenhagener spur towards the Oderberg and then eastwards to Hohensaaten , where you will find today's bed. The run shown from Güstebiese is now called Alte Oder . The most important left tributary, today also "Alte Oder", branched off at the Reitweiner Sporn north of Lebus in the direction of Seelow and flowed on the western edge of the lowland northwest to Wriezen. The lower part of this arm of the Oder is now called Friedländer Strom and flowed into what was then the main stream at Wriezen. An old right branch flowed on the northeast edge of the lowland. Partly it has risen in today's main stream. The lowest (westernmost) piece has been preserved as a silent Oder . An important line of business in the places on the edge and the few places in the Oderbruch at that time was fishing.

Today's landscape of the Oderbruch was shaped by the straightening of the Oder in the 18th century. The dike and drainage of the wetland began after 1735, mainly between 1747 and 1762 under the Prussian King Friedrich II. In his honor there is a monument in Letschin as thanks for the draining of the Oderbruch.

According to the plans of the hydraulic engineer and chief dike inspector Simon Leonhard von Haerlem , which were confirmed by the Swiss mathematician Leonhard Euler , the course of the Oder was led along the eastern edge of the lowland along the Oderbruch. For this purpose, an 18.83 km long, largely straight canal bordered with dykes was built, which shortened the course of the river by around 25 km. At Hohenwutzen , the moraine ridge of the Neuenhagener spur was pierced at a suitable point to shorten the course of the Oder, making it the Neuenhagener Oderinsel . A system of drainage ditches ensured that the wetland was drained. On July 2, 1753, the dam at Güstebiese was pierced and the new course of the Oder was flooded. Since then, the Oder has been routed past the eastern edge of the Oder lowlands on the Oderbruch, while the water from the amelioration area collects in the Old Oder . As planned, after a short time large areas were dry and could be settled, around 130,000  acres (32,500 ha) of fertile arable land had been gained.

The planned settlement began in 1753 in newly laid out street villages . The first place in the course of settlement is Neulietzegöricke , a district of the Neulewin municipality since 2001 and a listed building as a village. Many places that arose in connection with the settlement can be recognized by their names beginning with New .... The new settlers were specifically recruited outside Prussia with discounts; they came from Hesse-Darmstadt , Mecklenburg , Pfalz-Zweibrücken , Saxony and Württemberg , but also from Lower Austria and the Swiss canton of Neuchâtel, which was then ruled in personal union with Prussia . In addition, there were also numerous settlers from the surrounding area of Neumark , who used the now dry areas for direct colonization from the adjacent heights. The place names Beauregard and Vevais still remember the francophone settlers, who mostly came from French-speaking Neuchâtel . The Vorwerk Croustillier (originally La Crustille) is just a Francophile modification of Ranft (the Ränftchen). 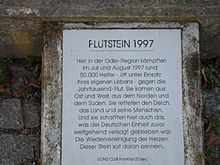 Towards the end of the Second World War , the entire Oderbruch was badly affected in the Battle of Berlin in the spring of 1945 . Numerous villages lay in ruins.

The greatest flood catastrophe of the 20th century in the Oderbruch occurred in the spring of 1947. On the night of March 22nd, drift ice formed an ice barrier near the flood canal near Küstrin-Kietz as a result of ice drift . Within a short time it dammed up large amounts of water, which flooded the Oder dike north of Reitwein in two places over a length of over 100 m. The flood even reached Bad Freienwalde (Oder), several kilometers away from the river . More than 20,000 people were left homeless at the time.

In addition to the critical Johanni - floods in 1997 , there was another extreme flood in winter 1981/82 with the dangerous for the dike or ice conditions.

View from Neuenhagener Insel to the south over the Oderbruch

For the construction of the dyke and its maintenance, the agricultural director Martin Friedrich Creutz drafted a dyke regulation, which was issued by the king on June 23, 1717 as a pond and bank regulation for the Lebusian lowlands on the Oder. It united the residents of the Oberoderbruch to form a dike association . Today the Oderbruch Waters and Dike Association takes on this task.

Around 1895 a pumping station was built near Neutornow and one near Liepe in order to drain the area northeast of Wriezen more safely and to be able to use the Niederoderbruch west of the Neuenhagener Oderinsel more agriculturally. In the pumped area, the water level - including the groundwater surface - is sometimes only 0.5 m above sea level.

In order to improve the flow of the Old Oder, the Hohensaaten-Friedrichsthaler Wasserstraße (HFW) was created in 1906–1926 , a canal (artificial Oder arm) on the western edge of the Oder lowlands downstream of the Oderbruch, the water level of which at the upper end in Hohensaaten is 0.4 m above NN is almost 3 m below the mean water level of the Oder (3.2 m above NN), which flows in that section on the eastern edge of the lowland and has a significantly greater gradient. The lower part of the Alte Oder located north of the Neuenhagener Oderinsel, upstream of the HFW, is now called the Oder reserve . Their mean water level is currently. at 1.2 m above sea level.

The beaver was considered extinct until well into the middle of the 20th century. In 1986, 46 copies were fetched from the Elbe and settled in the Oderbruch. Now the population has recovered splendidly and is forming a stable population. A study from 2008 counted around 60 settlements with around 250 specimens in the Oderbruch north of Frankfurt. The total number of animals in the study is estimated to be well below 500 animals in the entire Oderbruch. For several years now, however, the animals have left unmistakable traces: felled or gnawed trees , water dammed up by dams wet fields, beaver burrows undermine fields or dikes. The activity of beavers on the Oder dykes becomes even more critical when, as with Güstebieser Loose, they destroy the sward in the dike with their beaver shells and create deep holes.

In order to counter the potential for conflict, the Oderbruch Waters and Dike Association has been using beaver management since 2009 to ensure a more relaxed relationship between the inhabitants of the Oderbruch and large rodents.

Places in the Oderbruch and on its edges

West of the Oder: 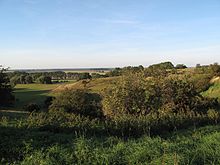 East bank of the Oder:

Theater on the edge 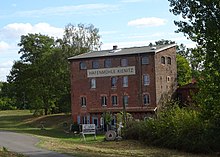 In addition to the sparsely populated landscape, which is suitable for cycling and hiking, the Oderbruch offers the following sights:

The spring with the partially flooded polders and cold winters with the frozen Oder and the times of bird migration are particularly interesting. Alone at Lake Kietzer See , the central body of water of the European bird sanctuary Altfriedland pond and lake area , up to 30,000 migrating gray geese and white-fronted geese rest in autumn .

The former railway line ( Oderbruchbahn-Radweg ) from Wriezen to Neurüdnitz has been paved as a cycle path for cyclists . The paths parallel to the Oder dike are also very popular with cyclists. The Oder-Neisse cycle path runs along the Oder dike - now one of the most popular in Germany.

Agriculture characterizes the Oderbruch. In addition, tourism and the generation of renewable energies play a certain role.

The Oderbruch achieved widespread fame within Germany from the 19th century onwards for its sugar production , which is inextricably linked with experts such as Johann Gottlieb Koppe .