This article describes the meaning in soil science and agriculture, for the term of the same name from linguistics, see Melioration (linguistics) .

Melioration , sometimes also meliorization ( Latin melior , 'better' ), is a term used in soil science , landscape management and water management that is used in different ways within the German-speaking countries. 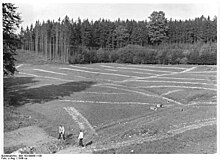 In Germany, this includes cultural-technical measures to increase the value of the soil , i.e.

Such measures are, for example, irrigation or drainage , drainage , embankment of floodplain areas and the reclamation of wasteland .

Partly the cultivation of moors and heather also counts , the torrent control , the improvement of the soil structure and nutrient status (loosening of compacted soil layers, increasing the pH value , pitting etc.), but nowadays more attention is paid not to destroy any more wetlands (see extinction of species ) and avoid conflicts of interest between agriculture and nature conservation .

The term melioration is used equally in agriculture and forestry as well as in soil science and water management . It is derived from the Latin meliorare (to improve), so the colloquial term soil improvement is largely synonymous.

In contrast to Germany, in Austria amelioration is primarily understood to mean measures for land regulation - i.e. a change in the property boundaries in order to achieve better access, protection of the landscape and a better road network . The goal is less to improve the fertility of the fields than to improve their structure. In Germany these measures are referred to as land consolidation or land consolidation .

These measures - which farmers often still call "commassing" ( merging ) after the earlier designation - consist primarily of merging plots that are too small or their better shaping. The direction of the driveways or embankments is also optimized in order to achieve economical management and less soil erosion . Often a point in time is chosen for a complete "reallocation" of the parcel stock at which the cadastre has to be re- measured anyway .

The extensive restriction to land management measures is related to the current situation in agriculture :

Objectives of the agricultural authorities

In Lower Austria, the Lower Austrian agricultural district authority does not only cooperate with the municipalities in commissioning procedures as it used to . In addition to improving the developability of agricultural land, certain areas (e.g. on small bodies of water or for embankments that were previously fallow) should be reclassified . This is how a biotope network system is to be created in the long term .

With the amalgamation one achieves a better manageability of the real estate , which used to be severely fragmented by the division of inheritance (the narrow areas, which have arisen over time through the division of land , are also called belt fields, belt parcels or Lissen). This makes it possible to bring biologically important landscape elements such as hedges , groups of trees, wet areas , etc. back into agriculture.

This task, which is equally important for alpine terrain, settlements and tourism, is not subordinate to the agricultural authorities in Austria (and similarly in Switzerland ), but rather to their own regional geotechnical departments.

In Switzerland, all soil improvement measures were originally called melioration. The term experienced an expansion in the 20th century. Since then, it has also included measures such as the consolidation of goods and erosion protection. The term is now used synonymously with the comprehensive restructuring of rural areas.

These are measures to increase the value of the soil , so

Cultural measures include, for example, irrigation or drainage, the embankment of floodplain areas and the reclamation of wasteland .

Conflicts of interest between agriculture and nature conservation should be avoided as far as possible (agricultural clause, nature conservation law of the federal government or the federal states ). Melioration projects should only take place if an overall ecological report is available. The (short-term) benefits are to be compared with (long-term) economic costs and ecological damage ( environmental impact assessment ).