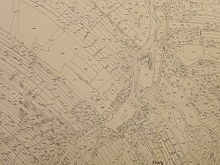 A cadastre is generally understood to be a register , list or collection of things or facts with a spatial reference. In a narrower sense, the (southern German also: the) cadastre, more precisely the real estate cadastre , stands for the nationwide register of all parcels ( parcels , land and land rights ) and their description. In a descriptive part ( land register / real estate book ) and in maps ( land map / real estate map ) the parcels are described with their spatial location, type of use and size as well as the buildings on the parcels. Land parcels and buildings are defined as real estate in the state laws in Germany. 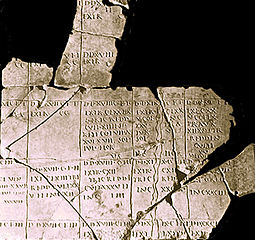 Cadastre came into German via the French word cadastre and, in etymological terms, is traced back to the Greek word κατάστιχον ( katástichon "list, register, business book"). The word was taken over on the medieval Latin legal term catastrum , this in turn on a Latin word capitastrum "poll tax directory". The catasta ( Latin for “pile, push, quantity” ) was used for a display frame for the exhibition of slaves for sale, i.e. a list of the slaves on offer.

After the French Revolution , for the purpose of introducing a property tax, a register was drawn up showing the exact area of ​​the property. Previously, the state had failed with an estimation system or declaration system with regard to the recording of the property areas - as well as due to the owners' “willingness to reduce taxes”. From 1798 onwards, all areas, including those previously belonging to the church and the nobility, were measured and recorded in a register for the first time.

In 1808 Napoleon ordered a general parcel survey for the areas on the left bank of the Rhine in order to set up a land tax cadastre. The Kingdom of Prussia followed this procedure in 1819 with an instruction regulating this. Around 1822 to 1835, the entire western provinces were measured according to the boundary markings made by the property owners and systematically recorded in the Rhenish-Westphalian original cadastre . In the eastern provinces dominated by the nobility, the nationwide surveying and recording could only be enforced from May 21, 1861 with a law ordering this.

The cadastre is said in Austria , Switzerland and parts of southern Germany . Surveying office is common throughout the German-speaking area, cadastral office mainly in the north. Any other systematic recording and listing of similar objects can be referred to as a cadastre, such as a tree cadastre , wine cadastre , contaminated site cadastre or hunting cadastre . As with the (real estate) cadastre, there is usually a graphic part ( plan ) and a directory ( register ) - the latter is usually kept as a database in the form of a geographic information system. 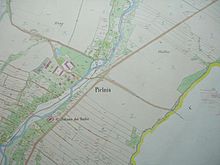 These are the main components of the cadastre

The cadastral map series consists mainly of the cadastral map and, if there are agriculturally usable areas, the appraisal map of the official soil appraisal . Here at least the spatial location, shape and delimitation of the parcels, the parcel numbers, the buildings, the types of use, the corridor or district boundaries and street names are shown. Often more information, such as topography, are bathes names and survey points shown.

The cadastral figures include the surveying plans, the coordinates and coordinate calculations of all surveying, boundary, building and topographical points documented in the cadastre as well as evidence of the area determination . Due to the chronological update of the cadastre, which has to be kept permanently, border and surveying points can be visited locally if necessary and missing markings or safeguards restored. The connection of two boundary points forms a parcel boundary .

Other descriptive information is , for example, the recognition of the property boundaries by the owner (boundary negotiation, boundary record) after previous continuation (division or boundary restoration).

The books and maps of the real estate cadastre are seen as an integral part of a land or geographic information system (GIS). It provides official geospatial base data.

Continuation means updating the information in the real estate cadastre. As a rule, a continuation is carried out on the basis of the results of a local cadastral survey. This includes measurements for the subdivision of parcels (colloquially also called division measurements), boundary determinations and restoration and building measurements , as well as the updating of the cadastre according to a land management procedure (for example land consolidation procedure , building land reallocation procedure ).

Continuation is also possible without a local survey. This includes the separation (division of a parcel based on calculations), the merging of two or more parcels to form a new booking unit with a new parcel number, as well as the correction of the area information after a recalculation or evidence of the actual local type of use.

Continuation measurements may only be carried out by the institutions designated for this purpose (surveying offices) according to the respective state law. These are mainly the locally responsible land registry or surveying office and the publicly appointed surveyors . For this purpose, there are different regulations in the federal states, which in some cases also authorize city surveying offices or other authorities to carry out continued surveys, provided that they have surveying specialists; There are no publicly appointed surveyors in the state of Bavaria.

Use and publicity of the cadastre

The real estate cadastre can be viewed by anyone who demonstrates a legitimate interest. Citizens can mainly use information from the official property card ( land register excerpt, e.g. for planning applications) or from the automated property register (ALB excerpt). Traditionally, fees are charged for all uses of the cadastre. In August 2019, the Saxon Ministry of the Interior announced that it would make the data in the property register available free of charge and commercially usable.

Other bodies (e.g. publicly appointed surveyors and civil engineers authorized to do so ) can also receive excerpts from the cadastral figures. For example, to prepare an official site plan that is used for a plot of land or a building application.

Surveys for the cadastre

Cadastral surveys in German-speaking countries may only be carried out by public authorities and publicly appointed surveyors (in Germany ÖbVI , in Austria by civil surveyors ). They charge fees for this, the amount of which is specified in the respective fee schedule.

Property measurements are required, for example, for:

History of the cadastre

Shown on the territory of Prussia :

The real estate cadastre is the official register of parcels within the meaning of Section 2 Paragraph 2 Land Register Regulations (GBO).

It should be noted that in particular the size, the recorded use (economic type) and the buildings shown do not participate in public belief. This means that the area size entered in the cadastre or land register does not give rise to any claim that the parcel actually has this size. However, good faith in the correctness of an incorrectly drawn parcel boundary indicated on the land map is protected.

The cadastre is managed by the responsible cadastral or surveying office . The cadastre represents the official register within the meaning of Section 2, Paragraph 2 (GBO). It thus serves to secure property .

A first attempt to record the properties in Austria was made under Maria Theresia (1740–1780). With the patent dated September 5, 1747, it decreed the regulation and recording of manorial or Dominical property and rural or rustic property . The files on this regulation formed the cadastre. Emperor Josef II. 1785–1789 ordered the creation of the Josefin cadastre in all hereditary countries on July 27, 1784 . With this cadastral system, the oldest determination and marking of the municipal boundaries and the keeping of the field or vineyard names were given. However, this cadastre aroused strong resistance and had to be repealed in 1790 under Leopold II . It remained the provisional basis for collecting property tax until the next cadastre was introduced . The first complete cadastre was created on the basis of the property tax patent dated December 23, 1817 by Emperor Franz I : the Franziszeische Cadastre . Its original name was real estate tax cadastre , as it was the main basis of real estate tax assessment. However, he contributed to the establishment of the land registers in Austria and the successor states of the Austro-Hungarian monarchy .

The boundary cadastre was introduced with the Surveying Act of 1969 . The property database has been created through digitization since 1975 , and the digital cadastral map (DKM) has been in operation since 1989 .

In Switzerland, the designation land register is common for the cadastre in civil law . The cantons usually keep cadastres for tax purposes with property appraisals.

In France there are two types of cadastre: Alsace-Moselle ( Alsace-Lorraine ), and France de l'intérieur (dt. "Inner France"). When the province of Savoy belonged to the Kingdom of Sardinia , there was a cadastre from 1730, which was replaced by the Napoleonic cadastre from 1848 after the final annexation to France (1860).

The biggest difference is historical. According to the Napoleonic cadastre (until 1813), the map series was not continued. After 1871, the realm of Alsace-Lorraine experienced an adjustment of the cadastre according to Prussian style. A land register ( livre foncier ), the marking of land ( abornage ), survey records ( fichiers cadastraux ), property book ( Matrice de rôle ) are from this time the area of ​​the Alsace ( Départements Bas-Rhin , Haut-Rhin ) and parts of Lorraine ( Département Moselle ) own.

There is no public belief in the land register. In all of France, the state does not guarantee property. The protection of the owners takes place in the interior of France via notarial contracts.

Another special feature is the publication of the cadastral documents without the legitimate interest existing in other countries.

In Brazil there are different conditions for rural and urban areas. For rural properties there has been a law since 2001 that converts the previously existing tax cadastre into a property cadastre and at the same time prescribes the definition of boundaries using uniform national coordinates ( coordinate cadastre ). In the cities, the cadastre is only used for tax purposes. The land register, which only exists for part of the private real estate due to the lack of a land register obligation, does not enjoy public faith , but only the presumption of correctness applies . In possession taken land can usually after five years by registration in the land register transferred to the legal property be.