Rhine Prussia is a redirect to this article. Further meanings are listed under Rhine Prussia (disambiguation) .

The Rhine Province (Rhineland, Rhenish Prussia, the Rhineland ) was one of the Prussian provinces that formed the Prussian state from June 22, 1822 until it was dissolved after the Second World War . It covered the Rhineland from Saarbrücken to Kleve . The seat of the President and the other state administrative authorities for the province was Koblenz . The legislative and administrative headquarters for the provincial federation of the Rhine Province , a self-governing body for over municipal duties with the main organs governor and county council , was Dusseldorf . The northern part of this province is now in the state of North Rhine-Westphalia , the southern part in Rhineland-Palatinate and Saarland . Smaller parts today belong to Hesse (former Wetzlar district ) and Belgium (former Eupen and Malmedy districts ).

Before 1792, the later area of ​​the Rhine Province was divided into four imperial districts , the Burgundian , Kurrheinische , Niederrheinisch-Westfälische and Upper Rhine districts, with over 50 territories that belonged to about as many sovereigns . In the Duchy of Kleve , parts of the Duchy of Geldern and in the Principality of Moers , this was the King of Prussia . In addition, there were around 30 lordships that were not included in a district association and were designated as imperial directors , as well as the imperial knighthood in two cantons of the Rhenish knightly circle with 75 owners of lordships or closed estates.

In the course of the Wars of Liberation , the areas along the Rhine came under Prussian administration and were fundamentally reorganized. The temporarily created General Governments of Middle Rhine , Lower Rhine and Berg formed the basis for the Rhine Province .

The Prussian King Friedrich Wilhelm III welcomed his new subjects . in a proclamation on April 5, 1815:

"I step among you with confidence, give yourselves back to your German fatherland, an old German prince tribe, and call you Prussia."

Meanwhile, the inhabitants of the Rhine Province often felt that they were Must Prussians . In particular, many feared the loss of “ Rhenish law ”, which manifested itself in the Cologne-Düsseldorf fraternization festival of 1843. Since the Rhenish bourgeoisie valued many of the achievements of the French Revolution , the Rhine Province was a stronghold of anti-Russian particularism and the democratic movement , especially the idea of popular sovereignty in the German Revolution of 1848/1849 .

The assignment of the Rhineland to Prussia was sealed under international law with the signing of the Vienna Congress Act on June 9, 1815. The historian Thomas Nipperdey assessed this as fundamental to the history of Germany :

“The relocation of Prussia to the Rhine is one of the fundamental facts of German history, one of the foundations for the founding of the empire in 1866/1871. With the Rhine Province, the artificial existence of Prussia, the division into an eastern and western half, was newly reinforced and more pronounced than ever before. That became the main driving force behind Prussian power politics; in the end, it was a matter of overcoming this split. Prussia's role as the protective power of Germany on the western border - in connection with the dichotomy - meant that his own security was inseparably linked to his position in Germany; his striving for a hegemonic position, at least in the north, was therefore almost a necessity. If the small Germans later spoke of a 'mission from Prussia' for the protection and therefore the unification of Germany, one must say that Prussia was strategically and geopolitically forced into this 'mission'. Finally - the defense task has newly stabilized and legitimized Prussian militarism; at the same time, the Rhine Province has made Prussia the strongest German economic power and further developed its peculiar modernity: the internal structure was also fundamentally shaped by this decision of 1815. "

Even during the Congress of Vienna, the ordinance on the improved establishment of the provincial authorities of April 30, 1815 planned and ordered a division into ten provinces for the foreseeable, substantially growing extent of the Prussian state. The details of the new border with the Netherlands were laid down in a border treaty in Aachen on June 26, 1816. The two provinces initially formed, Jülich-Kleve-Berg , based in Cologne, and the Grand Duchy of Lower Rhine , based in Koblenz , were united into one province by cabinet order of June 22, 1822, which after the unification of the two consistories and medical colleges became the Rhine provinces and from May 1830 at the latest the Rhine province was called. The integration always remained problematic, as both the Rhineland and Westphalia adhered to the civil and commercial law , the chambers of commerce and the municipal constitution that had been introduced by the Napoleonic French.

The seat of the Upper President of the Rhine Province, i.e. the provincial government, was Koblenz. The high presidium initially had its seat there in the former electoral palace and from 1911 in a neo-baroque building on today's Stresemannstrasse (now the North Structure and Approval Directorate ). The Rhine Province was divided into the five administrative districts of Aachen , Düsseldorf (including Kleve , which was dissolved in 1822 ), Koblenz , Cologne and Trier . The administrative districts were in turn divided into districts with around 30,000 to 40,000 inhabitants each.

When the two principalities of Sigmaringen and Hechingen came to Prussia in 1850, they were combined as the Hohenzollern Lands and given the status of a Prussian province. They formed the Sigmaringen administrative district , for which various administrative relationships with the Rhine province existed.

The political and cultural integration of the Rhine Province into the State of Prussia was a great challenge. After all, the Rhineland was more advanced in terms of industry and trade than the other, largely agrarian provinces, and the Rhenish bourgeoisie was correspondingly self-confident, while in the rest of Prussia the primacy of the nobility was still undisputed. In addition, the majority of the Rhine Province was Catholic, which also led to reservations about the new authorities.

After the First World War , the western Rhineland was occupied by French, Belgian, British and American troops in 1918 (see: Allied occupation of the Rhineland ); the last occupation troops evacuated the Rhineland in 1930, five years before the date stipulated in the Versailles Peace Treaty . In the Versailles Treaty of 1919, the spatial division was also reorganized. The southern part of the Rhineland province (for the individual districts and cities see overview below) was spun off in 1920 and forms the Saar area with the former Bavarian-Palatinate area of the Saar -Palatinate district . The demarcation was based on the places of residence of the miners who worked in the coal mines in the region. In 1920 it was placed under French administration for 15 years with a mandate from the League of Nations .

With the Prussian strike of 1932, the governing authority of the Upper President was also effectively abolished in the Rhine Province, which facilitated the harmonization , which had been vigorously pursued after the Nazi takeover . When, after the Saar referendum on January 13, 1935, the Saar area came back to the German Reich , it was not re-annexed to the Rhine Province, but retained a special political position in which it was in fact more and more intertwined with the Bavarian Palatinate, as stated in the proclamation of the Reichsgau Westmark culminated. In March 1936, Hitler pushed through remilitarization with the German occupation of the Rhineland .

The southern area of ​​the Rhine province, which had become part of the French occupation zone with the administrative districts of Koblenz and Trier, together with the western Nassau areas ( Montabaur ) formed the province of Rhineland-Hesse-Nassau , since August 1946 the largest part of the state of Rhineland - Palatinate . In July over 100 parishes - v. a. the area on both sides of the lower Saar river - was annexed to the Saar area, which was only partially reversed when the area was exchanged between Rhineland-Palatinate and the Saar area on June 8, 1947, so that today's Saarland remained Prussian from 1920 to 1935, especially in the area Wadern and Perl .

In later referendums, the southern Rhinelander and the former Bavarian Palatinate decided to maintain the status quo and thus for the state of Rhineland-Palatinate.

The current state border between North Rhine-Westphalia and Rhineland-Palatinate happens to correspond to a relatively sharp dialect border . The Ripuarian dialect , also known as " Cologne dialect ", is spoken up to a few kilometers south of the state border, more precisely up to the Vinxtbach line (Dorp / Dorf-Isoglosse) , while south of this line it is Moselle-Franconian dialects .

Before the First World War , the province covered an area of ​​27,000 km². After Eupen-Malmedy and the Saar area were ceded in 1920 and the borders with the province of Westphalia in the Ruhr area and the province of Hesse-Nassau in the Wetzlar area changed, the area decreased to 24,477 km² by 1939.

Administrative division of the Rhine Province

Districts that still exist today are shown in bold .

Former Prussian government building for the Koblenz administrative district in Koblenz , today the seat of the BAAINBw

Other important cities in North Rhine-Westphalia

Other important cities in the southern Rhineland

(Office: Upper Presidium of the Rhine Province in Koblenz) 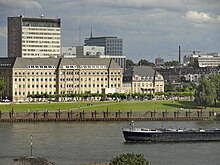 From 1887 the Rhenish districts formed a self-governing body , the Provincial Association of the Rhine Province .

In the province, the governor (until 1897: "Landesdirektor") was an official elected by the Rhenish Prussian provincial parliament since 1875. He headed the provincial self-government and was elected for a minimum of six and a maximum of twelve years. The regional council and technical officials, especially for the construction industry, stood by his side as auxiliary bodies. The provincial self-government had its seat in Düsseldorf since July 1, 1873. There, located directly on the knee of the Rhine , the official residence of the Rhenish governor from 1911 was Villa Horion next to the state house , in which the central administration of the Rhenish provincial association was housed. The governors were: 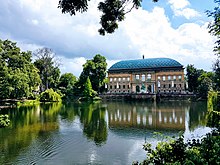 Only landowners had the right of representation there. In addition to five so-called noblemen, former imperial estates who owned viril votes , the provincial estates of the Rhine Province consisted of 25 representatives each from the knighthood (owners of manors ), the cities and the rural landowners.

From 1826 to 1843 his conference venues were the old chancellery on the market square , today part of the Düsseldorf town hall , from 1843 to 1851 the former governor's palace on Mühlenstrasse, from 1851 to 1872 the former electoral Düsseldorf palace on Burgplatz, and between 1872 and 1879 the auditorium of the city hall Secondary school on Klosterstrasse and finally, between 1880 and 1933, the specially built Ständehaus on Schwanenspiegel .

100% missing seats = nominations not represented in the provincial assembly

Elections to the Reichstag

Prussian milestone in the Middle Rhine Valley near Brey

After the Rhine province was added as a Prussian area, the Prussian state launched a major road construction program to improve infrastructure and economy. For example, a new continuous embankment road was built along the Rhine. A section between Bingen and Koblenz had already been completed by the French. Prussian milestones were set up to display the distance, most of which are still preserved today.

1861 there was in the Rhine Province

At the public schools, in which 520,940 children were educated, 2512 teachers and 840 teachers were employed. 12,312 children attended private schools. School supervision was carried out by school and church councils in the district governments.

The " Provinzial Rheinland Holding - A company of the savings banks " has been running since 2002 as a competitor company in the form of a legally competent public law institution in the state of North Rhine-Westphalia in the area of ​​the Rhineland Regional Association and in the state of Rhineland-Palatinate in the area of ​​the former administrative districts of Koblenz and Trier in the borders of December 31, 1966 (now: regional area of ​​responsibility of the Structure and Approval Directorate North ) the activities of the "Provinzial-Feuerversicherungsanstalt der Rheinprovinz" and the "Provinzial-Lebensversicherungsanstalt der Rheinprovinz" continue. Until September 2005, the Deutsche Rentenversicherung Rheinland called itself "LVA (Landesversicherungsanstalt) Rheinprovinz", which goes back to the old Prussian province.

In numerous places in the Rhineland and Saarland, the street name " Provinzialstrasse " still exists today for current state or federal roads , the road construction load of which was borne by the provincial administration of the Rhine Province.