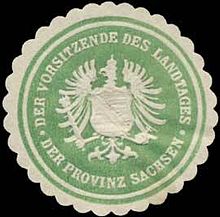 The first provincial parliaments in Prussia were established as provincial representative bodies on a corporate basis under the name Provinzialestand by the General Law on the Order of the Provincial Estates of June 5, 1823 and subsequent laws for the individual eight provinces and established in the years 1824 to 1827. At that time there was no state or popular representation in Prussia, so that the provincial estates initially represented the parliamentary institutions of the highest level. The provincial estates had a largely advisory role; wherever they were allowed to decide on affairs of the province they were under royal supervision. They did not have a legislative or tax authorization right.

The right of representation was held only by landowners who, depending on the type and size of the landed property, belonged to the ranks of the knighthood (owner of a manor suitable for the state assembly ), the cities or the rural landowners. In addition, in some provinces there were the landlords, former imperial estates that had virile votes .

The provincial estates should advise governments on laws relating to personal and property rights and taxes. They had legislative powers only in provincial municipal matters. Ruled by the nobility, the provincial estates became a predominantly conservative representative element in the state and organs of provincial particularism .

Only in the Rhenish , Westphalian , Prussian and Silesian provincial estates did a moderate-liberal opposition develop in the 1840s. At the request of the Provincial Parliament in the Province of Prussia in 1840 to create the promised state-wide representation, estate committees were introduced, which met in the time between the sessions. They also debated general government issues as United Committees . In 1847 Friedrich Wilhelm IV appointed all the Prussian provincial estates as the United State Parliament for the first time , in order to circumvent the introduction of a parliament called for by the anti-feudal opposition.

Abolished in the course of the revolution of 1848 , the provincial estates were reactivated in the post-revolutionary reaction era by the decree of May 18, 1851. It was not until the Prussian provincial order of 1875 that they were repealed in their previous form.

After the annexation of the Free City of Frankfurt , the Electorate of Hesse-Kassel and the Duchy of Nassau , a municipal parliament was formed for each of the three areas. Representation of the people took place in the province of Hessen-Nassau at the level of the administrative districts of Wiesbaden ( Nassau municipal parliament ) and Kassel ( Kurhessischer Kommunallandtag ). Until the administrative reform of 1885/86, which led to the integration of Frankfurt and its rural communities into the Wiesbaden administrative region, the Frankfurt Municipal Association also existed . The reform combined the districts of the administrative districts to form a higher municipal association, called Bezirksverband Kassel or Wiesbaden, which performed the tasks that a provincial association would otherwise take over.

In the Hohenzollern Lands , which had already been affiliated in 1850 , the representatives of the people existed from 1875 in the municipal council for the Hohenzollern regional association founded in 1873 .

Provincial parishes based on the provincial order of 1875

Provincial parishes were formed in Prussia on the basis of the provincial order of June 29, 1875. The members were elected for six years by the magistrates and district assemblies of the counties and cities of the province. The provincial assembly should be convened by the king every two years.

The provincial parliaments have been significantly strengthened. They were now self-governing bodies with their own finances and their own area of ​​responsibility ( state show lakes , social welfare, improvement , promotion of science and art, housing and settlement). The fact that the provincial parliaments met in public also contributed to increasing their effectiveness.

In the Duchy of Saxony-Lauenburg , which was not attached until July 1, 1876 (incorporated into Prussia as the District of Duchy of Lauenburg ), there was parliament for the Lauenburg Regional Association founded in 1872 . The territory and tasks of the state municipal association existed until 1945.

Provincial Diets in the Weimar Republic

They were elected for four years. Their membership numbers were based on the population of the province. The provincial parliaments elected the governor (in Berlin: Lord Mayor; in Brandenburg: state director) and each formed the provincial committee from among their number.

A new addition was the provincial parliament of the Posen-West Prussia border region in 1922 . In 1926, direct elections to the Provincial Parliament of Schleswig-Holstein were held for the first time in Lauenburg (catching up on the provincial elections on November 29, 1925), so that the Lauenburgers have since sent directly elected representatives to the Lauenburg Municipal and Schleswig-Holstein Provincial Parliament.

Legal successor in the Federal Republic

While in most of the former Prussian state the provincial self-governing institutions disappeared with the dissolution of the provinces, successor institutions exist or existed in some federal states. In North Rhine-Westphalia, for example, the regional associations of Rhineland and Westphalia-Lippe are directly linked to the previous institutions in terms of structure and tasks. The Wiesbaden district association existed until 1953, the Hohenzoller regional municipal association until 1973.