Logo of the LWL

The Landschaftsverband Westfalen-Lippe (LWL) is a public corporation formed in 1953 without territorial sovereignty in North Rhine-Westphalia with its seat in Münster . It succeeds the Provincial Association of the Province of Westphalia and, with 17,000 employees, is responsible for an area with 8.3 million people.

The responsibility of this Regional Council includes the parts of the country Westphalia and Lippe . The districts and cities in this area are the members of the LWL, which performs regional tasks within the framework of local self-government . With its 35 special needs schools, 21 hospitals, 18 museums and as one of the largest German aid providers for disabled people, the LWL fulfills tasks in the areas of social affairs, youth and school as well as psychiatry , penal institutions and culture. The last area also includes fiber optic archeology for Westphalia .

The Regional Association of Westphalia-Lippe has the following 18 districts and 9 independent cities as members:

The tasks of the landscape assembly include, among other things, the election of the LWL director and the state councils, the enactment of the budget statute and the definition of strategic goals, taking into account the resources.

At the beginning of the 14th electoral period (2014–2020) the following parties were represented in the landscape assembly (116 seats in total): CDU 46, SPD 40, Greens 13, Die Linke 5, FDP 5, AfD 3, FW 2, Piraten 2. At least 4 members of the landscape assembly can join together to form political groups. In addition to the parliamentary groups from CDU, SPD, Greens and Die Linke, the representatives of the FDP and FW have come together to form the FDP / FW parliamentary group. Since AfD and Piraten each have less than 4 mandates, the members of these parties form groups. Groups have only very limited rights vis-à-vis political groups. The CDU and SPD parliamentary groups form a grand coalition. In the previous election period, the SPD, the Greens and the FDP / FW formed a "design majority" after a grand coalition had also determined the fate of the state house for years. Dieter Gebhard (SPD) has been the chairman of the landscape assembly since the beginning of 2010. The parliamentary group chairmen are Eva Irrgang (CDU), Holm Sternbacher (SPD), Martina Müller and Heinz Entfellner (Greens), Arne Hermann Stopsack (FDP / FW) and Barbara Schmidt and Rolf Kohn (Die Linke). The landscape assembly of the 14th electoral period was constituted on September 18, 2014.

In May 2015, the spokesman for the AfD group left the AfD. This means that the AfD group only has 2 members of the landscape assembly. A few days later he joined the FDP / FW faction as a non-party, which has since then had 8 members.

In November 2017 one member left the Greens group. It still belongs to the landscape assembly as a non-attached party.

In December 2018, two members left the Die Linke parliamentary group. You still belong to the landscape assembly as non-attached. This means that the parliamentary group no longer has the necessary number of 4 members. The remaining members then founded the group Die Linke, which thus has 3 members.

Director of the landscape association

Matthias Löb , who was elected as Kirsch's successor on January 30, 2014, has been in office since July 1, 2014 . In addition to the official name, Country Director is usually used as an abbreviation.

During the time of the Provincial Association of Westphalia, the main administrative officials were called governor .

The LWL budget for the 2020 financial year is around 3.5 billion euros. About two thirds of the income is collected from the 27 member cities and districts in the form of a levy. These contributions are based on the municipalities' tax revenue. The state of North Rhine-Westphalia is also allocating 658.1 million euros to the LWL for 2020. Almost 90% of the household budget is spent on social benefits.

The Regional Association of Westphalia-Lippe is involved in various companies. The municipal services of the LWL are bundled in the Westfälisch-Lippische Vermögensverwaltungsgesellschaft mbH .

Participations at the end of 2015 were, for example:

Previous holdings in WestLB and NRW.Bank no longer exist.

After climate activists demonstrated against LWL's stake in RWE in autumn 2019, the finance committee decided to sell a quarter of the RWE shares.

The LWL performs tasks in the areas of social affairs, youth and school, culture, psychiatry and penal measures. The main areas of activity of the LWL are tasks that, for financial reasons or due to their nature, cannot be carried out individually by each city and district. Certain tasks can be solved more effectively and economically on a large scale, for example the establishment of psychiatric clinics or schools for the blind and deaf. The LWL also works on behalf of the federal and state governments. This includes, for example, securing and treating mentally ill offenders.

The Regional Association of Westphalia-Lippe is committed to social issues for the numerous disabled people in Westphalia-Lippe. One focus is the optimal structuring of living conditions in general (LWL-Behindertenhilfe Westfalen). Another focus is the securing and disability-friendly design of jobs in the general labor market (LWL Inclusion Office Labor). In addition, war, military service and civil injuries as well as victims of vaccinations and victims of acts of violence are supported through individual services (LWL Office for Social Compensation Law).

The LWL is particularly committed to the integration of old, sick and disabled people into society. As one of the largest social assistance providers in Germany, it supports 59,000 physically, mentally and emotionally disabled people in Westphalia-Lippe with 1.8 billion euros annually. The support and support of the handicapped is provided, among other things, by inpatient facilities, outpatient assisted living, workshops for disabled people and day care centers for mentally disabled people.

Services of the Labor Inclusion Office

The Integration Office of Westphalia collects the severely handicapped compensation tax from companies and supports severely handicapped employees with all questions relating to the workplace with these amounts. It is a service operation for 90,000 severely disabled people in over 25,000 companies in Westphalia-Lippe. For example, it advises severely disabled people and their employers on setting up and redesigning workplaces that are suitable for disabilities, which are also financed by the LWL. In addition, the LWL Inclusion Office is responsible for special protection against dismissal for severely disabled people. Whenever possible, measures are taken to keep a job.

As part of the welfare for war victims, the LWL-Hauptfürsorgestelle Westfalen supports 28,000 war victims and survivors, who in particular receive care assistance. In addition, services are provided for people who, for example, have suffered permanent damage to their health while doing military or community service, who have been the victim of an act of violence or who are dependent on help due to a vaccine damage.

Services provided by the LWL Office for Social Compensation Law

The LWL Office for Social Compensation Law supports over 35,000 war victims and their survivors, victims of acts of violence, victims of vaccinations, soldiers and community service providers. It helps these people with all questions relating to the benefits of social compensation law. This includes medical and medical treatment, health cures, the supply of orthopedic aids to pension payments (basic pension, compensation pension, compensation for occupational damage, severely disabled and care allowances). 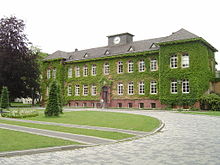 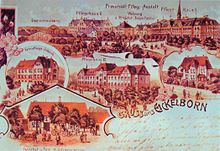 The LWL is also the sponsor of the LWL-PsychiatrieVerbund Westphalia, which offers a wide range of services for treatment, rehabilitation, integration and care for people with mental illness, mental disabilities or intellectual disabilities. With around 6,600 beds and places, the LWL-Psychiatrieverbund Westfalen, as a health care provider, forms an essential pillar of psychiatric care for the 8.2 million inhabitants in Westphalia-Lippe.

as well as four clinics for child and adolescent psychiatry:

There are also ten LWL residential associations, seven LWL care centers and seven LWL rehabilitation centers and LWL institutes for rehabilitation. The LWL is involved in other facilities. Day clinics and institute outpatient clinics are connected to the clinics. A research institute, four academies, two conference centers and three schools complete the spectrum of the LWL-PsychiatrieVerbund Westphalia.

The LWL operates six correctional clinics in which it treats and protects mentally ill and addictive offenders for the state of North Rhine-Westphalia.

1.6 million young people live in Westphalia-Lippe. The LWL youth welfare service is responsible for improving their living conditions and promoting them.

The state youth welfare office of the LWL supports the youth welfare offices of the municipalities, cities and districts as well as the independent youth welfare organizations in their work for children, young people and families. This includes advising and training specialists as well as promoting facilities and projects. It supervises youth welfare institutions (day-care centers and institutions for home education). To explain: The independent sponsors embody everything that does not count towards local youth welfare. These include, for example, the parents' initiative, which runs a kindergarten, or the church, which runs youth centers and family education centers, or associations such as Caritas with their marriage and life advice centers. In addition, the LWL maintains five facilities of its own for young people who live in residential groups as a substitute for families, as well as for educators and social workers in training.

The LWL operates 35 special schools with the special focus on vision, hearing and communication, language and physical and motor development. 6,400 disabled children and young people are supported in the schools of the LWL according to their abilities. For this, the LWL provides the necessary classroom and the necessary equipment. Most LWL schools teach in the area of ​​primary and secondary schools. Some funding priorities also enable a secondary school leaving certificate. In addition, the LWL is the sponsor of a vocational training center in Soest for the promotion of blind and visually impaired people, of four boarding schools and of a vocational college in Hamm, which specializes in motopedics, curative education, social education and curative education care.

The LWL is the sponsor of the youth farm Vlotho , an educational institution in the field of child and youth welfare, the youth welfare center in Marl , a curative educational children's home in Hamm , the "LWL Berufskolleg - Fachschulen Hamm" and a youth home in Tecklenburg .

The association promotes culture in the region through financial support for state theaters and orchestras as well as projects and publications. To this day, the regional association is also in possession of the Kaiser Wilhelm monument built by the Prussian province of Westphalia at Porta Westfalica . The LWL plays an important role in the field of cultural funding and cultural partnerships. On the website lwl.org there is a cultural calendar with all events of the cultural institutions for the period of the following 30 days. The LWL also publishes the magazine Westfalenspiegel , which appears six times a year . This is published by the association's own subsidiary, Ardey-Verlag . The LWL has chosen the monument of the month in Westphalia-Lippe since 1999 .

See also : The architectural and art monuments of Westphalia

The LWL is the sponsor of a total of 17 museums:

Five cultural services are available to citizens as well as districts, cities and municipalities:

Research institutes and scientific commissions of the LWL:

In addition, the LWL awards prizes to artists and scientists who have made outstanding achievements in the fields

In addition, once a year the sponsorship award for Westphalian regional studies is awarded to scientists from various disciplines who are not employed full-time in research .