The Lippe district is the second most populous district in the Detmold administrative district ( Ostwestfalen-Lippe ) in northeast North Rhine-Westphalia . The district town is Detmold .

The district follows the tradition of the former state of Lippe , which joined North Rhine-Westphalia in 1947 and has since formed its third part of the state (alongside northern Rhineland and Westphalia ). This position is symbolized by the Lippe rose in the coat of arms of North Rhine-Westphalia . The name of the district is derived from that of the ruling house that ruled until 1918 , whose ancestral seat was on the Lippe River , but which does not touch the district area.

The district of Lippe borders in a clockwise direction in the northeast on the districts of Schaumburg , Hameln-Pyrmont and Holzminden (all in Lower Saxony ), the districts of Höxter , Paderborn and Gütersloh , the independent city of Bielefeld and the districts of Herford and Minden-Lübbecke (all In North Rhine-Westphalia). This means that it has a common border with all districts in East Westphalia.

The circle stands in the tradition of the earlier territory in the Holy Roman Empire and the later German federal state of Lippe . The Lords of Lippe , first mentioned in a document in the 12th century , built up their domain here, were elevated to imperial counts in 1529 and imperial princes in 1789 . In 1815 Lippe joined the German Confederation and was a member state of the German Empire from 1871 to 1945 , since 1918 as a free state . The districts of Detmold and Lemgo had existed as administrative units since 1932 , to which the previously independent cities of Detmold and Lemgo were assigned in 1934.

In 1969 and 1970 the municipalities were reorganized into the districts of Lemgo (on January 1, 1969 by the Lemgo Law ) and Detmold (on January 1, 1970 by the Detmold Law ). 16 towns and communities were formed from the former 168 independent towns and communities in Lippe. The city of Lügde and the communities Harzberg and Kempen- Feldrom fell to the Detmold district, the Lippe exclave Grevenhagen to the Höxter district . In the Bielefeld Act , the previous Lemgo and Detmold districts were merged with effect from January 1, 1973 to form the Lippe district with its headquarters in Detmold .

This district largely coincides in its territorial extent with the former rule / county / principality and land of Lippe and can therefore look back on almost 900 years of continuous history and can be briefly understood as "Lippe" or "Lipperland".

According to the 2011 census , the majority of 51.0% of the population were Protestant , 12.5% Roman Catholic and 36.5% were non-denominational , belonged to another religious community or did not provide any information. The number of Protestants has fallen since then. According to the Lippe Regional Church (as of December 31, 2019) 152,409 (43.9%) of the 347,514 residents are Protestants .

Currently there is the following distribution of seats according to parliamentary groups in the district council (as of September 2014):

The Lippe district, formed in 1973 as part of the local government reform, has the Lippe rose in its coat of arms with the approval of July 17, 1973. Historically, the rose has been a coat of arms symbol for the rule, the county, the principality and the Free State of Lippe for centuries. Since the merging of the two districts of Detmold and Lemgo, the area of ​​the district of Lippe has essentially coincided with that of the former state of Lippe. It was therefore natural to consider the common history of unusual continuity over almost eight centuries to use the Lippe rose as the new coat of arms of the district. The 16 golden stamens symbolize the cities and municipalities of the new Lippe district.

See also : List of coats of arms in the Lippe district

In the Future Atlas 2016 , the Lippe district was ranked 236 out of 402 districts, municipal associations and urban districts in Germany, making it one of the regions with a “balanced risk-opportunity mix” for the future.

The European Center for University Studies of Seniors Ostwestfalen-Lippe is located in Horn-Bad Meinberg .

The building in which the Fraunhofer Institute is located is on the Innovation Campus Lemgo and was built by private investors as part of a public-private partnership . The research carried out there focuses on IT-based automation .

Promotion of education, science and research as well as culture

In 2016, a new major project was started with the Innovation Campus Lemgo .

The closest airports outside the district are Paderborn / Lippstadt , Dortmund , Münster / Osnabrück and Hanover airports .

The Lippe district is served by the two railway lines Lager Bahn , Herford – Paderborn and the Hanover S-Bahn . The operation in local passenger traffic is carried out by the train runs

Local rail passenger transport is carried out by the Eurobahn and on S-Bahn line 5 by DB Regio .

The district of Lippe is touched in the northwest by the Bundesautobahn 2 Dortmund - Hanover between Bielefeld and Herford. The federal motorway 33 in the Senne region from Bielefeld to Paderborn leads west past the district area.

In 2006 the district council decided to put out a public-private partnership project . It is intended to privatize road construction, road operation and road maintenance in the district. Within the population of this project is controversial, it has this one initiative group of citizens' formed. In its meeting on November 6, 2006, the district council rejected the petition as inadmissible.

The district is crossed by several long-distance cycle paths and local cycle paths, including the wellness route and the “BahnRadRouten” Hellweg – Weser and Weser – Lippe , as well as the R1 European cycle path from Boulogne-sur-Mer on the Atlantic to St. Petersburg in Russia. The district is a member of the working group for pedestrian and bicycle-friendly cities, communities and districts in North Rhine-Westphalia , as is the district town of Lemgo .

The agricultural use falls quite differently from in each region Lippe: While in August the village only 2.8% of the cadastral area is used for agriculture, they are in Leopoldshöhe 81%. This difference is mainly due to the Teutoburg Forest , because all regions that are directly on the mountain chain have only a small area used for agriculture (Augustdorf: 2.8%, Oerlinghausen 12.2%, Schlangen 13.8%). In Augustdorf and Schlangen there is a further restriction that a considerable part of the respective municipal area is occupied by the Senne military training area .

In addition, the Lippe Clinic in the health center in Bad Salzuflen- Schötmar has an operation center for child and adolescent psychiatry with 48 beds.

In addition to hospital planning, there are also numerous rehabilitation clinics :

Radio Lippe is the private local radio for the district. In addition to programs it has produced itself, it takes on the supporting program for Radio NRW .

The WDR maintains an office in Detmold that belongs to the WDR Studio Bielefeld and produces radio and television programs for the entire WDR and ARD .

The Lippische Landes-Zeitung is the local newspaper for the district on weekdays. The city of Lügde and its districts are part of the circulation area of ​​the daily newspaper Pyrmonter Nachrichten , a local edition of the Deister and Weser newspaper , Hameln. Lippe aktuell is an advertising-financed advertising paper that appears twice a week and is distributed free of charge to almost all households in Lippe.

Under the country's media law enthusiasts have the opportunity to own radio productions at the community radio radio broadcast lip. Radio workshops organized by volunteers are freely accessible for these productions (in Detmold and in Hörste ). 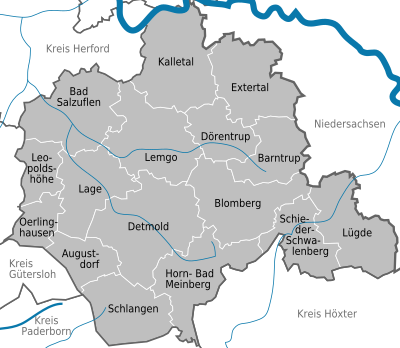 The Lippe district is made up of the following ten cities and six other municipalities (in brackets the population figures as of December 31, 2019):

These 16 municipalities are represented by the 16 yellow dots in the center of the coat of arms. Bad Salzuflen, Lage and Lemgo are medium-sized cities , Detmold is a large city .