The Teutoburg Forest is up to 446.4  m above sea level. NHN high low mountain range in the Lower Saxon mountainous region . Today it is located in Lower Saxony and North Rhine-Westphalia and extends from Tecklenburger Land past Osnabrück and Bielefeld to Horn-Bad Meinberg in the southeast. Up until the 17th century, the mountain range with the Egge Mountains adjoining it to the southeast was called Osning .

In 1616 the “Osning” was renamed “Teutoburg Forest ” by the geographer and historian Philipp Clüver - a (re) translation of the name teutoburgiensis saltus of the area where , according to the Roman writer Tacitus , the Varus Battle ( clades Variana - the “ Varus defeat “) Took place, in which a Roman was defeated by a Germanic army under the leadership of the Cheruscan prince Arminius . Clüver based his assumption on the Teutberg there . The Blomberg pastor Johannes Piderit was the first to agree with this opinion in 1627. The new name found its way into linguistic usage since the 18th century mainly through Ferdinand von Fürstenberg , Prince-Bishop of Paderborn and Münster, who adopted it in his “ Monumenta Paderbornensia ” in 1669 and also printed it on maps he published.

The part of the Teutoburg Forest located in the southeast of Bielefeld around the Ebberg ( 309.5  m ) is still called Osning today . Colloquially, the name Teutoburg Forest is often abbreviated as Teuto in the region . A section of the mountains near Bad Iburg is called Iburger Wald and the part between Oerlinghausen and Horn-Bad Meinberg is called Lippischer Wald . Historically, the Teutoburg Forest was also referred to as the Teutgebirg , as was the case with Ludwig Altenbernd .

View from the Hermannsdenkmal in north-west direction

Ferris wheel view over the southern suburbs of Osnabrück

The Teutoburg Forest is located in the Lower Saxon Uplands as part of the Lower Weser Uplands . Except for the section in the district of Osnabrück in Lower Saxony, it belongs to North Rhine-Westphalia. It covers approximately 105 km in length from the Tecklenburg country located Hörstel in the northwest, south of Ibbenbüren and Osnabrück passing through East Westphalia in Gütersloh , by the Bielefeld city and in the district of Lippe past Oerlinghausen and Detmold until after Horn-Bad Meinberg in the southeast .

Horn-Bad Meinberg is the interface to the south-facing Eggegebirge : It is located directly southeast of the Knieberg ( 365.1  m ) at the Silbermühle ( 249.1  m ) or at the Silberbach , which flows from Veldrom north-northeast to Leopoldstal ; In addition to the Buchenberg (approx.  385  m ) located south of the Knieberg but still west of the Bachtal, the Knieberg is one of the southeastern mountains of the Teutoburg Forest. South-east of the valley lies the northern flank of the Lippe Velmerstot ( 441.4  m ) with the Prussian Velmerstot (approx.  464  m ) beyond or south of it in the extreme north of the Egge Mountains. The Senne is located southwest of the mountain seam point as a sandy southwestern foreland of the southeastern Teutoburg Forest and as a western foreland of the northern Egge Mountains.

The Teutoburg Forest, together with the Wiehengebirge to the north, protrudes far into the North German Plain . To the southwest of the low mountain range lies the Westphalian Bay , to the east the Lipper Bergland .

The highest elevations of the Teutoburg Forest are with the Barnacken ( 446.4  m ) in its southeast part. In the north-west, the wooded mountains drop almost continuously until they reach their lowest point south-south-east of Hörstel am Huckberg ( 95.2  m ).

→ Main article : List of mountains and elevations in the Teutoburg Forest

The Barnacken ( 446.4  m ) in the extreme southeast of the Teutoburg Forest northwest of the Silberbachtal is the highest mountain in the entire range. The highest point in its central part is the Dörenberg ( 331.2  m ) near Georgsmarienhütte south of Osnabrück. The north-westerly hilltop (in the Osning) over 200 m is the Leedener Berg ( 202.4  m ) near Leeden north of Lengerich and east of Tecklenburg , around 450 m east of Federal Motorway 1 .

The Teutoburg Forest in the city of Bielefeld is popularly known as the Bielefelder Berg . As a rule, however, this only refers to the mountain pass on which the Bundesautobahn 2 crosses the mountains between the Eisgrundsberg ( 268.1  m ) and the Auf dem Polle ( 320.4  m ) and between the Bielefeld-Süd and Bielefeld-Ost junctions crossed to a maximum height of about 219  m .

The mountains and foothills (partly only heights of the Teuto main ridge), in the Teutoburg Forest and its foothills include - sorted by height in meters (m) above sea ​​level (MSL; unless otherwise stated usually loud) and with nearby towns:

The middle section of the Teutoburg Forest is part of the Weser-Ems watershed . Its extreme southeast, in which the Lippe Forest and the Barnacken mentioned above are located, is part of the Rhine-Weser watershed . The two watersheds meet in a hydrographic watershed point , which has been marked with the three river stone since 2009 .

The longest rivers that drain the Teutoburg Forest are the Ems (approx. 371 km), Lippe (approx. 220 km) and Hase (approx. 170 km). In addition, numerous streams and several small rivers arise in the low mountain range or in its foreland (sorted alphabetically):

The geological formation of the Teutoburg Forest began at the end of the Mesozoic about 65–70 million years ago. As a result of the Saxon quarry tectonics , there was a rupture between the large clods of the Rhenish mass and the Lower Saxon tectogen; this break is now known as the Osning fissure. The northern clod pushed itself over the southern clod, partly erecting the rock layers vertically and partly even causing them to tip over.

The rock layers from which the Teutoburg Forest later unfolded as described were formed when the region was almost completely covered by seas during the Mesozoic until around 65.5 million years ago. In the Triassic period , an important period between 251 and 199.6 million years ago for the formation of the rocks in the Teutoburg Forest, extremely thick sediment deposits formed on the sea floor . These are made up of material washed in from the mainland, mainly sand, and the limestone shells of marine animals. Further sediment layers were formed in the lower and upper Cretaceous (also sands and limestone). The Cretaceous sediments form the main ridges, especially in the northern part of the Teutoburg Forest. The sediments solidified under their own pressure. Sandstone formed from the sand and limestone formed from the lime deposits .

The ice ages of the Quaternary with their strong erosion also played an important part in the present-day appearance of the Teutoburg Forest with its pronounced long valleys .

Teutoburg Forest in Lippe, on the left the Grotenburg , on the right the Stapelager Berg

For the most part, the Teutoburg Forest consists of three parallel ridges, of which the northeast and southwest are cut through in many places by breakthrough valleys, while the middle one is only slightly cut in a few places. The crests are the result of the different hardness of the rock layers protruding obliquely from the depths. The mountains have only a few visible rocks, including the Dörenther Klippen in the northwest and the Externsteine in the southeast.

The geologically oldest ridge is the northern one, which consists of Triassic shell limestone. The middle ridge comes from the Lower Cretaceous, and is also the main ridge of the Teutoburg Forest, the highest point of which is the Barnacken ( 446.4  m ). This ridge is made from Osning sandstone . Geologically the youngest is the southern limestone ridge of the Upper Cretaceous .

The narrow ridges of the Teutoburg Forest - like the Wiehengebirge and the Weser Mountains  - were probably hardly populated. In these mountains, however, castles were built, with hilltops protruding into the plain being preferred. There they were only a few kilometers from the populated lowlands, had good connections there and could be easily reached. According to G. Mildenberger, the Grotenburg (at the Hermannsdenkmal), the Hünenburg near Bielefeld and the Tönsberg in Oerlinghausen are among the refugee or people castles of the " Rhine-Weser Germanic peoples " (cf. Cherusker ) around the birth of Christ . The Löwenburg in Lämershagen , a Bielefeld district in the Stieghorst district , is also a hill fort that was used until the High Middle Ages. Her name refers to Henry the Lion .

In addition, there are two knight's castles in the Teutoburg Forest, today more reconstructed than the original: Ravensberg Castle near Borgholzhausen gave the Ravensberger Land its name. The Counts of Ravensberg later moved their headquarters to the Sparrenburg in Bielefeld, whose rafter is now the emblem of the city of Bielefeld and the entire Ravensberger Land and which was the administrative seat of the region until the first decades of Brandenburg rule. Another count's seat was Tecklenburg Castle in Tecklenburg . After the county of Tecklenburg came to Prussia , it was largely demolished in 1744 by order of the Prussian government. The region is named Tecklenburger Land after this count's seat .

In the late Middle Ages, the time of the smallest forest and most extensive arable land in Central Europe, ridges were also used for agriculture, which are now wooded again. The Ochsenheide in Bielefeld is a former arable land of this type that has not been reforested.

Almost all wooded mountains of the Teutoburg Forest are attractive for hiking with an extensive network of trails . The 156 km long Hermannsweg , one of the German long-distance hiking trails , leads mostly over its main ridge as part of the Hermannshöhen . Since September 5, 2008, it has been a quality hiking trail certified by the German Hiking Association . Between the mountains Bielstein in the west and Grotenburg in the east lies the Heidenbachtal, which runs in a north-south direction and is popular with hikers . The Eggeweg, which is signposted and advertised as Hermannshöhen together with the Hermannsweg, is also certified according to the criteria of the German Hiking Association . Other certified trails in the Teutoburg Forest holiday region are the Paderborner Höhenweg , the Viaduktwanderweg near Altenbeken and the Hansaweg between Herford and Hameln.

The Teutoburg Forest holiday region, with a total of seven spas, has a very high density of health offers. In addition to classic spa and rehabilitation stays, privately paid health holidays are also increasingly developing, which are not identical with wellness in the narrower sense. The medical competence of the clinics and hotel offers are linked. 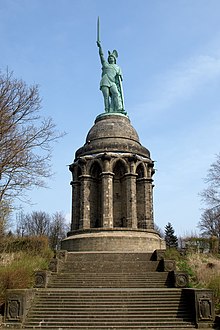 The excursion destinations and sights in or near the Teutoburg Forest include: