The Westphalian Aa in Herford near Bielefelder Strasse 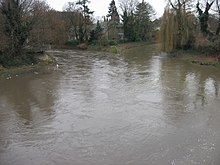 The Aa (rarely: "Westphalian Aa"), in the upper reaches of Johannisbach , is a left tributary of the Werre in north-eastern North Rhine-Westphalia , in the urban areas of Bielefeld and Herford .

The Aa is also referred to as the Westphalian Aa to distinguish it from other rivers (mostly also located in Westphalia ) with the name Aa . Its upper course is called Johannisbach. Johannisbach and Aa are hydrogeographically identical and are continuously kilometered, although the lower and upper reaches are known under the two different names in local parlance and are therefore regarded as two different rivers. The additional designation "Westphalian" is now uncommon in local language as well as in map series. The Westphalian name Aa (Lower Saxony Aue , Schleswig-Holstein Au , High German Ach, Ache, Achen or Aach , Old High German Aha , Swedish A , Danish Å ) means water or river and possibly goes back to the Latin aqua . In the Middle Ages the Aa was called "Hardna". 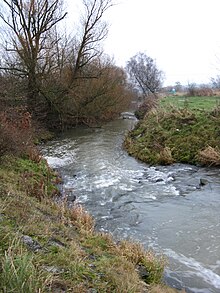 The Johannisbach rises near Uerentrup in the Teutoburg Forest , west of the Bielefelder Pass . It initially flows in a north-westerly direction through a longitudinal valley of this mountain range, away from Bielefeld city center. At Großdornberg it leaves the mountains through a breakthrough in the northern ridge and then flows first northeast, then eastward through the Ravensberg hill country . He picks up Schwarzbach from Werther .

In the Milse district of Bielefeld , the Johannisbach joins the Lutter coming from the south , which took in the wind drift three kilometers earlier , and is referred to as Aa from this point on. The Aa then flows through the Brake district and reaches Herford , where it forms the border between the Elverdissen districts on the right and Stedefreund and Diebrock on the left. In the further course the Aa is the border river between Altstädter Feldmark and Radewiger Feldmark , between Old Town and Radewig and between Herford Neustadt and Radewiger Feldmark. In the Radewig / Neustadt area, the Aa is dammed by means of two weirs. Here the city moat branches off to the left, which, in contrast to the main arm, flows around the Radewig district to the west. Shortly before the moat joins the main arm again, the Bowerre joins the Aa from the right . After 26 km (8.6 km after the tributary of the Lutter) the Aa flows into the Werre at the Hansastraße bridge (Werre km 22.5), passing the MARTa Herford museum on the back just before the confluence .

Its catchment area covers an area of ​​254.5 km². Since Johannisbach and Lutter drain parts of the slope of the Teutoburg Forest, the Aa has a high flood potential .

On its way, the water includes the following waters when viewed downstream:

Legend:
L / R: Left or Right Inflow
KM: River kilometers measured from the mouth of the main river upwards
L: length of the tributary in kilometers
H: mouth heights in m according to DE-NN if known

The Aa or Johannisbach marked the border between France and the Kingdom of Westphalia between 1811 and 1815 . This happened when Napoleon annexed the German North Sea coast in 1811 as part of the continental blockade . Large parts of the department of the Weser , with the Johannisbach as part of the new border, were separated from the Kingdom of Westphalia and assigned to the department of the Upper Ems , one of the four newly created Hanseatic departments .

From 1939 to 1972 the Johannisbach was the northern border of the city of Bielefeld.