The title of this article is ambiguous. Further meanings are listed under Source (disambiguation) . 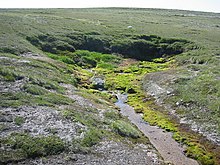 A spring is a place where groundwater emerges permanently or temporarily at the surface of the terrain in a natural way. In most cases, it is (meteoric) groundwater fed by precipitation. Only in rare cases does the water come from deeper parts of the earth's interior ( juvenile water ).

Classification according to hydrostatic pressure

Classification according to the temporal course of the spring discharge

Classification according to source temperature

The water temperature of a spring usually corresponds to the local mean annual temperature of the air and is constant over the season. In Central Europe the temperature is then around 6 to 10 ° C, in tropical areas around 20 to 25 ° C. If the feeding aquifer is less than 20 meters deep, there may be slight seasonal fluctuations in the source temperature.

Sources that have a particularly high content of dissolved gaseous or solid substances are called mineral springs . Balneology deals with the effects of healing springs . Mineral springs can be further subdivided into brine springs , sulfur springs, acidic springs, alkaline springs, bitter springs, iron springs and radioactive springs. The carrier of radioactivity in radioactive sources is the noble gas radon, which usually arises from the decay of uranium or thorium-containing minerals in granite or gneiss rocks (cf. radon balneology ).

Classification according to structural features in the source catchment area

Classification according to structural features of the source location

( Wells are artificial groundwater outcrops and are not referred to as sources .)

The so-called krenal , i.e. the spring habitat, is a small-scale habitat whose physical and chemical factors, with the exception of karst springs, remain fairly constant. If they change, it can have a major impact on the krenal. Except in the case of heavy pollution of the groundwater, sources are oligotrophic waters.

A distinction is made between the habitat of the spring-dwelling organisms, the crenobionts , in the eukrenal , the actual source area, and the hypocrenal , the adjoining habitat in the upper spring outlet. The hypocrenal reaches only as far as the living conditions of the source flow are still shaped by the water outlet. If organisms predominantly inhabit the krenal , they are referred to as krenophiles , but if they rarely appear there, they are called krenoxene . 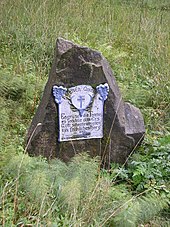