This article treats the well as a water basin and a deep well; further meanings under fountain (disambiguation) . 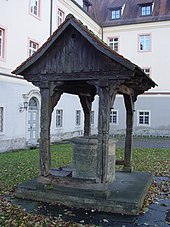 Draw well in the courtyard of the Wald monastery

A well is a structure used to obtain water from an aquifer . Various types of pumps are used for pumping out of the groundwater , in the past hand pumps, today mostly electric submersible and suction pumps. Likewise, other mechanical devices such as well buckets or water arts for pumping water are common. A special form are artesian wells where the well in a confined aquifer drilled , so that no facilities are required for water pumping. The same applies to spring taps and water pipes and other wells that are fed by natural or artificial water pressure in the supply pipe. This permanently available water pressure is also used for fountains .

Drinking water is a prerequisite for human survival. Throughout human history, temporary camps and settlements have been established near water points such as springs, rivers, and freshwater lakes.

Three pits are known from the mesolithic Friesack residential area in Brandenburg , which were dug by hunters and gatherers to obtain drinking water (water holes). This function is indicated by scoops made from a turtle shell and made of birch bark, which were discovered on the bottom of the pit.

Wells have been in the Mediterranean since around 8000 BC. Proven as in Atlit Yam (Israel) or Kissonerga-Mylouthkia and Shillourocambous in Cyprus , where they were sunk in the massive sandstone. From the pre-ceramic Neolithic (approx. 7000 BC) there are three wells in Atlit Yam (Israel). In Central Europe , wooden wells have been known since the early Starčevo culture (around 6000 BC), from a site near Slavonski Brod in Croatia .

A number of testimonials from the Bandkeramischen well construction document the spread of this type of water supply since the first rural settlement of Central Europe. The earliest ribbon ceramics well can be found in a settlement of the oldest ribbon ceramics in Mohelnice ( Moravia ). Dendrodata are available for the planks that date back to 5540 to 5460 BC. Point out. In addition to the first phase of the Plaussig well , Eythra two (in the Zwenkau opencast mine ), Brodau and Dresden-Cotta are dated to the 53rd century BC (between 5300 and 5200 BC). There is a concentration of dated wells around 5100 BC. BC, as in the case of Erkelenz - Kückhoven , Eythra 1 and the Altscherbitz fountain . The Niederröblingen fountain ( Mansfeld-Südharz district ), discovered in 2007, fits into this fountain horizon of the younger band ceramics.

Europe's deepest Stone Age well (over 15 m deep) (around 5100 BC) was discovered near Merzenich- Morschenich and recovered in the block. From the string ceramics are well known with a lining of wattle.

Wells for water production and as a useful well

A deep well (or draw well) is a mostly vertical man-made opening in the ground or in the rock, which can be either small and piped or large and preserved due to the natural strength of the surrounding material (accessible wells). In North German, dug wells used to be called Sodbrunnen or just Sod , in the Rhineland the term “Pütz” (from French puits ) was common. The water is pumped upwards from modern, narrow bores using technical aids ( winch or pump , e.g. a handle pump ).

Draw wells have been documented since the early Neolithic (Cyprus) as ancient shafts that were stabilized in the ground by wooden structures (wooden box wells). Such scooping devices serve to facilitate the procurement of water, in particular when watering cattle herds . Well-known example are the wells of the Puszta , which can be found in the entire steppe belt of Eurasia and elsewhere. In addition to leveraging the swing boom , on which counterweights make work easier, wheels, ropes and draft animals ( buffalo , donkey , camels ) are used. On the other hand, the pulling devices common in Central Europe are less effective: A pulling rope was wound onto a relatively small log or pulled over a pulley that was suspended from a double-sleeper gallows ("gallows well").

Before the establishment of fire brigades and the creation of extinguishing water ponds, the community draw well was often one of the few options for drawing water for firefighting on the plains . Large buckets with a pull chain had to be held in front of the well.

Spring catchments are often developed directly or in the immediate vicinity with a well. Even if they are developed as a surge tank for feeding into the pressure pipe, the excess water can still fill a well. If the expansion is covered, one also speaks of a well house.

In a broader sense, the large water pipe supplies to the cities near the mountains, which have been common since the ancient civilizations via the Roman pipelines with their aqueducts , are also supplied by springs . One of the most important such systems that are still in operation are the Viennese spring water pipelines .

An artesian well is a well from which groundwater rises through excess pressure. 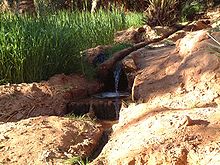 A Foggara Canal emerges in an oasis in Morocco

The qanats, which are particularly widespread in Iran, Afghanistan and the western part of Pakistan, represent a special well shape . They are horizontal water collecting tunnels running underground with often hundreds of vertical access shafts; they are mainly used to irrigate fields kilometers away. Qanate can be found in almost all countries on the Persian Gulf as well as in Afghanistan, Pakistan, Syria, on the edge of the Taklamakan and in the entire Maghreb and on the Canary Islands . Therefore there are many different names for them: In Persian they are called Kariz or Karez (كاريز, DMG Kārīz ). In Oman they are called Falaj , in the Maghreb their name is Foggara , which means something like "underground tunnel". The terms Rhetara , Khettara or Hattara are also used in Morocco .

In the entire Indian subcontinent , especially in the states of Gujarat , Rajasthan and Uttar Pradesh , stepwells ( vavs , baolis ) played a major role in the public water supply. Strictly speaking, it is a combination of a well and a cistern : a round well shaft was led down to the groundwater level; a side staircase, which was covered by rainwater at different levels in the monsoon season , led down to the water, which made it much easier to fetch water (see also Rani Ki Vav , Chand Baori ). 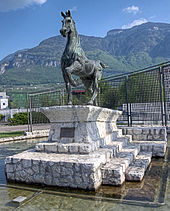 Until the introduction of tap water, wells were a meeting place for people and especially for washerwomen as public places for water supply . In many countries they still have this social function. Many historical fountains are now under monument protection and some are considered sights. As a result, well systems continue to be a point of attraction in public spaces.

Fountains have often been lavishly designed as symbols of the power or influence of the builder since the Renaissance , for example the Trevi Fountain in Rome was built as a foundation by Pope Nicholas V on the occasion of the restoration of the Aqua Virgo aqueduct .

With the advent of water pipes that brought the utility water directly into the households, the extraction and washing wells disappeared in public spaces. In many villages and towns they were replaced by more or less artistically designed fountains. You can then often achieve the complexity of water features : Fountains , cascades and pools are also part of such water features .

The water cools down through evaporation in summer and thus contributes to the improvement of the microclimate. In the Islamic world, indoor fountains are an important part of palaces as they lower the indoor temperature.

Ornamental fountain systems have a circulation pump ; therefore only the evaporated water is replaced. Such wells should be emptied before the first night frosts begin. 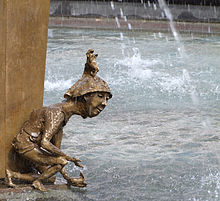 In Upper Franconia , especially in the Franconian Switzerland , there is the custom , Osterbrunnen to celebrate the Easter decorate. In some cities in the Swabian region there is a custom of washing your wallet every year in the fountain. In some cities people are thrown into a fountain during Carnival . Coins that are thrown into a fountain are said to lead to happiness or a return to the fountain, especially with the Trevi Fountain in Rome. Every year elementary school children celebrate a fountain festival at the Popperöder spring in Mühlhausen / Thuringia . Bouquets of flowers are thrown into the fountain, fountain dances are performed and fountain songs are sung.

In Endingen am Kaiserstuhl there is a special spectacle every year on Carnival . On Dirty Thursday the Jokili is ceremoniously lifted from the town hall fountain. Only now does the actual carnival time begin. On the evening before Ash Wednesday, the Jokili is sunk again after a “funeral speech” has been completed in the well, where it remains until Dirty Thursday of the following year.

Because of their importance for the life and survival of people, wells can also be found in local coats of arms.