This article deals with the place in northern Burgenland. For the place of the same name in Styria, see Sauerbrunn (municipality of Stainz) .

The municipality belongs to the Rosalia-Kogelberg Nature Park .

The borders of Bad Sauerbrunn have grown historically. Parts of the closed settlement area belong to other communities (Lichtenwörth, Pöttsching and Wiesen). A hotter adjustment is not in sight. And that is how the railway and state road run between Neudörfl and Bad Sauerbrunn through the Wiener Neustadt-Land district .

Under the Romans, today's Bad Sauerbrunn was then in the province of Pannonia . 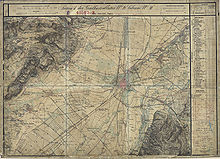 The first scientific mention of the sources can be found in Johann Heinrich Cranz 'monograph from 1777 on the healing springs of the empire.

It was not until the end of the 19th century that today's village emerged in the municipal area of Pöttsching . At this time the increased use of the mineral water source began, which was then also known as "Pöttschinger Sauerbrunn".

In 1800 Prince Nikolaus Esterházy had the water examined, the spring drawn and roofed over. As a result, an inn was built in 1803.

In the middle of the 19th century there were only three large buildings: an inn, the “Pöttschinger Sauerbrunn” station and Dr. Finch.

The village of Sauerbrunn has been opened up by the Mattersburger Bahn since 1847 and in 1901 was given permission to use the title "Kurbad". The place soon developed into the popular summer residence of Viennese, Budapest and Sopron society.

The establishment of a sanatorium and a health resort by the Viennese doctor Hermann Grimm , who came to Sauerbrunn as the new tenant of the bathing establishment, increased the good reputation of the health resort.

In 1909 Sauerbrunn achieved the status of a small community, whose official name was Savanyúkút . Since the place continued to develop so favorably, the small community was transformed in 1911 into a large community with its own notary and registry office.

The First World War led to the establishment of a convalescent ward and subsequently a hospital was set up in the Hartig and Neuhaus villas.

Joseph Roth reported on the time around 1919 in the Vienna daily newspaper Der neue Tag under the title Journey through the Heanzenland . At that time his path took him from Wiener Neustadt via Neudörfl , Bad Sauerbrunn and Zinkendorf to Ödenburg.

On his escape from the “ White Terror ”, Tibor Szamuely , a prominent leader of the young Hungarian Soviet Republic , arrived in Sauerbrunn at the beginning of August 1919 .

Like all of German West Hungary, Sauerbrunn was awarded to Austria after the First World War after tough negotiations in the Treaty of St. Germain and the Treaty of Trianon in 1919 (see also History of Burgenland ). However, as the Burgenland provincial capital Ödenburg, planned by Austria, was ceded to Hungary as a result of the referendum in 1921 , Sauerbrunn was the provisional seat of the Burgenland provincial government and administration from January 25, 1921 to April 29, 1925 .

Although around two thirds of all spa guests were Jews, the so-called referendum of April 10, 1938 only resulted in yes votes for the Anschluss.

In Sauerbrunn, too, after the Anschluss, the Jewish fellow citizens were expropriated, expelled or sent to death camps.

As a result of the Second World War and the expulsion of the Jews and the opponents of the system, the spa business came to a complete standstill. The unused premises were used in the last years of the war for offices and homes of armaments factories (Raxwerke).

In 1944, until shortly before the Soviet troops marched in , the Belgrade soldiers' channel , known for its song Lili Marleen , broadcast its programs from the Hartigvilla as its last stop.

Armored units of the Red Army invaded on April 1, 1945 and liberated Sauerbrunn from the National Socialist dictatorship. In addition to the damage caused by fascism and war, there were the hard times of the occupation by the Soviet army.

After the end of the Second World War and the re-establishment of the Republic of Austria, Burgenland was re-established as a federal state at the instigation of the USSR .

The targeted, albeit protracted, expansion of the tourism and spa facilities, which were completely destroyed in the Second World War, as well as the high quality of the mineral springs led to the authorization to use the community name "Bad Sauerbrunn" on January 1, 1987. As a preliminary work, the Heilbad Betriebsgesellschaft was founded and a new spa center was built from 1982 to 1985.

In July 2006 the “Waldklinik Bad Sauerbrunn” was opened in the listed, appropriately adapted “Hartigvilla” as the first beauty clinic in Burgenland.

View from the Wetterkreuz to Bad Sauerbrunn

The community spring brings to light a magnesium-calcium-sodium-hydrogen carbonate-sulphate sourling, which has the highest magnesium content in Austria. This natural healing water is used for therapeutic purposes in the health center and spa center. There is the oncological rehabilitation clinic “Der Sonnberghof” with around 120 beds in town. When it opened in 2010, it was the first facility in eastern Austria to specialize exclusively in oncological rehabilitation.

Spa concert in the spa park 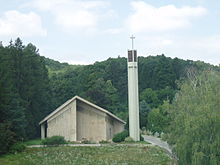 The municipal office of Bad Sauerbrunn

The council comprises a total of 21 members on the basis of population.

Gerhard Hutter (LIBS) has been mayor since the local council election in 2002 . In the 2017 direct mayor election, he was confirmed in office by 67.12% of voters. His competitors Petra Pahr-Gold (SPÖ) and Roland Hajos (FPÖ) did not exceed 25.47% and 7.42% respectively. In the constituent meeting of the municipal council, August Gruber (LIBS) was elected Vice Mayor.

Head of office is Harald Seedoch.

Blazon : “ In a blue shield under a silver viaduct that adjoins the edge of the shield on the side and top, a silver fountain bowl with two blue stripes, from which a silver fountain rises, which is accompanied by silver-framed blue pearls. "

Bad Sauerbrunn has a partnership with the Middle Franconian town of Spalt in Bavaria.

Cities and municipalities in the Mattersburg district