Map of postcode regions in Austria 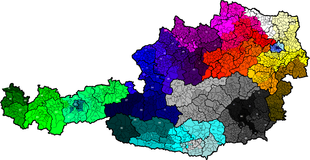 In Austria , postcodes must be four-digit and always full in the address. They were introduced on January 1, 1966 by the General Directorate for Post and Telegraph Administration. Each zip code identified a post office. The statement of the postcode indicated a certain acceptance, collection or delivery post office beyond the post office. This made it a rule for a city with multiple post offices to have multiple postcodes.

Since September 2009, the Österreichische Post AG website has made it possible to use a detailed online search function to search for postcodes and the associated localities with their “destinations”; however, this is hardly useful for searching within larger cities. In addition, current lists of all postcodes (including post office box and special numbers) and all localities (including postcode and destination) are available as an Excel table for free download. 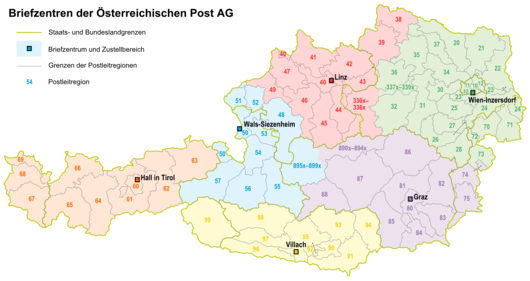 Map of the letter centers of the Austrian Post

In routing zone 1 (Vienna), the second and third digits of the postcodes identify the respective municipality district (e.g. 1030: 3rd district, 1120: 12th district) and the fourth digit is the routing location (post office) in the respective district.

However, there are some exceptions to this rule that are justified in terms of transport, especially for locations on the borders of the federal states. For example, the Upper Austrian municipality of Weyer has the postal code 3335, as it is supplied by post from Lower Austria. The Styrian-Lower Austrian border town of Tauch am Wechsel has a Burgenland postcode (7421), as it was confused with the town of diving in the Burgenland municipality of Mariasdorf when it was assigned.

Vienna-Schwechat Airport , located in 2320 Mannswörth , Lower Austria, has the postal code 1300, although it is in the municipality of Schwechat with the postal code 2320. In Vienna the UNO-City has the postcode 1400, although it is in the 22nd district (postcode 1220). Until September 2011 the Austria Center Vienna , also in the 22nd district, had its own postcode with 1450. The Vienna City Hall , despite its geographical position in the First District of Vienna not the zip code 1010, but that of the adjacent district 1080th

The two Austrian customs exclusion areas Jungholz in Tyrol and Kleinwalsertal in Vorarlberg, as customs connection areas in Germany, have both four-digit Austrian and five-digit German postcodes, these are:

The postal code 1008 is the shredder of the Austrian Post. Items with the note “Returns to PO Box 555, 1008 Vienna” will be rejected and destroyed when they are returned to the nearest distribution center. 1350, in turn, is used to record returns on behalf of bulk mailers. 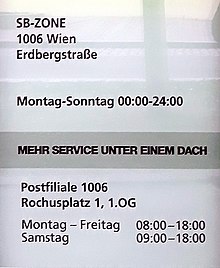 Postal code 1006 of the post office at Rochusmarkt, corner of Erdbergstraße (formerly 1030 Vienna)

Due to the closure of post offices, around 50 postcodes have been abandoned since 1999. But over 100 new ones have also been created. This gave municipalities that never had a post office the opportunity to have their own postcode assigned. By relocating delivery to regional delivery bases, municipalities that previously had several postcodes can now be given a uniform postcode.

With municipality mergers, which occasionally even move district boundaries, at least the correlations between delivery address-based postcodes and municipality boundaries change.

The introduction of the new postcodes at the beginning of 1966 was seen as such a significant event that the Austrian Post issued a special postage stamp on the occasion , which was first issued on January 14th of that year. On a yellow background, it shows a simple physical map of Austria in gray and white tones, on which the routing zone numbers of the postcodes (followed by three dots each) are arranged in red font according to their geographical regions. The face value was 1.50  schillings , which corresponded to a common value.

However, the circulation amounted to 30 million pieces, which was about ten times the normal circulation of a special stamp. The design comes from Karl Geßner . This advertised the use of postcodes and clearly displayed the zone numbering.

In Austria, too, an official map (with the logo of the Post, by the Freytag & Berndt publishing house , with new editions up to around 1988) of all postcodes, zones and areas was issued, the Austrian postal traffic map . It is available again as a reprint on paper.