The Austria Center Vienna with a roofed main entrance. In the background on the left the Saturn Tower and on the right the Vienna International Center (VIC). 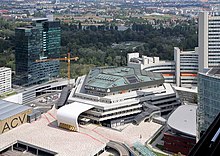 View from the DC Towers to the ACV 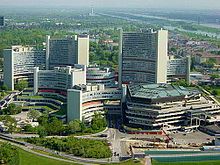 The entire complex of the UN City in 2003 (before the construction of the Saturn Tower) with the Austria Center Vienna in the foreground on the right; to the left of it and behind it the Vienna International Center (VIC).

The Austria Center Vienna ( ACV ) is Austria 's largest conference center . It is located in the 22nd district of Vienna, Donaustadt , and has the address Bruno-Kreisky -Platz 1.

The ACV is one of the leading conference centers in Europe and is used for international conferences with up to 22,800 participants, for company meetings and events, exhibitions and trade fairs. Together with the neighboring Vienna International Center (VIC), it forms what is unofficially known as the UN City . The operating company is the Internationales Office Seat and Conference Center Vienna, Aktiengesellschaft (IAKW-AG) , which is responsible for maintaining the VIC and for running the Austria Center Vienna.

There were violent political disputes over the construction of the conference center. The idea of ​​the then Federal Chancellor Bruno Kreisky ( SPÖ ) wanted to bring down the ÖVP . In 1982 she initiated a referendum under the motto “For 12,000 apartments, for secure jobs throughout Austria and against the unnecessary conference space”. This was signed by 1,361,562 Austrians eligible to vote from May 12 to 17, 1982 - the largest participation in a referendum in the Second Republic . Nevertheless, the conference center was built from 1983 to 1987 according to the overall plans of the architect Johann Staber . The construction costs last amounted to 3.5 billion schillings (around 255 million euros).

After a construction period of four years and ten months and a short period of trial operation, the official opening of the Austria Center Vienna took place on April 22, 1987 in the presence of Federal President Waldheim, Federal Chancellor Vranitzky as well as several Austrian ministers and high-ranking representatives of the owner company as part of a political ceremony instead of.

On May 17, 1987, the opening gala “Soirée in Vienna” followed, which was broadcast by ORF from the largest hall in the house to 32 countries. Peter Alexander moderated a number show in which well-known personalities such as Plácido Domingo, José Carreras, Gilbert Bécaud, Udo Jürgens, Jerry Lewis and many others appeared. For the first time, an American and a Russian star - Barry Manilow and Alla Pugacheva - sang a duet together.

In 2007 a fourth exhibition hall was added.

Beginning in the late 1990s, another neighboring area was the (still ongoing) development of Donau City on the so-called Donauplatte and adjacent.

Until September 2011 the Austria Center Vienna had its own postcode with 1450 .

The building complex of the Austria Center Vienna houses 24 halls and 180 meeting rooms. The main hall with a capacity of 3,000 people can be combined with two adjoining rooms, so up to 4,320 people can be accommodated in a joint event.

The Austria Center Vienna offers a total capacity for up to 22,800 people. The congress center has also had four exhibition halls since 2007. In 2019 the forecourt of the congress center was roofed over and can be used as a fifth exhibition hall when the side walls are closed. With the expansion of the multifunctional areas, organizers now have a total of over 26,000 m² of exhibition space.

On December 1, 2012, Susanne Baumann-Söllner was appointed to the board of directors of the Internationales Official Seat and Conference Center Vienna, Aktiengesellschaft (IAKW-AG) , the operating company of the Austria Center Vienna. Baumann-Söllner is responsible for the congress business as spokeswoman for the board.

Michael Rotter has been the technical director for renovation and construction projects since October 2017 and, as the representative of the Republic of Austria in the Major Repairs and Replacements Fund, is responsible for the administration of the Vienna International Center (VIC).

The grand opening in May 1987 was combined with a classical music concert. Heinz Neubrand was responsible for the musical design and Peter A. Moser and Ingrid Moser for the moderation texts. The texts were spoken in German by Brigitte Neumeister and Ernst Harmannstein and in English by Daniela Blyth and David Cameron . The concert was recorded and published as a long-playing record under the title Vom Wiener Kongress zum Austria Center Vienna 1815–1987 . As editor drew on the back of record covers the international headquarters and conference center and Vienna Aktiengesellschaft .