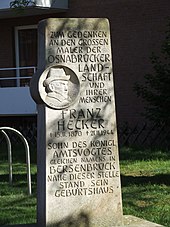 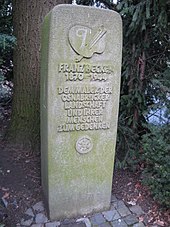 Holter Church in Bissendorf near Osnabrück - This view is called the Franz Hecker view because Hecker captured it in a picture.

Grave site of the Hecker family in the Johannisfriedhof in Osnabrück

Franz Hecker was born as the son of the Hanoverian bailiff Franz Hecker and his wife Maria Hecker born. Mues from Hastrup born. After the father's death, the family moved to Osnabrück. There he attended the Carolinum grammar school , but left the school before graduating from high school . Then, at his mother's request, he began an apprenticeship in a bank, which he broke off after two years. He received his further training from 1890 to 1893 at the Düsseldorf Art Academy , where he met Fritz Overbeck , Otto Modersohn and Heinrich Vogeler, among others , and has since visited the Worpswede artists' colony . In addition, he was in Munich for a study visit in 1893 (in the Nauen private studio) and in 1895 at the Académie Julian in Paris under William Adolphe Bouguereau .

Many of his works were dedicated to landscape motifs and personalities from Bersenbrück and were inspired by impressionism . In total, Franz Hecker created more than a thousand works using different techniques. The wall paintings in the conference rooms of the Bersenbrück town hall from 1913 are also by him.

Hecker was an amateur musician who formed a string quartet with friends . The Hecker Quartet included Bernard Wieman , Rudolf Gosling and the later privy councilor Schneider.

On January 9, 1944, Hecker was awarded the Justus Möser Medal by the city of Osnabrück. Franz Hecker was killed in a bombing raid on Osnabrück during World War II when a bomb rolled into the entrance of the bunker in his house not far from the zoo and exploded. A plaque at the site of the accident commemorates this event. On December 13, 1944, the writer Ludwig Bäte gave a speech in honor of the deceased at the public memorial service in Agnes Schoeller's house. His grave is in the Johannisfriedhof in the Osnabrück Neustadt.

The Nahner Elementary School founded in 1909 (today the Franz Hecker School ) and Heckerstrasse in Osnabrück were named after him. The Kreissparkasse Bersenbrück has been offering a "Franz Hecker grant" every two years since 2004, which is intended to promote young artists.

The listed Villa Hecker has been the seat of the Bohnenkamp Foundation since 2013, which promotes the artist's memory. Since 2016, the Egerland Foundation has been promoting the project “Home and Foreigners - in the footsteps of Franz Hecker”, which is aimed particularly at young participants with a migration background.