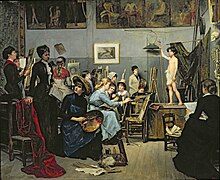 The studio of the Académie Julian student Marie Bashkirtseff , 1881

The Académie Julian was a prestigious private art academy founded in 1868 by the painter Rodolphe Julian (1839–1907) at number 27 of the Montmartre Gallery (now Passage des Panoramas) in the 2nd arrondissement of Paris . Over the years it had several studios in Paris and existed until the beginning of the Second World War . From the year it was founded until 1939, this art school made it possible for thousands of painters and sculptors  - sometimes in classes that were separated according to sex - to receive artistic training.

Their two workshops, founded in 1890 on rue du Dragon in the 6th arrondissement , were taken over by Atelier Penninghen, named after one of its teachers and founders, in 1959, which has been known as École supérieure d'arts graphiques , ESAG Penninghen for short , since 1968 . However, the vernacular still calls the school Académie Julian, which is still listed in the telephone directory under this name. The name Julian, which has now become a brand name, still adorns the school entrance at 31, rue du Dragon, in large letters.

Among the numerous private art academies in Paris at the end of the 19th century that competed for the official École des Beaux-Arts , the Académie Julian was the most famous. Above all, it was best known among foreign artists and was therefore the epitome of private Parisian art education, especially outside France.

The massive popularity that these and other private art schools experienced in Paris in the 19th century was due, among other things, to the fact that the École des Beaux-Arts tried to refuse foreign students admission by taking a very difficult French examination - which was the pretext The reason given was that foreigners were not to be favored by the advantages of this state institution financed by French taxpayers' money - and on the other hand, until 1897, no women were allowed. Apart from that, the maximum age of 30 years was another obstacle to admission to the École des Beaux-Arts.

The academy, which accepted art students regardless of their origin, gender and age, was popular with both French and foreign students, especially since it was open to aspiring and experienced professional painters as well as ambitious amateur artists. The Americans were particularly numerous, with a large contingent made up of English, Hungarians, Poles, Russians, Scandinavians, Austrians, Swiss and, last but not least, the Germans. 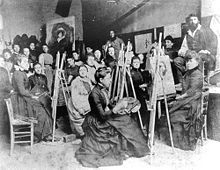 Women's studio of the Académie Julian, 1889

At the "Julian", women could take the same courses in art as men and were also admitted to the classes of nude painting based on the living nude model, which at that time - especially for the Académie des Beaux-Arts - was an unheard of affront . Since the French audience in particular was more reserved about the mixed classes, the Académie Julian also opened separate women's classes in rue Vivienne and thus found a gap in the market.

In the years from 1878 to 1896, further studios were set up on both the Rive Gauche and the Rive Droite , and the art school expanded across the city.

The academy, which mediated between tradition and avant-garde , owed its fame not to the number of its students or studios, but to the high reputation of its teachers, who for the most part came from the establishment of the École des Beaux-Arts and had a corresponding influence in the Parisian art world decreed. For example, these teachers were able to have their students run for the Prix ​​de Rome and, by being on the jury of the Paris Salon , help them to show their works in this much-visited exhibition. The teachers at the Académie Julian included William Adolphe Bouguereau and Tony Robert-Fleury, among others, the Laurens brothers .

The academy clearly expressed its market leadership with its own magazine, L'Académie Julian .

The student body, which was hierarchized according to age groups and merits , similar to the École des Beaux-Arts , was headed by a massier (chairman) elected from their ranks , or a massière in the women's classes , whose task was to balance students, administration and teaching staff to convey. The massage therapist performed a wide variety of tasks, including the selection of models, which was made on Mondays for the whole week. Corrections were made once or twice a week.

Around 1888/89 the post-impressionist artist group Nabis was founded at the "Julian".

After the Académie Julian was closed at the beginning of the Second World War, the studios on rue du Dragon were sold in 1946. In 1959 they came into the possession of the painter and ceramicist Guillaume Met de Penninghen and his partner Jacques d'Andon, who had already set up studios in 1953 in rue Falguière near Montparnasse to prepare for the exams of the renowned schools of applied arts . Since then, this facility, renamed ESAG Penninghen in 1968, has been using the former premises of the Académie Julian.