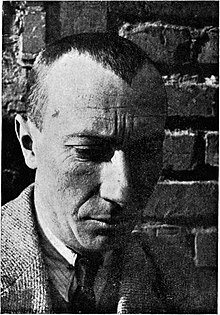 He moved in the artistic circles of the Constructivists and the Parisian Surrealists , and in 1916 he co-founded Dadaism as a literary and artistic movement in response to the First World War and against its social conventions in Zurich. Arp worked particularly closely with his wife Sophie Taeuber-Arp and at times with other artists such as the constructivist El Lissitzky , Max Ernst and Kurt Schwitters . In 1930 he became a member of the group Cercle et Carré and a year later co-founder of the new abstract Parisian artist group Abstraction-Création .

Arp's oeuvre is shaped by the Dadaist principle of chance and, from the 1920s, by an "object language" of the everyday. Particularly characteristic is his engagement with "biomorphic", natural, rounded forms that make his work unmistakable to this day.

Hans Arp comes from his father's side of a Huguenot family from the Holstein provost and the mother of an Alsatian -französischen family. His father Jürgen Peter Wilhelm Arp, born in Kiel in 1853 , moved in 1877 to Strasbourg, which was then part of the German Empire , where he married Marie Joséphine Koeberlé in 1880. "Joe", the daughter of a master upholsterer from Oberschäffolsheim , was born in Strasbourg in 1857; her maternal family comes from Tournus in Burgundy . Hans's father owned a prosperous cigar factory - Hans got to know the round shapes in the form of billows of smoke that are highly characteristic of his art at an early age. His mother was a talented pianist and singer. Hans and his brother Wilhelm Franz Philipp, called Willie, born in 1891, grew up trilingual; they spoke French with their mother, German with their father and at school, Alsatian in everyday life outside of home and outside of school , although the Alsatian accent also rubbed off on the other two languages. In his youth, Hans was particularly interested in German Romantic poets such as Novalis , Clemens Brentano and Ludwig Tieck, as well as French poets such as Arthur Rimbaud and Comte de Lautréamont . 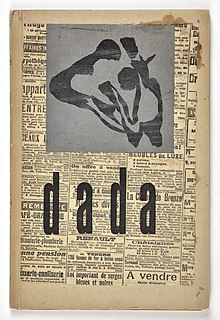 From 1904 to 1908 Arp studied fine arts at the Art School Weimar and at the Académie Julian in Paris, which he left disappointed because of their conventional teaching methods. From 1909 he lived in the Swiss canton of Lucerne , as his father had moved his factory to nearby Weggis in 1907 . In 1911 he became a co-founder of the artists' association Moderner Bund . He got to know Wassily Kandinsky and through him made contact with the group Der Blaue Reiter .

In 1915, Arp's abstract works were first exhibited in Zurich . In 1916 he illustrated Tristan Tzara's volume of poetry 25 poems . Through Tzara, he met Hugo Ball , Emmy Hennings , Marcel Janco and Richard Huelsenbeck , with whom he founded Dadaism in Zurich in 1916 . From 1916 he was friends with the artist and textile designer Sophie Taeuber . They began to share and work together on the renewal of art. Arp introduced Taeuber to the circle of Dadaists, in whose events she took an active part. In 1919 Hans Arp moved to Cologne and made friends with Max Ernst and Johannes Theodor Baargeld . With these he founded Dadaism in Cologne; they jointly published the Marxist-oriented magazine Der Ventilator . In 1920 Arp took part in the First International Dada Fair in the Otto Burchard Gallery in Berlin and, on the mediation of Kurt Schwitters, published the volume of poetry Die Wolkenpump , whose poems Arp referred to as text collages . In them, chance was an essential design principle.

Constellation According to the Laws of Chance , aluminum sculpture by Hans Arp, ca.1930, Tate Modern , London

In 1922 Arp married Sophie Taeuber . Individually and together they created many works. In 1923 Arp began working closely with Schwitters. In 1923 Hans Arp took part in a group exhibition of the Surrealists in Paris . In 1925 he rented a studio in Paris, which Sophie Taeuber-Arp sometimes used. The Arps became members of the artist movement Cercle et Carré , later of the successor organization Abstraction-Création . Arp had close contact with international avant-garde artists such as Kasimir Malewitsch and El Lissitzky . Together with Lissitzky, he published the book Die Kunstismen in 1925 .

In 1926 the Arps moved to Strasbourg. They invited the Dutch artist and architect Theo van Doesburg to work on the Aubette project in Strasbourg - it was about the interior decoration of a large pub, café, salon, etc. The Arp couple also had an important influence on the style of the Hard Edge off. The abstract American artist Ellsworth Kelly had visited her very often in Paris and the two had a major impact on his early development of wanting to make impersonal, non-individual art. In the same year the Arps moved to Meudon near Paris, where they took on French citizenship on July 20, 1926. Originally a painter and graphic artist, Arp has increasingly emerged as a sculptor since 1930.

In 1940 Arp's works were classified as degenerate art by the National Socialists . The Arp couple moved to the unoccupied part of France, to Grasse . He now wrote poems mainly in French. He did not have a studio and as a painter and sculptor had to work with lightweight, portable and cheap materials. This is how the dessins aux doigts (finger drawings) and the papiers froissés (crumpled papers) came about . Arps were kept afloat with donations from Maja Sacher , Erika Schlegel and other patrons. At the end of 1942 they fled to Switzerland from the advancing German Wehrmacht .

Sophie Taeuber-Arp died of carbon monoxide poisoning in Max Bill's house in Zurich on the night of January 13, 1943 . It took Arp years to recover from this loss and dedicated much of his work to Sophie. Together with Georg Schmidt he worked on a monograph on her work. In 1949 Arp traveled to the USA, where thanks to the help of gallery owner Curt Valentin , his art became increasingly successful. Since the majority of his buyers now lived there, Arp considered whether he should emigrate; but in the end he decided against it.

From 1950 Arp designed several large sculptures for the universities of Harvard and Caracas and the UNESCO building in Paris. In 1952 Arp traveled to Rome and Greece , where he received new ideas for sculptural work ( e.g. Kobra-Centaur), for which he received the International Sculpture Prize at the 1954 Venice Biennale .

The grave of Hans Arp, Sophie Taeuber-Arp and Marguerite Arp-Hagenbach in Locarno

The first comprehensive monograph was dedicated to the now internationally successful artist Arp in 1957. In the same year he became a member of the German Academy for Language and Poetry . In 1958 the Museum of Modern Art in New York held a comprehensive retrospective. Arp was a participant in documenta 1 in 1955, documenta II in 1959 and documenta III in 1964. His art was now so popular that he could employ staff.

In 1959 Hans Arp married his long-time girlfriend Marguerite Hagenbach. He died in Basel in 1966 at the age of 79 . His grave is on the Cimitero di Santa Maria in Selva in Locarno , Canton Ticino . The estate donated by Arp's second wife can be found in the Museo comunale Casa Rusca in Locarno. In addition to works by the artist himself, the estate also includes Arp's private art collection.

As the German art historian Johannes Jahn writes, Arp's works “move in a peculiar world between Dadaism, Surrealism and abstraction. In its sculptural formations, it tries to depict the organic forms that germinate from the inside out. ”The art historian Carola Giedion-Welcker again emphasizes the relevance of that vision of nature in the 1930s and established this in Arp as“ making something invisible visible, the search according to an optical language that is able to grasp the spiritual spheres beyond the world of appearances. ”Arp's“ Biomorphism ”thus found the emblematic code for the spiritual in art in vegetative forms. Juri Steiner explains further: “Arp's three-dimensional concretions in white marble, wood, plaster and bronze relate to the solidification of the mass in stone, in plants, in animals, in people. Coagulation, hardening, thickening, growing together are symbols of the eternal transformation in nature. Arp called the forces of these processes 'tension de sol' or 'soil tension', based on the incessant natural cycles. Arp also kept producing new constellations, drawing the knowledge for his 'moving ovals' not only from observing nature but also from philosophical texts by Lao Tse and Jakob Boehme . From the bipolarization of man and woman - Adam and Eve - Arp, as with Constantin Brancusi, developed the confrontation with the egg as the ultimate symbol of procreation. The intention was to put people back in their traditional place within creation . In doing so, Arp brought the dominant art movements of the interwar period, surrealism and constructivism / neo-plasticism under one roof. "

Before the museum opened, there were heated discussions because some of the objects on display in the museum, which were held by the Hans Arp and Sophie Taeuber-Arp e. V. was disputed whether it was works authorized by Arp himself or later castings and replicas.

The state of Rhineland-Palatinate also accused the association of breach of contract because it had sold some works that were intended for exhibition operations. In summer 2008, the country announced the cooperation.

Arp Museum from the southwest

The house with a rich collection of works by Hans Arp and Sophie Taueber is a foundation by Marguerite Hagenbach from 1976. Over the years, the collection has been expanded by other foundations. Noteworthy is Arp's studio, in which he produced the plasters for the casts to be made. 114 sculptures and 32 reliefs that were confiscated by French customs in 1996 are on display there. After an initial exhibition at the Center Pompidou , this collection has been kept in Clamart since December 2006. The Fondation Arp has a library.

The foundation, based in the former Ronco dei Fiori Hans Arps residential and studio building in Locarno- Solduno, was founded in 1988 by Marguerite Arp-Hagenbach. The Fondazione has been cooperating with the Liner Foundation in Appenzell since 2000 . The aim of the collaboration is to preserve the Fondazione Arp in its current form, regular exhibitions of the works of Arp and Sophie Taeuber in Appenzell and the promotion of their works worldwide. A sculpture garden belongs to the house .

The Hans Arp and Sophie Taeuber-Arp Foundation is currently still organized as an association. She looks after parts of Hans Arp's estate, in particular the rights to bronze sculptures. It was originally based in Remagen- Rolandseck, but moved to Berlin in 2013. In 2012 she published an inventory of all sculptures. This list also answers the question of the legitimacy of posthumous replicas with a casting rights list from 1977, which was signed by Arp's second wife Marguerite Arp-Hagenbach.

The conflicts over the rights to replicate had stopped the international exhibition activities with Arp's works between 2008 and 2015, as the rights to the sculptures were not considered secured.

Edition of the poems