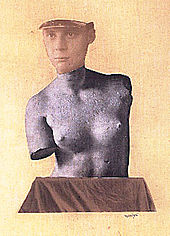 Johannes Theodor Baargeld or Zentrodada (born October 9, 1892 as Alfred Ferdinand Gruenwald in Stettin ; † August 18, 1927 at Mont Blanc ) was a German painter , graphic artist , author and publicist of Dadaism and mountaineer .

Baargeld grew up in Cologne . After graduating from high school, he studied law at Oxford University in 1912/13 and continued his studies in Bonn . In the First World War he served as a reserve lieutenant from 1914 to 1917. In 1917 he began to write lyrical and political texts for Franz Pfemfert's magazine Die Aktion , and the following year he joined the USPD . Alongside Max Ernst, Baargeld was one of the founders of the Cologne Dada group in 1919 . He published the Dada magazine Der Ventilator and a year later, together with Max Ernst, he published die schammade (amateur artists get up!) .

In 1920 he took part in the First International Dada Fair in Berlin , but a little later withdrew completely from the Dada movement in order to take up a degree in economics .

From 1923 he started climbing . He achieved several first ascents in the Alps . Landscape photographs were taken while mountain climbing, some of which the Cologne Museum Ludwig acquired. On August 18, 1927, at the age of 35, he had a fatal accident in a storm in the Mont-Blanc area.

Baargeld was buried in the Melaten cemetery in Cologne (hall 73a). Walter Vitt took over the sponsorship of the grave and had a new one erected according to a design by Wolfgang Nestler in place of the gravestone that was destroyed in the war .