Mountaineer is a redirect to this article. For further meanings, see Bergsteiger (disambiguation) . 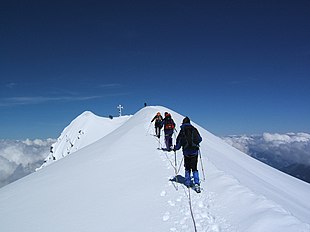 Rope team on the summit ridge of the Großvenediger 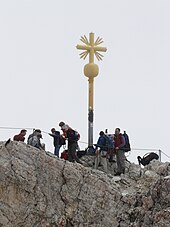 The summit cross of the Zugspitze

The climbing is a form of mountain sports , and includes various activities in rock ( rock climbing , alpine climbing ), corn snow , glaciers and ice ( high tour ), or a combination thereof, to the height of mountain climbing in the oxygen-poor regions of seven- and eight-thousand . Winter mountaineering includes ski tours , snowshoe tours or ice climbing . Mountaineering at great heights or in remote regions is known as expedition mountaineering . As a rule, people whose occupation takes them into the mountains ( hunters , packers ) are not referred to as mountaineers.

In a broader sense, mountaineering is also referred to as alpinism and includes activities such as mountain hiking , alpine hiking and trekking , exploring and cartography of unknown mountain areas , as well as nature conservation and mountain guides .

The high mountains were largely avoided by hikers and travelers until well into the 18th century. There was also no cult that gave mountaineering a religious exaggeration. "Since you had never been forced to go there, you didn't know whether it was even possible" and "climbing a fairly vertical wall is no worse than walking over hot coals" writes Paul Veyne about the history of the Alpinism. The first ascent of Mont Ventoux ( 1912  m ) on April 26, 1336 by Francesco Petrarca , on the other hand, the ascent of Mont Aiguille ( 2085  m ) by a mercenary troop , commanded by Charles VIII , is considered to be the hour of birth of mountaineering . Since these two first ascents found their way into the literature, they became far better known than the successful ascent of the 3538  m high Rocciamelone by Bonifacio Rotario d'Asti in 1358 .

St. Niklaus in the Swiss canton of Valais is considered to be the cradle of professional mountaineering in the second half of the 19th century, where the world's first mountain guide museum was established.

In the past, mountaineering and the associated expeditions were also called mountain trips .

“Alpinism is the art of climbing peaks and walls using your own physical and mental strength. Natural, not artificial, obstacles must be overcome, risks assessed and accepted. It's about personal responsibility, solidarity with others and respect for nature. "

Well-known mountaineers have always achieved their fame through special alpine achievements such as first ascents.