Charles VIII the Friendly or the Courtly ( French Charles VIII l'Affable or le Courtois ; born June 30, 1470 in Amboise Castle ; † April 7, 1498 ibid) was King of France from 1483 to 1498 . He was the third and only surviving son of Louis XI. born of France and his wife Charlotte of Savoy . He was the seventh king of the House of Valois and with his death the main line of Valois ended. 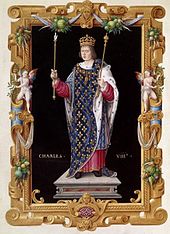 Charles VIII was of a short stature and was therefore often ridiculed. He was considered a weak child and his father was more concerned about his health than about his education in the interests of the continued existence of the dynasty. The Dauphin was to consolidate the position of the House of Valois as an instrument of his marriage policy. As early as 1475, talks between the English King Edward IV and Louis XI took place in Amiens in the run-up to the Treaty of Picquigny . held, at which a marriage between Charles and the English king's daughter Elizabeth of York was agreed. 1477, after the death of Charles the Bold of Burgundy , Ludwig wanted his son to the heiress of the Duchy of Burgundy , Maria married, but refused latter thirteen years older than the Dauphin Charles and thus mature and confident, in favor of this marriage Habsburg Maximilian from .

Louis XI, who saw his end coming, tried to introduce his son into the affairs of government from 1482 and advised him to keep his court together to ensure a smooth transition.

After his father's death in 1483, the Dauphin Karl ascended the throne as Charles VIII at the age of thirteen, whereupon a violent dispute broke out between his sister Anna von Beaujeu and Louis d'Orléans over guardianship and regency . After the decision of the General Assembly of 1484, Charles Conseil was ultimately under the decisive influence of his sister Anne, who was ten years older than him, and her husband Pierre II. De Bourbon until around 1491 . During this time, state affairs were essentially carried out by the future Cardinal Guillaume Briçonnet .

One month before his accession to the throne, on July 22, 1483, the Dauphin Karl was symbolically married to the three-year-old Margaret , daughter of the marriage of Maximilian I of Habsburg (who later became Emperor of the Holy Roman Empire ) to Mary of Burgundy. This marriage was - in violation of the Treaty of Picquigny - part of the Peace of Arras and was negotiated in 1482 between France, Austria and the Burgundian Netherlands . The aim was to reconcile the so-called Burgundian question , which had been raging from war since 1477 , since the House of Austria claimed high and old Burgundy from the inheritance of Charles the Bold, but the crown of France had confiscated the crown fief and some Flemish possessions.

Against Louis d'Orléans, the so-called “crazy war” (→ Guerre folle ) was to be fought against the Bretons in 1488, after the resigned Prince von Geblüt sided with the prince opposition around Francis II of Brittany and with the Breton independence. The attempt to win his eleven-year-old daughter Anne after the death of the Duke of Brittany and to bind Brittany to the crown through marriage initially failed: Anne sought her salvation in a marriage to Maximilian of Austria, although the so-called glove marriage was not carried out either. Charles VIII thwarted this marriage policy militarily during the siege of Nantes and forced the now fourteen-year-old duchess to a new marriage, which on December 6, 1491 was Langeais Castle . Maximilian did not have the means to rush to the aid of the Duchy of Brittany and finally had to accept that his marriage contract with Anne was revoked and annulled by Innocent VIII . After this so-called “Breton bridal robbery”, Brittany came to the French crown definitely and was additionally bound by the marriage contract, in that Anne had to marry the heir to the throne Charles VIII in the event that she did not give birth to a surviving Dauphin.

Archduchess Margarete, who had lived at the court of France as the king's fiancée after the Peace of Arras (1483) (there had only been a symbolic wedding), was not allowed to return to Germany immediately. Only in 1493, when the Treaty of Senlis brought an interim peace on the Burgundian question, was she - now thirteen years old and brought up entirely in the spirit of French court culture - sent back with her trousseau.

In 1489 Charles VIII was asked by Pope Innocent VIII, who had fallen out with Ferdinand I of Naples , to take Naples . Legal claims could be constructed by resorting to Charles of Anjou , the conqueror of Naples from 1265/1266. Furthermore, Louis XI. 1483 claimed the inheritance of the younger French Anjou, even before René II of Lorraine, a last independent pretender, had threatened Naples apart from the crown of France. Ferdinand, for his part, was threatened by the split in Naples into an Angevin and an Aragonese noble party after decades or even centuries of wars of succession, but most recently a war against the aristocratic opposition of 1485/86 (→ War of the Barons ) had shaped his empire.

The young and ambitious king prepared his army and reinforced his artillery with the most modern siege equipment of the time. In order to keep his back free for his plans of conquest, he concluded contracts with his neighbors that were bought at a high price. In 1492 the Treaty of Étaples came about with Henry VII of England , in 1493 the Treaty of Senlis with Maximilian I and in the same year the Treaty of Barcelona with Ferdinand II of Aragón . The Milanese usurper Ludovico Sforza , who was threatened by Ferdinand's successor Alfonso , rushed to meet him from among the Italians . Because the Italians after the election of Pope Alexander VI. had fallen out completely in the conclave of 1492, Lodovico Sforza feared the demand for the end of his reign, as it had been made by Ferdinand of Naples and Don Alfonso. Another goal was the usurpation of the rule of his nephew Gian Galeazzo Sforza , who in turn was linked to Isabella of Aragón , the daughter of Alfonso. Accordingly, he allied himself with Charles VIII in the spring of 1493 and invited him to a train against Naples.

Coat of arms of Charles VIII, King of France, Naples and Jerusalem
(With the Crown of Naples he also became Titular King of Jerusalem.)

In 1494 Charles invaded Italy with 25,000 men (including 8,000 Swiss mercenaries ) , marched across the peninsula and, as it were, subjugated the Republic of Florence in passing. On September 8, 1494, his army, led by Louis von Orléans, stormed the city of Rapallo and slaughtered all the men, women and children. The massacre was in retaliation for Rapallo's attempt to stop the troops on their march to Naples with the help of 5,000 Aragonese soldiers who had landed in the port of Genoa three days earlier . On December 31, 1494, Swiss mercenaries entered Rome through the Porta Santa Maria del Popolo . On February 22nd, 1495 he took Naples without having to face an open battle. Alfonso was expelled and Charles installed as King of Naples.

The Naples train in the autumn of 1494 ushered in the Italian Wars of the early modern period . Certain circles in Florence welcomed the presence of the French, especially the Dominican Girolamo Savonarola , who saw in Charles a tool of God to cleanse the city of rampant corruption. Many princes of Italy were, however, whether the ease of conquest alarmed the French king, in the Papal States was now Alexander VI. followed Pope Innocent VIII, and even Charles' ally Ludovico Sforza now began to waver. In 1495 the Pope arranged the so-called Holy League of Venice , which prevailed against Charles in the battle of Fornovo ; this although the league had more dead soldiers to complain about than the French army had to accept losses. In addition, the French lost all of the spoils they had made during the Italian campaign. Troubled militarily and increasingly isolated politically, Karl withdrew to his homeland - avoiding further battles. His garrison , which had been left behind in Naples, was quickly forced to surrender by the troops of Ferdinand II of Aragon, who was allied with Alfonso II.

Over the next few years Karl tried to rebuild his army to resume the Italian campaign, but the debts accumulated in 1494/95 were too heavy. So his engagement in Italy was unsuccessful.

Charles VIII died at the age of 27 on April 7, 1498 in an accident at Amboise Castle . When he set out to attend a game of Jeu de Paume , his forehead struck a stone door lintel so unhappily and violently that he fell into a coma and died a few hours later of an onset of cerebral hemorrhage . Like most French kings, he was buried in the Cathedral of Saint-Denis . His heart was transferred to the Notre-Dame de Cléry , where his parents are buried. When the royal tombs of Saint-Denis were sacked during the French Revolution , his grave was opened and looted on October 17, 1793, and his remains were buried in a mass grave outside the church.

Since all of his descendants died in early childhood, the older tribe of the Valois family died out with him. His successor was his 3rd degree uncle Ludwig XII. , a great-grandson of Charles V

Karl-Roland was the only offspring who was older than a few weeks. The loss of the firstborn to a measles infection in 1495 hit the parents hard, so that there was long concern for the queen's health.

Description : Three golden lilies and a golden crutch cross or Jerusalem cross angled with a common cross in the blue and silver emblem . A golden crown of lilies on the shield ; Shield holders are two gold-winged angels dressed in white . The chain of the Ordre de Saint-Michel with the Archangel Michael in a medallion is placed around the coat of arms .