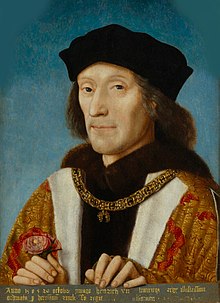 Signature of Henry VII of England

He was the last King of England to take the throne on the battlefield after defeating Richard III at the Battle of Bosworth . had defeated. His marriage to Elizabeth of York ended the so-called War of the Roses , which had been fought for decades between the rival Houses of Lancaster and York . His reign was initially plagued by rebellions and several pretenders to the throne , which he successfully suppressed. His second son, Henry VIII, succeeded him on the throne.

Heinrich Tudor was the posthumous son of Edmund Tudor, 1st Earl of Richmond , a half-brother of King Henry VI. His mother was Margaret Beaufort , a descendant of King Edward III. who was not yet 14 when he was born. He inherited the title of Earl of Richmond from his father and a controversial claim to the English throne from his mother. Because of the feud with the House of York , the family fled to Brittany. As a possible contender for the English throne, he was a thorn in the side of the supporters of the Yorks.

After the revolt failed under his cousin, the Duke of Buckingham , Henry VII became head of the House of Lancaster and a contender for the English throne. With the help of in-laws of the former King Edward IV , a member of the House of York, he landed with an army in Wales and invaded England , supported by his uncle, Jasper Tudor , who had great military experience. Wales has traditionally been a stronghold of the House of Lancaster and Henry owed the support to his ancestors, who were descended on his father's side from Lord Rhys , a popular Welsh ruler. He gathered an army of about 5,000 soldiers and moved north.

There it succeeded his troops, the army of the house York under Richard III. decisive in the battle of Bosworth in 1485. This victory also ended the decades-long Wars of the Roses between the Houses of York and Lancaster. Heinrich's claims to the throne were very vague and based on illegitimate descent. However, this did not prove to be an obstacle to the accession to the throne, because without a law regulating the succession to the throne, Parliament could offer the crown to anyone. As today, when there was no successor law, the Council of Thrones de facto awarded the crown. Heinrich, however, had won it through the right of conquest.

Henry VII of England with the red Lancaster rose

Heinrich saw it as the most important task to strengthen his power as a monarch and to secure his supreme authority. Only a few nobles who could lay claim to the crown were still alive after the Wars of the Roses. Possible pretenders like Perkin Warbeck , who were supported by dissatisfied nobles, were a thorn in his side. Heinrich secured his power through substantial donations of money to the nobles, but mainly he split the aristocratic class and thus ensured their disempowerment.

The ruler was crowned on October 30, 1485 in London. In November 1485, Heinrich had the dubious question of the title of king clarified by parliament, which subtle found that this was the correct king of England because he was on the throne. At the same time the justification of Richard III. As a legitimate king, the declaration of Titulus Regius of 1484 was declared invalid, which also paved the way for Henry's later dynastic connection with the House of York. In addition, Richard III. and declared 28 of his main supporters high traitors , since the beginning of Henry's reign was dated back to the eve of Bosworth, thus turning the royal army into a band of rebels. He took Richard III's heir, John de la Pole, 1st Earl of Lincoln , from it. Two years later, he had to regret his forbearance when Lincoln rebelled and tried to put a possible pretender, Lambert Simnel , on the throne in Heinrich's place. Lincoln was killed at the Battle of Stoke , but Simnel was spared and became a page at the royal court.

Another method used by Henry was the promise to marry Elizabeth of York , daughter and heiress of King Edward IV; this led to the unification of both warring houses. 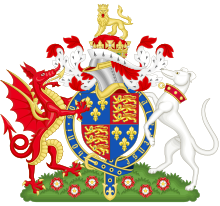 Henry VII's coat of arms from the House of Tudor

As a monarch, Heinrich handled his finances wisely and restored the state's solvency through a finely tuned tax system. He was supported in this by his chancellor, Archbishop John Morton , who mainly forced the nobles to pay sufficient taxes. In addition to the royal government, he placed the Privy Council , which was supposed to keep the nobles in check.

Heinrich's policy was aimed at both peacekeeping and economic prosperity. He succeeded in both. He was an untalented military leader and therefore did not try to recapture the territories lost to France during the reign of his predecessors. Instead, he signed a peace treaty with France that filled England's purse again. To improve England's economic position, he subsidized shipbuilding, so that a powerful navy and a large merchant fleet were created at the same time. When he died his personal fortune was over a million and a half pounds; his son succeeded in destroying all capital from it in a short time.

In order to be on par with France, Henry made a pact with Spain by marrying his son Arthur Tudor with Catherine of Aragon ; he allied himself with Scotland through the marriage of his daughter Margaret to King James IV ; eventually he formed an alliance with the Holy Roman Empire under Maximilian I.

Two strokes of fate in quick succession made Heinrich's dynastic plans and his alliance policy difficult. In 1502 his heir, the just married Arthur, fell victim to an epidemic in Ludlow Castle , a few months later Heinrich's wife also died in childbed in 1503. He feared about the agreements that had been made on the occasion of the marriage between his eldest son and Catherine of Aragon. After the Roman canon law , it was not permissible for a man married his brother's widow. Heinrich managed to obtain a dispensation from Pope Julius II for his younger son so that he could marry Katharina after she had stated that the marriage to Arthur had never been consummated; however, he decreed that the marriage could not be concluded before his death.

His eldest daughter Margaret was initially married to Jacob IV , their son Jacob V , whose daughter in turn was Maria Stuart . Through this marriage, Henry hoped to break the Auld Alliance between Scotland and France, but to no avail. Margaret's second husband was Archibald Douglas ; her grandson Henry Stuart, Lord Darnley later married Maria Stuart, their son Jacob VI. has been. He later inherited the throne of England under the name James I after the death of Elizabeth I.

Henry VII died in Richmond Palace in 1509 after a long illness. He is buried in a magnificent tomb in Westminster Abbey with his wife Elizabeth. After his death, his second son, Henry VIII , succeeded him .

Heinrich had seven children with Elizabeth of York , but only four of them survived childhood. The heir to the throne Arthur also died in adolescence:

In contrast to most of the other monarchs of his time, Heinrich does not seem to have had any relations with mistresses. Accordingly, no illegitimate children are known.