This article deals with the French queen from the Wittelsbach family. For the opera of the same name by Pietro Mascagni see Isabeau (Opera) .

Plaster cast of the tomb of Isabeau de Bavière, Queen of France.

Isabeau de Bavière (* probably 1370 in Munich as Elisabeth of Bavaria; † September 30, 1435 in Paris ) was a princess of Bavaria from the house of the Wittelsbach family . On July 17, 1385 she was in Amiens with the also still young French King Charles VI. married and was Queen of France until his death in 1422.

Elisabeth was the daughter of Duke Stephen III. von Bayern-Ingolstadt and his wife Taddea Visconti . Her older brother Ludwig VII (1368–1447) lived with her at the French court for many years before he came to power as Duke of Bavaria-Ingolstadt.

Isabeau's paternal grandparents were Duke Stephan II of Bavaria and Elisabeth of Sicily , daughter of King Friedrich III. of Sicily and his wife Eleanor of Anjou, who in turn was the daughter of Charles II of Naples and his wife Maria Arpad of Hungary. Her maternal grandfather was Bernabò Visconti , Lord of Milan.

Isabeau's young husband had already succeeded his father Charles V on the French throne as a twelve-year-old boy .

Since he was still a minor, his father's three younger brothers exercised power as councilors for him: the dukes Ludwig I of Anjou , Johann von Berry and Philip II of Burgundy . This so-called government of the dukes performed its tasks with moderate success, however, since each of the three rulers was at the same time a powerful territorial prince and above all pursued his own political and economic interests.

In 1388 Charles VI. the Regency Council and took the affairs of government into their own hands. Trying to be a good king to his people, he relied on his father's counselors, but he proved to be erratic, fickle and influenced. The Hundred Years War between England and France, which had started in 1337 and was taking place exclusively on French soil , had just flared up again.

Isabeau largely held back from the political stage during these years and enjoyed life as the French queen. While the people were starving, their penchant for luxury caused considerable resentment.

Conflicts between Orleanists and Bourguignons

In 1392 it was noticed in Charles VI. the first signs of mental disturbance and only a year later he was declared unfit for government . Queen Isabeau was now declared regent, but again had the Regency Council of the three dukes at her side, in which the energetic Philip of Burgundy played the leading role.

At the same time, however, the king's younger brother, Ludwig, Duke of Orléans , also announced his right to participate in power. As a result, two parties formed at the French court around 1400: On the one hand the Orleanists, who supported Ludwig's claim to power, on the other hand the Bourguignons around Duke Philip. There was no agreement in this dispute, so that the conflict reached its preliminary climax with the assassination of the Duke of Orléans in 1407. The mastermind behind the attack was well known: Johann Ohnefurcht , the new Duke of Burgundy. Nevertheless, it was not possible to make him personally liable for this attack, as he could count on a strong ally at his side: the regent Isabeau, who meanwhile with her influence on the mentally ill Charles VI. had come to a high position of power.

Nevertheless, the dispute between the Orleanists and the Bourguignons was far from settled by the murder, since the son of the murdered Duke, Charles of Orléans , continued his father's claim to the throne. Led by the strong influence of Count Bernard of Armagnac , the Orleanist party soon renamed itself to Armagnacs , so that the loyalty between the houses of Orléans and Armagnac was clearly underlined.

As early as 1410, an open civil war between the Armagnacs and Bourguignons was raging across the country , and in 1413 they were able to turn the tide in their favor.

The entire royal family was taken to Paris and Isabeau was asked to enter a monastery. There she should reflect on her blasphemous life, marked by moral excesses and gluttony. But Isabeau persistently refused to eke out her life as a nun, so that she was placed under strict arrest in Paris. So she was no longer able to rely on her husband Charles VI. continue to exert influence.

In 1415 the English King Henry V (England) declared the peace treaty of Bretigny null and void, because France had not kept its part of the agreement; on the contrary, under Charles V all lands were taken with the sword. Henry V now reclaimed all the provinces for the English crown - a strategically well chosen point in time, as France was enormously weakened by its civil war. In August 1415 the English troops marched into France.

Duke Charles of Orleans gathered all the loyal nobles and knights at his side and led them to meet the English. On October 25, 1415, the armies met at the Battle of Azincourt , but the English succeeded in defeating the numerically larger and far better armed French army. Most of the nobles who had fought for France lost their lives in battle. Others were captured and executed on Henry V's orders.

With this battle, France, which was already weakened, lost a large part of its nobility, who had held important posts, offices and functions in the country. Duke Charles of Orleans escaped with his life, but from now on he was in English captivity and was taken out of the country. Worse still, the Armagnacs' party was deprived of its most important leaders and the House of Burgundy saw the time for another turnaround. Therefore England and Burgundy concluded an alliance pact against France.

Paris, where the royal family and Isabeau were still staying, was initially spared the new fighting. After the eldest sons of the royal family (Ludwig and Johann) died young, in 1417 the youngest male offspring, 11th child and 5th son of the family, who later became Charles VII, received the title of Dauphin , which legally made him heir to the throne Expelled from France. 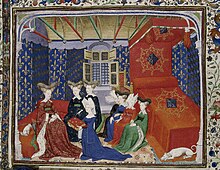 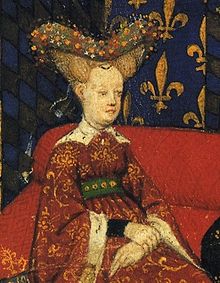 Isabeau, who practiced loyalty with her ally Johann Ohnefurcht, tried to fend off her own son's claim to the throne. The relationship between mother and son was not the best anyway, as the only fourteen-year-old Dauphin reproached her almost every day about her shameless lifestyle. In the end, Charles VII decided to remove his mother from the royal court and transferred her to Tours . However, the strict supervision of her person and the arrest have not been lifted.

In 1418 the Bourguignons invaded the city of Paris and staged a slaughter among the supporters of the Armagnacs. King Charles VI. Although he was spared life and limb, the young Dauphin Charles VII was only able to save himself at the last second by fleeing to Bourges.

Johann without fear freed Isabeau from her arrest and led her back to Paris, with which Charles VI. was again exposed to her fateful influence.

After Johann Ohnefurcht was killed in an assassination attempt in 1419, most likely at the behest of the Dauphin, his son Philip III took over . of Burgundy the duchy. From then on, however, Burgundy no longer strived for the French crown, but rather for an independent Burgundy that could develop freely and independently of France.

In 1420, Isabeau declared that her son, the Dauphin, could in no way ascend to the throne of France because he was not the legitimate son of King Charles VI. be. Since her mentally handicapped husband could not bring charges of adultery and as an ally of the House of Burgundy she had no fear of being prosecuted as an adulteress, she declared her son to have been conceived out of wedlock. With this assertion, she continued the dispute between herself and her son, whom she thus deprived of the official succession to the throne. Even more so, she urged her husband, Charles VI., To sign the Treaty of Troyes .

In this document signed on May 21, 1420 between Charles VI. and Henry V was the English king's claim to the throne of France confirmed and through the marriage to Charles VI. Daughter, Catherine de Valois , legitimized.

But before Henry V could ascend the French throne, he died in 1422 - Charles VI followed him two months later. into the grave. Isabeau, who thus no longer had an ally and also feared the vengeance of the Armagnacs, voluntarily went into exile in Burgundy.

At the end of her life she lived in seclusion in the Hôtel Saint-Paul in Paris, where she died in September 1435. She was buried in the tomb of the French kings, the cathedral of Saint-Denis . When the royal tombs of Saint-Denis were sacked during the French Revolution , their grave was opened and looted on October 17, 1793, and their remains were buried in a mass grave outside the church.