This article covers the noble house. For other meanings see Wittelsbach (disambiguation) . 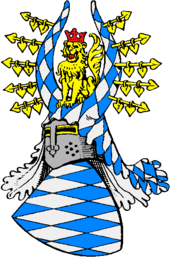 Coat of arms of the Counts of Bogen , from 1242 of the Bavarian dukes from the House of Wittelsbach (around 1300) 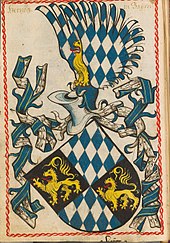 The Wittelsbach house is one of the oldest German noble families . For centuries the Count Palatinate , the later dukes, electors and kings of Bavaria (1180–1918), as well as the Count Palatine of the Rhine (1214–1803 and 1816–1918), who as rulers of the Electoral Palatinate were already Electors of the Holy Roman Empire were.

The exact origin of the Wittelsbach family is unclear. Legends lead them back to Charlemagne or even to ancient Trojans . A more plausible thesis says that the Wittelsbachers came from a sideline of the Luitpoldinger , named after Margrave Luitpold of Bavaria († 907). The theory, which is also most widely observed today by members of the Wittelsbach family and many scientists, is based on the genealogy of Otto Freiherr von Dungern , published in Austria in 1931 , in which the history of the family around the year 1000 with a Count Otto I. von Scheyern ( Otto comes de Skyrum ) begins.

The Luitpoldinger as the origin of the Wittelsbach family

Luitpold's son, Arnulf the Evil , was even elected German (counter) king in 919, but eventually submitted to Heinrich of Saxony and contented himself with the Duchy of Bavaria .

After Arnulf's death in 937, King Otto I granted the duchy to Arnulf's brother Berthold in 938 . Otto I also married his brother Heinrich to Arnulf's daughter Judith and thus established Heinrich's later claim, who after Berthold's death became Duke of Bavaria, disregarding the claims of other Luitpoldingen.

Arnulf's eldest son, Eberhard , had been deposed as duke in 938; the younger, Arnulf (II.) , became Count Palatine in Bavaria, built Scheyern Castle in 940 , and his descendants named themselves Counts of Scheyern after this castle .

The Counts of Scheyern, Count Palatine of Bavaria

The Counts of Scheyern were:

Count Otto IV, Count of Scheyern moved in 1124 the residence of the Palatine from the Castle Scheyern after the Wittelsbach Castle in Aichach (now administrative region of Swabia).

Konrad II. Of Scheyern-Dachau, a son of Count Conrad I of the Dachau line of Wittelsbach, was in 1153 when Konrad I Duke of Meran . He was the first of the Wittelsbach family to receive a ducal office. In 1159 he was followed by his son Konrad II. 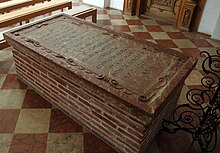 Otto VI. Count Palatine of Bavaria, who had distinguished himself on Frederick I Barbarossa's Italian campaigns, received the Duchy of Bavaria after the deposition of Heinrich the Lion in 1180 , whereupon he called himself Otto I of Wittelsbach, Duke of Bavaria. His son Ludwig I the Kelheimer was enfeoffed in 1214 with the Palatinate Countess near Rhine . Through his marriage in 1204 with Ludmilla, widow of Count Albert III. von Bogen , after the Bogen's ruling line had expired in 1242, the county of Bogen and its white-blue diamond coat of arms went to the Wittelsbach family. His son Otto II was betrothed to the Welfin Agnes, the niece of Emperor Otto IV, daughter of the Count Palatine Heinrich des Langen and thus heiress of the Palatinate, in 1212 at the age of 6 . The golden lion on a black background came to Bavaria as a heraldic animal, probably due to the later marriage, which was certainly concluded before 1224. Both in the Duchy of Bavaria and in the Electoral Palatinate, the Wittelsbachers succeeded the Guelphs as rulers.

A nephew of Otto I, Count Palatine Otto VIII von Wittelsbach , became notorious after the murder of King Philip of Swabia in 1208; he was ostracized and slain in 1209, and the ancestral castle Wittelsbach was destroyed by Duke Ludwig I.

After Otto II's death in 1255, the lines of Lower Bavaria and Upper Bavaria with the Palatinate were established between his sons . Both princes continued to carry the title Duke of Bavaria and Count Palatine of the Rhine.

Two years after Otto's death, the first division of the country took place in 1255 under his sons Ludwig and Heinrich.

In 1305, the Lower Bavarian duke and son of a Hungarian king's daughter Otto III. proclaimed King of Hungary as Bela V. However, within a short time (1307) he was forced to hand over this crown to the Hungarian prince Ladislaus Apor .

With the deaths of Stephen I and Otto III in quick succession. their sons were still immature, so that their guardianship was claimed by various rulers. These included the Upper Bavarian Duke Ludwig IV of Bavaria and the Austrian Habsburgs. However, they were defeated in the battle of Gammelsdorf by Ludwig IV. The Bavarian, so that he took over the guardianship.

From the heirs Heinrich XIV ruled from Landshut over Straubing, Schärding and Pfarrkirchen, Otto IV from Burghausen over Ötting, Traunstein, Reichenhall and Rosenheim, Heinrich XV. but from the Natternberg near Deggendorf via Deggendorf, Landau, Dingolfing and Vilshofen. After the brothers all died between 1333 and 1339, the eleven-year-old son of Heinrich XIV, Johann I, took over the rule, but also died in December 1340. Lower Bavaria fell to Ludwig the Bavarian and was united with Upper Bavaria.

With the house contract of Pavia in 1329, the Upper Bavarian line was divided into the older Palatinate line and the younger Bavaria .

The (Upper) Bavarian line ascended twice, with Ludwig IV. The Bavarian (1314-1346) and Charles VII. (1742-1745), the imperial throne , obtained the electoral dignity in 1623 under Maximilian I , but expired in 1777 with Maximilian Joseph . It was inherited by the Palatinate line, which once provided the German king with Ruprecht von der Pfalz. 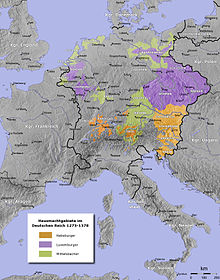 Wittelsbach territories (green) in the Holy Roman Empire , mid-14th century; In 1363 Tyrol fell to the Habsburgs, and in 1373 Brandenburg was also lost to the Wittelsbachers. The Dutch counties acquired Burgundy in 1433.
→ Main article : Duchy of Upper Bavaria

In 1392 the three sons of Stephen II, who previously ruled together, were again divided into Bavaria-Munich , Bavaria-Landshut and Bavaria-Ingolstadt

On February 25, 1623, Duke Maximilian I of Bavaria received the Palatinate electoral dignity.

The Bavarian line of the Wittelsbach family died out in 1777. It was followed by Karl Theodor on the Pfalz-Sulzbach line , which already ruled over the Electoral Palatinate . After the death of Karl Theodor in 1799, the dukes of Zweibrücken received the electoral dignity.

From 1583 to 1761, the Bavarian princes of Wittelsbach occupied the Cologne Erzstuhl and numerous other dioceses.

From 1581 to 1763, Wittelsbach princes from the curbs occupied the chair of the duchy of Liège almost continuously .

The first Count Palatine of the again independent Palatinate was Rudolf I in 1317 he renounced it in favor of his brother Emperor Ludwig IV. His son Rudolf II came back in 1329 in possession of the paternal hereditary lands. With the Golden Bull of Emperor Karl IV., The Count Palatinate near Rhine received the electoral dignity from Charles IV in 1356 .

The Palatinate line of the Wittelsbach family received the electoral dignity under Ruprecht I in 1356. In the same year, in execution of the legacy of his brother and predecessor Rudolf II , he donated the Liebfrauenstift Neustadt an der Weinstrasse , as a memorial of his house. Here he and his brother Rudolf II and 3 Palatine rulers were buried. There were anniversaries to be celebrated there for a total of 13 Wittelsbach princes and their wives. In 1386, Elector Ruprecht I founded Heidelberg , the third German university .

Ruprecht III. von der Pfalz was elected Roman king (1400–1410) by the Rhenish electors , but only recognized in part of the empire.

The line Pfalz-Neumarkt provided with Christoph III. 1440–1448 the king of Denmark, Sweden and Norway. The Heidelberg line died out in 1559 with Ottheinrich , followed by the reformed Pfalz-Simmern line.

Elector Friedrich V of the Palatinate was elected King of Bohemia in 1619. After losing the battle on White Mountain , he fled to Holland. The Palatinate cure was transferred to Bavaria in 1623. In 1648 two new cures were created, one of which was given to the Palatinate.

In 1623 the Palatinate lost its electoral dignity to the Bavarian Duke Maximilian I , who had expelled Friedrich V from Bohemia. With the Peace of Westphalia , an eighth cure was created for the restituted Electoral Palatinate. The Palatinate-Simmern Calvinist line only ruled there until the death of Charles II in 1685.

After the death of King Rupprecht in 1410, the Simmern-Zweibrücken line was created, which split into the Simmern-Sponheim and Zweibrücken-Veldenz line in 1444.

Through the Pfalz-Zweibrücken- Kleeburg line, the Palatinate Wittelsbachers had again from 1654 to 1720 - after Christoph III. (1440–1448) - holds the Swedish throne.

As a result of the Treaty of Xanten, from 1614 the line from Pfalz-Neuburg also held the duchies of Jülich and Berg , which were combined to form Jülich-Berg and were ruled from Düsseldorf .

The last Duke of Zweibrücken was Maximilian Joseph, Duke without a Land, in 1795. The French revolutionary troops had occupied the duchy at this time. In 1799 he succeeded Karl Theodor as elector in Munich.

The Bavarian Crown Insignia (in the treasury of the Munich Residence ) 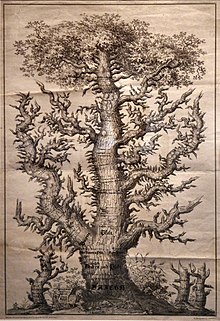 Trunk oak of the regent house of Bavaria, the oak symbolizes the takeover of power by the Palatinate line of the Wittelsbach dynasty as well as the extinction of all other branches of the family, lithograph around 1825

After the Pfalz-Sulzbach line died out in 1799, Maximilian IV (Pfalz-Zweibrücken-Birkenfeld-Bischweiler) succeeded Karl Theodor. In 1806 he became King of Bavaria , thus establishing the line of kings that ruled in the November Revolution of 1918 until it was deposed just before the end of the First World War . The royal line includes:

The house order of the Wittelsbacher is the order of George founded in the 12th century and restored in 1729 .

The royal residential palace in Athens, built by Friedrich von Gärtner for Otto I until 1841 (today the Greek Parliament )

Due to the descent from the Byzantine House of Komnenos and the House of Laskaris , the Greek National Assembly appointed the House of Wittelsbach to the throne of liberated Greece.

Heads of the House of Wittelsbach (after 1918)

After the deposition of Ludwig III. During the November Revolution of 1918, he temporarily emigrated abroad with his family. In the Anifer Declaration, the king released the officials from their oaths of office on him. On the other hand, neither he nor later Wittelsbachers ever renounced the throne.

In the course of the division of state and household assets, the Wittelsbach Compensation Fund was set up by a compromise in 1923 and the Wittelsbach State Foundation for Art and Science was established by the former Crown Prince Rupprecht of Bavaria . The Wittelsbach State Foundation received the art treasures acquired by the Wittelsbach family before 1804 and has since been the owner, if not the administrator, of a large part of the holdings of the Munich museums, while more recent art collections came into the possession of the compensation fund. In 1923, some properties from the Wittelsbachers' former household property - Fideikommiss - were brought into the compensation fund , including the Berg castles , Hohenschwangau (including the Museum of the Bavarian Kings established in 2011 ), Berchtesgaden and Grünau .

Wittelsbach's private assets include the castles Tegernsee , Wildenwart , Leutstetten and Kaltenberg as well as agriculture and forestry with an area of ​​12,500 hectares, real estate and industrial shares .

Duke in Bavaria was since 1799 the title of the branch Pfalz-Zweibrücken -Birkenfeld-Gelnhausen of the Bavarian-Palatinate ruling house of the Wittelsbacher, beginning with Wilhelm in Bavaria . Her descendants were Elisabeth (Sisi), wife of Emperor Franz Joseph of Austria-Hungary. The surname Herzog has currently lived on in Bavaria since Ludwig Wilhelm Herzog adopted his great-nephew Max Emanuel Prince of Bavaria in Bavaria on March 18, 1965 .

Some of the most important Bavarian castles, which were built by Wittelsbach rulers or served as the seats of ruling lines, were:

The most important seats of the Palatinate Wittelsbachers were:

From 1597 to 1794, Bonn was the residence of the Electorate of Cologne , whose electors and archbishops came from the Bavarian line of the House of Wittelsbach from 1583 to 1761.