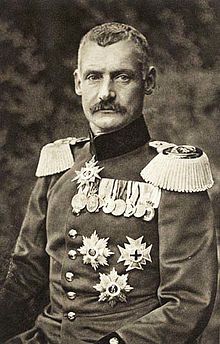 Rupprecht of Bavaria (* 18th May 1869 in Munich , † 2. August 1955 in Castle Leutstetten in Starnberg ) was the last Bavarian crown prince and commander in the German army in the First World War . His full title until 1918 was His Royal Highness Rupprecht Maria Luitpold Ferdinand Crown Prince of Bavaria, Duke of Bavaria, Franconia and in Swabia, Count Palatine of the Rhine .

Rupprecht as a child (portrait of Franz von Lenbach , circa 1874)

Rupprecht was the eldest son of Ludwig III. , the last King of Bavaria, and Maria Theresa Archduchess of Austria-Este, niece of Franz V , Duke of Modena .

At the age of seven, Rupprecht came into the care of Baron Rolf Kreusser, who took over his training and education. He spent a large part of his youth at Leutstetten Castle near Starnberg and in the family villa in Lindau on Lake Constance . There he developed a great interest in sports. As the first prince from a royal family , he attended a public high school, the Maximiliansgymnasium in Schwabing near Munich. In addition to his studies at the Maximiliansgymnasium and his training in riding and dancing, he was also obliged to learn a trade. His choice fell on the carpenter .

In 1902/03 he went on a trip to East Asia , studied the military constitutions there and devoted himself to a critical examination of East Asian cultures. Rupprecht's travel memoirs first appeared in 1906 and in a revised form in 1923.

Numerous trips to Italy made him a connoisseur of Renaissance painting and established his private art collection. The Bavarian Academy of Sciences made him an honorary member in 1911.

Military career and troop leader in the First World War

In the summer of 1886 Rupprecht became a lieutenant and served in the 3rd field artillery regiment "Prince Leopold" in Grafenwoehr. On April 6, 1896, he became a major and on June 20, as a lieutenant colonel , he took over the leadership of the Bavarian infantry body regiment . On October 28, 1899 he became a colonel and took command of the 2nd Infantry Regiment "Crown Prince" . On October 7, 1900, Rupprecht was promoted to major general and took over the 7th Bavarian Infantry Brigade in Bamberg on October 10 . On June 11, 1903, he reached the rank of lieutenant general . On January 27, 1904, he took over the 1st Royal Bavarian Infantry Division , and on April 19, 1906, after being promoted to General of the Infantry , Rupprecht also became the commander of the 1st Army Corps in Munich. On February 4, 1913, he was appointed Colonel General , and on March 27, he received the IV Army Inspectorate as the successor to his uncle Leopold .

Propaganda postcard - Crown Prince Rupprecht as the " winner of Metz "

When the First World War broke out , on August 2, 1914, he took over command of the German 6th Army , which was deployed on the Western Front in Lorraine . In order to prepare for a major German attack near Metz , Rupprecht's army initially carried out a tactical retreat in the Battle of Lorraine on Moltke's orders. But on August 20, 1914, Rupprecht began a counter-offensive between Saarburg and Mörchingen without orders. The 6th Army was able to push the enemy back over the border, but ultimately failed to break through the French lines in the Nancy / Epinal area . Rupprecht remained as a troop leader on the northern section of the western front for the rest of the war. The Army High Command was transferred to Arras in the autumn of 1914 . In the spring of 1915 he commanded the 6th Army in the Battle of Neuve-Chapelle and in the Loretto Battle . In October 1915 he received the honorary title winner of Arras and La Bassée after the renewed defense against strong French and English attacks . On August 22, 1915, he was awarded the order Pour le Mérite and on December 20, 1916 with the accompanying oak leaves. On August 1, 1916 he was appointed Bavarian and Prussian Field Marshal General , and on August 28, 1916 he took over command of the newly created Army Group "Crown Prince Rupprecht" , which gave him the unified leadership of the fronts in Picardy, Artois and Flanders up to Channel shelter. In March 1917 Ruprecht straightened the front on the Somme with the Alberich company . Later in the year he was responsible for defending against strong English attacks at Arras and in the Great Battle of Flanders . In March and April 1918 he took part in the spring offensive and had to retreat gradually across the Scheldt to the Ghent-Antwerp position after the Battle of Amiens until the end of the war. After the failed offensive, Rupprecht urged the Bavarian government and his father to initiate a peace initiative in August and turned against Chancellor Georg von Hertling in September , who reacted slowly.

After the fall of the monarchy in Bavaria

With the November Revolution of 1918, the royal rule of the Wittelsbachers in Bavaria ended on November 8th , and Rupprecht lost his entitlement to the throne. The news of the revolution reached him in Brussels. Under the name "Alfred Landsberg" he traveled via Amsterdam and Kassel to Berchtesgaden. The Treaty of Versailles provided for Rupprecht to be charged with war crimes as a former army commander in France . After the proceedings were transferred to the German Reichsgericht , this came to nothing.

In 1921 his father died in Hungary and Rupprecht became head of the Wittelsbach family. Before the state funeral for the former king, the state government had assured itself that the proclamation of the monarchy was not planned. This acted with the consent of Rupprecht, who only wanted to assert his rights in a legal way. From then on, Rupprecht lived in Berchtesgaden Castle and the Leuchtenberg Palace in Munich , and later lived with his family in Leutstetten Castle.

In a memorandum distributed by him in 1923, Rupprecht made the minimum requirement to expel the so-called Eastern Jews , since "these elements are said to have had a poisonous effect". This happened in the course of a cross-border anti-Semitic campaign that led to mass expulsions in Bavaria under Gustav von Kahr .

Since the House of Wittelsbach rose after the revolution compensation claims against the State, the latter finally addressed in 1923 as a compromise, the Foundation Wittelsbach Compensation Fund a. Equipped primarily with real estate and money, this has since served to supply the members of the Wittelsbach family and to maintain the art objects assigned to the fund.

Sarcophagus of the Crown Prince Rupprecht

In the winter of 1932/33, Bavaria's Prime Minister Heinrich Held and the chairman of the ruling Bavarian People's Party, Fritz Schäffer, contacted him with the consent of the SPD in order to appoint him General State Commissioner under Article 64 of the Bavarian Constitution if the NSDAP took over government . Rupprecht was ready, but when Hitler really came to power , he hesitated, as did the Bavarian state government .

Rupprecht was an opponent of National Socialism and kept secret contact with opposition groups, including the Bavarian “ Sperr-Kreis ”. He had to go into exile in Italy in 1939 . There (mostly in Florence ) he stayed during the Second World War . Since 1943 he campaigned among the western allies for a pronounced federalism with the possible restoration of the individual state monarchies.

Theodor Christian Freiherr von Fraunberg , his former adjutant, hid him from the National Socialists in Florence, so that he escaped arrest after the assassination attempt on July 20, 1944 . His wife and children were sent to the concentration camp until the end of the war , first to Dachau , then to Flossenbürg . All members of the family survived.

In 1949, under the impression of a visit to Würzburg , which was still badly damaged by the war , Rupprecht founded the non-profit Kronprinz-Rupprecht-von-Bayern-Stiftung for the reconstruction of Würzburg , which was dedicated to social housing and built affordable rental apartments up until the 1980s . Today Heimathilfe Wohnungsbaugenossenschaft eG manages almost 600 properties in the Würzburg area on behalf of the foundation.

In the last years of his life, Rupprecht mainly devoted himself to his art collection. He was the last Wittelsbacher to be buried in the Theatine Church on August 6, 1955 as part of a state funeral in Munich . It was a funeral with royal honors. Rupprecht was the last living German Field Marshal General of the First World War.

Second husband Rupprecht was from April 7, 1921 (married on Schloss Hohenburg in Lenggries / Bavaria ) to Princess Antonia of Luxembourg and Nassau (1899-1954), daughter of Grand Duke William of Luxembourg and his wife, Infanta Maria Anna of Portugal from Braganza, married. This marriage had six children:

Heinrich Franz Wilhelm (1922–1958) died in Argentina and was buried in the painful chapel of the Andechs monastery church. 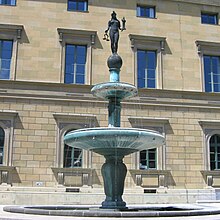 Succession to the throne of the Jacobites

Rupprecht von Bayern was a descendant of the Stuarts . He was therefore regarded by the Jacobites since 1919 after the death of his mother Marie Therese (Mary III) as a pretender to the British throne and by them as Robert I, King of England , of Scotland (as Robert IV), Ireland and France designated. However, he never publicly claimed this title.