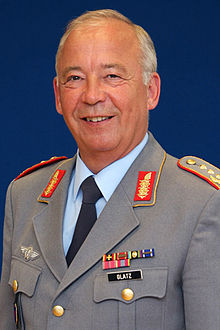 The Lieutenant General is a rank for soldiers of the German Armed Forces and the Federal Armed Forces as well as other modern and earlier armed forces. In some other armed forces such as the Swiss Army , comparable ranks are referred to as corps commander or similar.

The term “Generalleutnant” (also the corresponding, similar or identical English and other language designations) is made up of the terms “ General ” and “ Leutnant ” (the French word origin means roughly “deputy”). The lieutenant general was originally the deputy of the senior general. Indeed, in the 16th and 17th centuries, the highest officer who represented the Roman-German Emperor in peacetime was designated as Lieutenant General . He was endowed with extensive military powers as well as with great political powers . He was therefore often more than “just” a military commander in chief . In the event of war, the lieutenant general was the deputy of the highest commanding officer . In the imperial army of the Holy Roman Empire , this was often the emperor himself, who then carried the title of general as supreme warlord . The war constitution of the German Confederation of 1821/22 still determined the election of a lieutenant general as deputy commander-in-chief. The rank designation Vice Admiral is formed according to a very similar pattern, literally as the deputy admiral in many armed forces, the equivalent of the naval forces to the lieutenant general.

Since the rank insignia of lieutenant-general in many armed forces, including the army , or the armed forces of the United States , often show three star lieutenant general is colloquially often called "three-star general."

See also : Etymology of the designation “General” , “Lieutenant” and section in the article “Ranks of the Bundeswehr” on the (apparent) contradiction of the lieutenant ranked below the major

The rank of Lieutenant General is determined by the order of the Federal President on the rank designations and the uniform of the soldiers on the basis of the Soldiers Act .

In the Federal Armed Forces, the Lieutenant General is an officer rank who, according to the Central Service Regulations (ZDv) A-1420/24 "Ranks and Rank Groups", belongs to the rank group of the generals . Because of this affiliation, soldiers in the rank of lieutenant general can issue orders to soldiers of the rank groups men , non-commissioned officers with and without porters , lieutenants , captains and staff officers on the basis of § 4 ("Superiors relationship based on the rank of rank") of the superiors ordinance within the limits set there .

Like most generals, lieutenant generals generally do not serve as military leaders in the "fighting" troops . Typical uses are in managerial positions as head of department in a ministry or in NATO institutions . The deputy of the inspector general of the Bundeswehr is lieutenant general. In the ministry, the departments (as of April 2015) Personnel , Planning , Strategy and Operations , Armed Forces Command and Equipment, Information Technology and Use are headed by Lieutenant General. In the NATO Military Committee is German Military Representative , a lieutenant general. The particularly required in the use of national departments Operations Command Bundeswehr , central air operations of the Air Force , Air Force troops command and Multinational Operations Command are also of commanders and commanders out in the rank lieutenant general. As inspectors of the army , the air force and the armed forces base, lieutenant generals are directly responsible to the inspector general for the operational readiness of their military organizational area. Your deputies are also lieutenants general; In the Army Command , this is also the “Commander Operation”. In the listed armed forces , the lieutenant general is the highest achievable rank. A few lieutenant generals are used as military leaders in large units. Typical is the use as commanding general of a multinational corps , which today are, however, operational command staffs rather than classic large units. Due to the described and similar positions, soldiers with the rank of lieutenant general can issue orders to all officially or professionally subordinate soldiers in the cases listed in the superior ordinance. As unit leaders, commanders and commanders are the disciplinary superiors of the soldiers subordinate to them in accordance with the military disciplinary code .

The legal basis for the appointment as lieutenant general is set by the Soldier Career Ordinance (SLV) and, in addition, the Central Service Regulations (ZDv) 20/7. In detail, the careers there are only regulated up to the rank of colonel . The appointment as lieutenant general, on the other hand, is essentially a decision to be made by the employer based on the suitability, qualifications and performance of the soldier, which is hardly subject to any further requirements. In practice, only professional officers are usually appointed lieutenant general . According to the Soldier Career Ordinance, the ranks should be passed through regularly in the order described in the order of the Federal President and a minimum period of service in the previous rank of at least one year should be the rule; in practice, a lieutenant general had previously been major general for several years. Most lieutenant generals have regularly completed the general staff / admiralty staff course at the command and control academy of the Bundeswehr .

Lieutenant general are paid B 9 according to the federal salary regulations (BBesO) . According to the personnel budget of Section 14 (2014), 25 posts are provided for soldiers in grade B 9. Five of these belong to the Federal Ministry of Defense and 20 to the armed forces ( subordinate military area ).

The completion of the 62nd year of life was set as a special age limit for Lieutenant General .

The rank badge for Lieutenant General shows golden oak leaves and three golden stars as shoulder badges . The underlay of the shoulder flaps (in the case of army uniforms also the flat braids ) are bright red .

See also : "weapon color"  and collar tabs of the generals

Only army and air force uniforms bear the rank of lieutenant general . Navy uniform wearers (except medical officers ) of the same rank hold the rank of Vice Admiral . The medical officer ranks of the same rank are the ranks of the General Oberstabsarzt or Admiraloberstabsarzt , which differ according to the area in which they are wearing uniforms (first rank designation for army and air force uniforms; last rank designation for naval uniforms). In the armed forces of NATO , the lieutenant general is equivalent to all ranks with the NATO rank code OF-8.

In the sense of ZDv 14/5 and the arrangement of the President of the General Lt. is above the lower rank Maj or Konteradmiral and under the higher-ranking General or Admiral arranged. The medical officer ranks of the same rank as major general are the general staff doctor or the admiral staff doctor . (First rank designation for Army and Air Force uniform wearers; last rank designation for naval uniform wearers.)

The lieutenant general is the second highest rank in the armed forces.

In the Swiss Army , the level of corps commander is comparable to that of the German major general.

In the France of the Ancien Régime , however, the Lieutenant-General was a title, but not a military rank. It was led by several senior officers.

On February 25, 1793, the Lieutenant-général was made a regular rank. It concerned a general de division in his capacity as commander of an army corps. From King Louis XVIII. Abolished again on March 16, 1814, it was reintroduced by Napoleon during the reign of the Hundred Days and lasted until 1848. On February 28 of the same year, he was once again the Général de division, for the commander of an army corps the rank "Général de corps d'armée ”introduced.

In the Red Army of the Soviet Union , the general ranks were reinstated on May 7, 1940. The rank general-leitenant ( Cyrillic : Гнера́л-лейтена́нт ), which is phonetically similar to the German Lieutenant General, replaced the KomDiw . Lieutenant General was the second lowest rank in the group of generals.

In the land and air forces of the National People's Army , as well as in the border troops of the German Democratic Republic , the lieutenant general was a rank from the rank group of the generals. In the People's Navy , the equivalent of Lieutenant General was the Vice Admiral . According to the NATO rank code , the lieutenant general was classified with OF-7 and thus corresponded to the major general of the Bundeswehr.

In the Imperial Army of the Holy Roman Empire, Lieutenant General was at times the highest military rank. The military high command of the Imperial Army was nominally headed by the Kaiser himself. In fact, a Reich Lieutenant General acted as his deputy (= lieutenant), later a Reich Field Marshal . In practice, this could only be appointed jointly by the Emperor and the Reichstag, since a clear determination was never really made. Because of the parity decided at the Reichstag in Augsburg in 1555 , a Catholic and a Protestant Reich Lieutenant General or Reich Field Marshal were appointed.

With the establishment of the Reich in 1871 , the ranks of the Prussian army were transferred to the Reichsheer , which were later taken over by the Reichswehr and Wehrmacht . A typical leadership role for lieutenant general was that of a division commander . According to today's conception, the Lieutenant General of the Wehrmacht is comparable to the Major General of the Bundeswehr in terms of rank .

In the course of the 17th century, the lieutenant general in Prussia developed into a rank under the general and from the end of the 18th century became the commander of a division . Until 1918 he held the title of excellence .