The title of this article is ambiguous. Further meanings are listed under oak leaves (disambiguation) .

The oak is a political and military symbol and a common figure in heraldry that the lobed foliage leaves are native to Central and Southern Europe oak species (also "German Oak" mentioned frequently common oak ) is modeled. The leaves can be shown separated or arranged on a branch. If the symbol only shows a single leaf, the term oak leaf can also be found (especially in heraldry) .

Ancient coin of Epirus. 2. – 1. Century BC Chr. Zeuskopf wears a crown made of oak leaves. The back is lined with oak leaves.

Oak leaves were first used in ancient times as a symbol of sovereign power and loyalty and solidity. In ancient Greek coins from ancient Epirus , the oak leaves are found as a symbolic element, for example as a border decoration of the coins or as the corona of Zeus . Philip II of Macedonia wears a golden wreath of oak leaves and acorns as a sign of his origins and royal sovereignty. This crown is exhibited in the museum at the grave of Philip II near Vergina. This was found in his burial chamber along with his armor and weapons. It must also be mentioned that the oak makes up about 90% of the deciduous forest in this area.

The Corona civica , one of the highest military awards in the Roman Empire, was also made of oak leaves (Latin quercea ).

German oak is a redirect to this article. See also: German oak (disambiguation) . 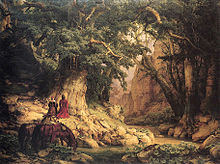 The oak has long been considered a "German" tree. Their hard wood and the characteristic late-falling leaves made them a symbol of immortality and steadfastness. Already in Germanic mythology it apparently played a role in the context of a tree cult , as the history of the Donariche from the 8th century shows. The oak has been a symbol of loyalty, especially since the Romantic era .

With the national romanticism of the 19th century, with the German Revolution of 1848/1849 and the founding of the Empire in 1871, which strengthened the feeling of national unity, the oak leaves entered the German symbolic language. On German program pictures, memorials, wreaths, national emblems and the like, oak leaves are used in a similar form to branches of the laurel bush or the laurel wreath . The German national allegory Germania , a personification of the German nation , was regularly depicted with a corona made of oak leaves.

For this reason, oak leaves are often found on orders, symbols and coins, for example as an extension of the order Pour le Mérite and on the Iron Cross . During the Second World War , there was also the Knight's Cross of the Iron Cross with oak leaves and other extensions (swords, diamonds and finally the - only awarded once - golden oak leaves). Since 1957 it has been a requirement that medals from the time of National Socialism can only be worn without the swastika , which was then mandatory - with a few exceptions . This was therefore replaced by three oak leaves in the Iron Cross and its expansion levels - as with the first Iron Cross from the time of the Wars of Liberation .

In the Bundeswehr you can find the oak leaves in the form of a wreath on various badges ( achievement badges , job badges or the umbrella jumper badge). A double oak leaf with acorn, on the other hand, can be found in the special badge for lone warrior training . The shoulder boards of staff officers and generals also show a wreath of oak leaves (silver for staff officers, gold for generals).

The national emblem on the service caps of the Customs and the Federal Office for Goods Transport consists of an oak leaf wreath and a cockade .

The oak leaves also appeared on the old five DM note and on DM coins (for example on the pennies) and since 2001 it has also been found on the German euro coins at one, two and five cents.

Many orders and decorations of the US armed forces are also worn with bronze, silver or gold oak leaves to indicate that the same order has been awarded several times. A bronze oak leaf stands for another order of the same kind. Furthermore, five bronze oak leaves are replaced by a silver one and five silver ones are replaced by a golden oak leaf. For example, the former General Norman Schwarzkopf, Jr. † was a holder of the Silver Star with double oak leaves.

In many armed forces around the world, including the US Navy , it is a tradition for officers' visors to differ. In the US Navy, for example, officers up to the rank of Lieutenant Commander wear a shiny, black visor, while that of the higher officers ( commanders and captains ) is framed by oak leaves. The peak of an admiral's cap is identified by a double decoration. This decoration is colloquially called scrambled eggs .

In heraldry , oak leaves or the oak leaf are found as a common figure .

Commons : Oak leaves in the heraldry  collection of images