This article explains the municipality of Eichenau. For other meanings see Eichenau (disambiguation) .

Eichenau is a municipality in the Upper Bavarian district of Fürstenfeldbruck .

The distance information describes the straight line to the center of the neighboring town and is commercially rounded to whole kilometers .

The community lies in the transition area between the humid Atlantic and the dry continental climate. Other essential weather-determining factors are the Alps as a Central European and the Danube as a regional weather divide. Due to the low pressure areas that pass through, the weather is relatively changeable in the west wind zone. The foehn brings warm and dry air currents from the south every now and then. This is usually associated with a very good view of the Bavarian Alps.

The settlement of the Starzeltal west of Munich began in 1863 with a blockhouse near today's S-Bahn station. The location on the railway was decisive for the development of the settlement and from the beginning the majority of the residents were commuters with jobs in Munich. With the opening of the Roggenstein stop (at today's “Lehr- und Versuchsgut Roggenstein”) on the Pasing-Buchloe railway line (1905), the prerequisites for greater settlement were given. The Munich book printer and real estate dealer Hieronymus Russ began to buy up the damp meadows in Allinger Moos on a large scale from 1910. In 1912 he had a building plan for a colony of home gardeners approved and began selling land. The first attempt at a "building cooperative Eichenau" by 24 Munich citizens is proven by the resolution of 1913. On January 7, 1907, Prince Regent Luitpold officially gave the settlement its name. At that time there were 48 residents in Eichenau.

After the Starzelbach had been straightened , government councilor Josef Nibler and his district master builder Georg Popp had the first building line plan drawn up in 1915 (legally binding in 1918). In the last weeks of the war, he founded the Eichenau und Umgebung eG building cooperative , which is still active today, together with the Jewish director Julius Einhorn from the Munich household waste disposal in Puchheim, the Fürstenfeldbruck savings bank director and the Fürstenfeldbruck notary . With over 62 hectares, she became the largest landowner in the later municipality and decisively determined the entire development of the town. According to the statutes, the district administrator in the Fürstenfeldbruck district office was the board member of the building cooperative until after the Second World War . After Josef Nibler's death in 1921, the architect and district master builder Georg Popp also moved up to the board of the building cooperative and influenced it until 1933.

Tensions with the mother community of Alling reached their peak in 1925, when the majority of the Eichenau municipal councils decided to move the municipal administration to Eichenau.

After the establishment of a volunteer fire brigade in 1921, the first fire station was built in 1925, and in 1926 the neo-baroque Guardian Angel Church was inaugurated by Cardinal Michael von Faulhaber . In October 1937, today's Friesen-Halle was put into operation as a gym. It was named after Friedrich Friesen .

After 1945 the population increased due to the influx of refugees and displaced persons. On April 1, 1957, Eichenau became an independent municipality by hiving off from Alling . In 1967 the municipal administration moved into the newly built town hall. In 1969 the third school building was inaugurated. The Evangelical Peace Church was built in 1970, the second school complex on Parkstrasse in 1972. In the second half of the 1980s, the sports and leisure center with the Budrio Hall was built. In 2007, two more football fields were added. The " garden city " Eichenau is a place of high quality of living due to the generous green character and the good infrastructure and today largely corresponds to the ideas designed from 1915 onwards.

From 1918 to 1958 the cultivation of peppermint was of great economic importance. The only peppermint museum in Germany still bears witness to this today . From 1972 to 2017 was Eichenau site of the first major distribution warehouse and headquarters of the foundations of ALDI Süd ( Siepmann Family Foundation , Oertl Foundation , formerly Maria Albrecht Foundation and Elisen Foundation ). The warehouse was then occupied by the Transgourmet Germany company . Over 100 companies from a wide range of industries are represented in the three expansion stages of the 14 hectare industrial park in the south of the municipality. Smaller craft businesses in the automotive industry and service providers dominate.

The network operator has been KommEnergie GmbH since April 1, 2008 . It has around 28,200 customers and takes on the planning, expansion and operation of the supply systems, including street lighting, for the three participating municipalities of Eichenau, Puchheim and Gröbenzell . In addition to Bayernwerk AG (formerly E.ON Bayern AG), the municipalities together own 33% of the share capital.

In 1960 the Amperverband was founded. It includes the large district town of Germering, the cities of Olching and Puchheim and the communities of Alling, Eichenau, Gauting, Gilching, Groebenzell, Maisach and Weßling. The wastewater from more than 150,000 inhabitants as well as another 30,000 population equivalents from trade and industry of the association members are collected, diverted and cleaned in the central sewage treatment plant in Olching / Geiselbullach using the latest technology . The headquarters of the association is in Eichenau, but is to be relocated to Olching. He is one of the big local employers.

Reception building of the Eichenau stop

Eichenau is located on the Munich – Lindau railway line and has its own stop on the S4 (formerly S8) line of the Munich Transport Association's S-Bahn network. The regional bus routes 824, 841 and 842 also operate in the village. The connection to Olching is secured with the lines 833 and 834, to Emmering and Fürstenfeldbruck with the line 844. The state road St 2069 runs through the town in a wide arc from the municipality border with Olching in the north to Bundesstraße 2 in the south. It is heavily polluted by commuter traffic and delivery traffic between the many commercial areas in the area. The fastest route to the A 99 is via the Germering connection . The gated level crossing at the intersection between St 2069 and the railway line was replaced by an underpass in 2001.

Sights in and around Eichenau 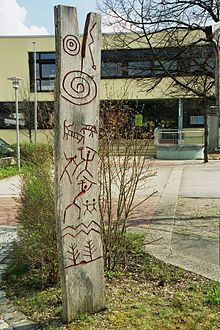 Artwork by Brigitte Storch in front of the Starzelbach School

In Eichenau there is a wide range of leisure activities. There is a bathing area with a lawn, beach volleyball court , water watch station and a skate park , which consists of a half pipe, quarter pipe, trick box and rail.

Another leisure area is located on Budrioallee , where there are 2 other beach volleyball courts, a street basketball court , a small football field, a cross-generational fitness course, a large tennis facility of the TC Eichenau with 3 indoor courts and 10 outdoor courts, a multi-gym and several large soccer fields. The Eichenauer Sportverein eV was founded in 1926 and (as of 2011) has 1,400 members in 9 departments. The footballers are organized with their own club house in FC Eichenau. The Eichenau eV tennis club is also located there

In the school south there is a shooting club called "Immergrün Eichenau", the first club in Eichenau. The Eichenauer See is about 1 hectare in size. There are sports areas and a summer curling alley run by FC Eichenau.

Municipalities in the Fürstenfeldbruck district