State roads are a road category in Germany , Austria and Italy (South Tyrol), the construction loads of which are usually borne by the respective German , Austrian federal state or the respective Italian province .

As a rule, these are streets whose catchment area in Germany extends beyond the area of ​​a district or an urban district , in Austria beyond a political municipality .

In Switzerland, comparable roads are called canton roads . In the Principality of Liechtenstein , rural roads are specifically roads whose construction load lies with the State of Liechtenstein, i.e. also national roads throughout.

Station sign at km 2.0 on the L 262 in Landsweiler-Reden (Saarland) (2nd order state road, corresponds to the district roads in other federal states)

The mileage is marked with station signs. The beginning and end of national road sections are identified with so-called network node numbers. This makes the localization clear, which is important, for example, for quick help in the event of an accident. The network node numbers are indicated at the top of the label. These also show the direction where the station numbers are located. In the example in the picture, left from No. 6608 039 to 6608 023 right. At the bottom right of the sign you can see the so-called stationing direction. In our example, it runs from right to left. It indicates in which direction the road kilometers are counted.

In some federal states, section numbers are used on the station signs to make it easier to identify road sections.

In the physical structure country roads tend to have a slightly smaller extension state than national roads, the road cross sections are smaller in general. In individual cases, however, the expansion may vary depending on the construction time and the importance of the traffic. 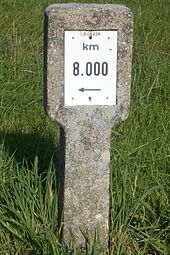 Due to the distribution of the financial resources, the federal states usually endeavor to rededicate the heavily developed state roads to federal roads, so that the expansion and maintenance are provided from the federal budget. However, the federal highways are usually connections between large cities (regional centers) and run towards them in a star shape. In the case of circular connections between satellite cities, it is usually not possible to designate them as a federal road, and it is also difficult to convert additional short spur roads in large cities to passing highways under federal sovereignty.

The GDR divided the last to the highways subordinate roads in those first and second order (LIO, LiIo) as it was introduced in 1934 (see above) . After German reunification , these roads became state roads regardless of their condition. Thuringia, for example, converted the LIO 27 into the L 1027 and country roads of the second order were given 2000 numbers accordingly.

Due to the economical expansion of the regional road network in the GDR, there are some farm roads and roads with a water-bound surface layer in the East German federal states . Sometimes one of two parallel streets fell into disrepair or the connections between them due to minor traffic importance. Formally, there are state roads such as the L 208 between Burkersroda and Balgstädt in Saxony-Anhalt that do not meet the regulations. The expansion of these connections is hardly to be expected due to the lack of financial resources from the federal states and the subordinate importance of transport. Usually a reallocation is planned if the meaning is missing.

In Austria today, all higher-level roads, with the exception of the motorways and expressways managed by ASFINAG , are state roads. The former federal  highways B are also state roads, since they have been the competence of the federal states since 2002 .

The designation is for former federal highways, except in Vorarlberg , with the B prefixed earlier  . The other state roads are marked with an L in front  . In contrast to federal  highways A and  S , the abbreviations are usually not shown on traffic signs . Designations with few digits indicate greater importance in the road network. The designation of higher-ranking state roads as state main roads  ( LH ), which was previously used in several federal states, can still be found sporadically in street maps and local maps and in the class Hauptstraße  A in Vienna (Hauptstraße B are the higher-ranking former federal roads  )

Lists of federal and state roads in Austria

In Poland, the national highways that correspond to the German federal highways are called Droga krajowa , which can be translated literally as “state road”.