This article explains the administrative unit in Germany, for other terms see district (area) .

Districts or administrative districts in Germany, independent cities (called Stadtkreis in Baden-Württemberg) are marked in yellow.

A district (abbreviated Luke , distr , Lkrs or Landkrs. ) Or county (abbreviated Kr ) is under German municipal law , a community association and a local authority . He administers his area according to the principles of local self-government . Most countries use the term county . In North Rhine-Westphalia and Schleswig-Holstein , however, the name is district . The Basic Law for the Federal Republic of Germany only knows the designation circle , z. B. in Art. 28 para. 1 sentence 2. There are no districts in the city-states of Berlin , Bremen and Hamburg . 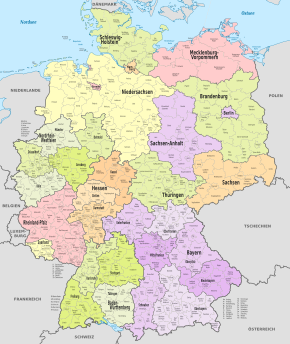 Organs of the circle are

It grants benefits in accordance with Book XII of the Social Code (social assistance) , organizes local public transport , sets up nature and landscape protection areas and maintains them. He takes care of the waste disposal . He is responsible for rescue services and fire and disaster control , health and food monitoring . Further tasks are the control of animal diseases and animal welfare , the driving license system , the vehicle registration as well as the construction and maintenance of the district roads . It is responsible for the vocational schools and the special schools . In some federal states he is responsible for the management of the real estate cadastre and in this context can carry out measurements on properties and buildings. He operates local family policy . For smaller communities he takes the youth care, care and education is true and Bauaufsichts authority.

Some municipalities belonging to a district may have special names that they have received due to their history or size, examples: city , market , town , mountain town, etc. Names of this type are often irrelevant under administrative law.

Some cities belonging to the district receive a special administrative status in different countries due to their population size, which is connected with the transfer of further tasks. This happens differently from country to country on application or ex officio as soon as the prescribed number of inhabitants is reached. The threshold is also set differently in the countries. In Baden-Württemberg it is 20,000, in Hesse 50,000, in North Rhine-Westphalia and Rhineland-Palatinate 25,000 and 60,000 inhabitants respectively. These special status cities remain part of the district, but then have a special designation, e.g. B. Mittelstadt , Large District Town , Large Independent City , Medium District City or Large District City .

Associations of municipalities below the district level

Not all communities have their own administration (“unitary community”). Many work together in administrative cooperations to carry out their administrative business . These have different names, characteristics and competencies depending on the federal state.

Independent cities do not belong to any district. In Baden-Württemberg they are referred to as city ​​districts .

On July 4, 1964, the city of Göttingen was considerably enlarged by incorporating neighboring communities. However, these communities were particularly important to the survival of the district . So it was decided to incorporate Göttingen, which had become a large city, into the district, but to give it special rights as a city that was not a district.

On July 1, 1966, the city of Siegen was considerably enlarged by integrating neighboring communities. The state of North Rhine-Westphalia based itself on the example of Göttingen. The city was incorporated into the district of Siegen and received special rights that otherwise only independent cities are entitled to. On January 1, 1975, it was considerably enlarged and became a large city, but at this point in time several large cities were formed that belonged to districts or lost their district freedom. Since Siegen was no longer a special case, the city lost its special rights.

On January 1, 1974, the state capital of Saarbrücken was merged with the district of Saarbrücken to form a new administrative unit, the Saarbrücken City Association . However, the city did not receive any special rights.

On November 1, 2001, the state capital Hanover and the surrounding area were organizationally merged in the Hanover region . In it, the communities of the former district of Hanover and the city of Hanover were combined. Hanover retained many rights as an independent city.

For the purpose of coordination and the representation of political interests, all 294 districts are united in 13 regional associations and at the federal level in the German District Association (DLT) . This represents 74% of the transport authorities, 68% of the population and 96% of the area of ​​Germany.

Administrative units on the scale of today's rural districts were the counties in the Middle Ages , which became more and more independent due to the inheritance of the count's office and were involved in often armed conflicts over territories and succession regulations. Since the 16th century, the many principalities and free cities of the Holy Roman Empire were largely grouped together in imperial circles that had the dimensions of today's German states.

In the 17th and 18th centuries, administrative units were formed in the Margraviate of Brandenburg and other parts of Prussia, which were referred to as district councils . Among other things, they served the self-administration of tax collection from the manorial nobility and the population of the "flat country". The aristocracy resident in the district elected a member of the district administrator from among their number, who was appointed or confirmed by the sovereign. In addition to collecting the taxes and forwarding them to the war and domain chambers, the district administrators were also responsible for organizing the supply and accommodation of units marching through and distributing the burdens as fairly as possible among all district residents. Gradually, the district administrators were also used by the sovereign higher authorities to mediate and enforce orders and regulations of the central administration and as a collection point for statistical information from the district. From 1816 to 1818, districts were established as the lower state administration in the Prussian provinces (see history of district formation in Germany ), in the then Electorate of Hesse (from Rinteln to today's northern districts of Frankfurt am Main) in 1821, in most of the German ones States, however, did not exist until the mid-19th century until 1886.

The quality of the district as a municipal district was based on the ideas of the Prussian statesman Freiherr vom Stein . Based on the model of the city ​​order of 1808, self-government should also be introduced in rural areas. His proposal was only implemented in Prussia under the influence of Rudolf von Gneist's ideas in the 1880s, when the first district ordinances were issued (see district reforms in Prussia ), e.g. B. for the Prussian Province of Hanover in 1885, the Province of Hesse-Nassau in 1886, the Province of Westphalia and the Rhine Province in 1887.

In the course of the century, most of the other German states adopted the principle of district division, but in some cases with different names, e.g. B. Amtshauptmannschaft (Saxony), District Office (Baden, Bavaria), Oberamt (Württemberg), District Office (Anhalt, Hesse, Thuringia), Office (Oldenburg) and District Directorate (Braunschweig). In Prussia only the districts used the name Landkreis, the district seat of which was in a corresponding city district, so that the same place name did not lead to confusion. With Section 1 (3) of the Third Ordinance on the Rebuilding of the Reich of November 28, 1938 (RGBl. I, p. 1675), these administrative districts were given the designation Landkreis with effect from January 1, 1939 .

Up until the first half of the 20th century there were around 1,000 districts or corresponding administrative units at the lower level in the German Reich ; In principle, their size should be such that the district administrator could go there and back to the most distant municipality in his district in one day and there was still enough time for him to do his official business. However, the size of the districts was quite different from country to country. The areas in the sparsely populated north and east of Germany (Prussia, Mecklenburg, Saxony) tended to be significantly larger than in the more densely populated south and west. Due to savings measures in the wake of the Great Depression of 1929, the number of German districts decreased noticeably when a number of smaller administrative districts were dissolved.

In its judgment against the introduction of five great districts in Mecklenburg-Western Pomerania in 2007, the state constitutional court was also guided by the travel times: Districts must be designed in such a way that district council members are able to volunteer in the district council and in its committees. It is doubtful whether the MPs in the largest of the new great districts will be able to obtain their own knowledge of the conditions in remote areas in a reasonable time in order to decide whether a road should be built or a school or a museum should be built or closed.

Since the territorial reform in Mecklenburg-Western Pomerania in September 2011, of the 294 district seats in Germany (including the special forms in Saarbrücken, Hanover, Aachen), 78 go back to a district administration established in the old Prussian area before 1866 and 80 to Bavarian district offices.

The historical overview shows the designation for the districts in the countries of the German Reich in 1938.

The most populous and least populous districts in Germany were on December 31, 2016: