The Vulkaneifel district ( Daun district until December 31, 2006 ) is a regional authority in the north-west of Rhineland-Palatinate . It is located in the Eifel and is the smallest district in Rhineland-Palatinate in terms of population and the fourth smallest in the Federal Republic of Germany . The seat of the district administration and at the same time the most populous city is Daun .

The Vulkaneifel district is located in the western part of the region of the same name with altitudes between 150 and 700 m. Due to the earlier volcanism , numerous mineral springs (sour wells) were created. The Kyll flows through the district in a north-south direction. The district is also crossed by the Deutsche Wildstrasse , the Deutsche Vulkanstrasse and the Eifelsteig .

enlarged. On January 1, 2007, the name was changed to the Vulkaneifel district .

The district has been part of the Trier Region Initiative (IRT) since 1994 .

On January 1, 2007, the former Daun district was renamed the Vulkaneifel district on the initiative of the then district administrator Heinz Onnertz . A few years earlier there had been efforts to change the name. At the time, the initiative came from the CDU parliamentary group in the Daun district. At that time, however, also at the insistence of the population, this was rejected and also not supported by the other parties in the district assembly.

The district of Vulkaneifel has a coat of arms as well as a hoist and a banner flag .

In the Future Atlas 2016 , the Vulkaneifel district was ranked 265 out of 402 districts, municipal associations and independent cities in Germany, making it one of the regions with a “balanced risk-opportunity mix” for the future.

The Vulkaneifel district is traversed in a north-south direction by the Eifel line Cologne - Trier , which was opened in 1870/71 by the Rheinische Eisenbahn-Gesellschaft . At it is the Gerolstein junction , which the Prussian State Railways took as the starting point for the branch lines to Prüm and Daun-Mayen, which went into operation in 1883 and 1895. From 1909/10 there was a cross connection from the last-mentioned railway in Daun to the Moselle main line in Wengerohr (today Wittlich Hbf).

In 1912, the following routes were added for military reasons, which branched off the main line through the Eifel:

The network was 179 km long. Of this, only 37 km are left for regular passenger traffic after sections of 104 km were shut down in the post-war years:

This Eifelquerbahn was used again from 2001 to 2012 after a ten-year break by the Vulkan-Eifel-Bahn operating company on weekends as well as on weekdays during the summer holidays.

The eastern district is touched by the A 1 (Trier – Cologne) and A 48 (Trier – Koblenz ) motorways . Furthermore, several federal , state and district roads run through the district area, including the B 257 , B 410 and B 421 .

(Seat of the municipal administration *) 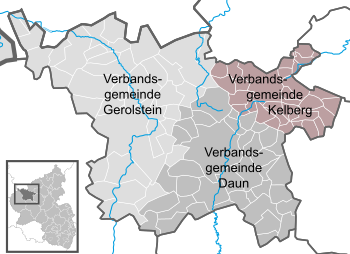 The following municipalities in the district were incorporated:

On July 1, 1956, the Daun district was assigned the distinctive sign DAU when the vehicle registration number that is still valid today was introduced . It is continuously issued in the Vulkaneifel district to this day.

In the north-western part of the district there are remains of the former Siegfried Line .

Counties and independent cities in Rhineland-Palatinate